Mike Zunino, who had been slated to spend the season in AAA, instead will rejoin the Mariners after they lost backup catcher Steve Clevenger with a broken hand. 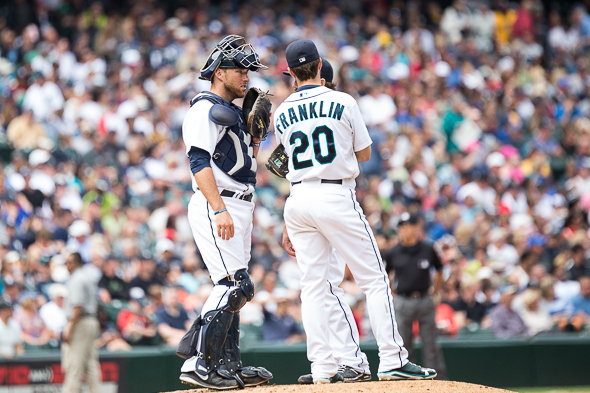 Mike Zunino is back with the Mariners. / Drew Sellers, Sportspress Northwest

The Mariners Thursday recalled C Mike Zunino from AAA Tacoma as a replacement for Steve Clevenger, who had a bone fractured in his right hand from a foul tip in Wednesday’s 8-1 loss to the Pittsburgh Pirates. Zunino was to be on hand for Thursday’s 7:10 p.m. contest against the Baltimore Orioles at Safeco Field while Clevenger will go on the 15-day disabled list.

The Mariners also recalled reliever Tom Wilhelmsen from the Rainiers and optioned reliever Donn Roach back to AAA.

“I knew he would be back at some point,” manager Scott Servais told reporters before the game. “I didn’t know if it would be June 1st, July 1st or August 1st. Sometimes the situations and circumstances dictate that. It’s kind of what happened here. But he’s earned it. He’s made some adjustments. He’s made strides. He still does a great job behind the plate.”

Seattle’s Opening Day catcher in 2014 and 2015, Zunino lost his job late last season after he consistently failed to hit major league pitching. Zunino batted .174 in 112 games, the worst by a Seattle starting catcher. After that, the Mariners sent Zunino to the Arizona Instructional League, then declared his season over.

New Seattle GM Jerry Dipoto quickly determined that Zunino, who had been rushed to the majors too soon by former GM Jack Zduriencik, needed to spend 2016 in the minors in order to revive his career.

At the Mariners’ annual spring luncheon in January, Dipoto sounded eager to bring back Zunino from the professionally dead.

“This (year) is going to be about what’s best in the career development of Mike Zunino,” Dipoto said. “And (we) are going to make sure that happens.”

That plan changed, if only temporarily, with Clevenger’s injury.

Wilhelmsen, 32, had two relief appearance in Tacoma, pitching three innings and giving up a run. He was signed to a major league contract and added to the  25-man roster June 22. He made one appearance for Seattle, tossing one scoreless inning June 23 at Detroit, before being optioned to Tacoma June 24.

Clevenger, 30, broke the third metacarpal on his right hand. It will require surgery and Clevenger is expected to miss two months.