Mike Zunino couldn’t have asked Hollywood for a better script for his first plate appearance after being called up from the minor leagues. 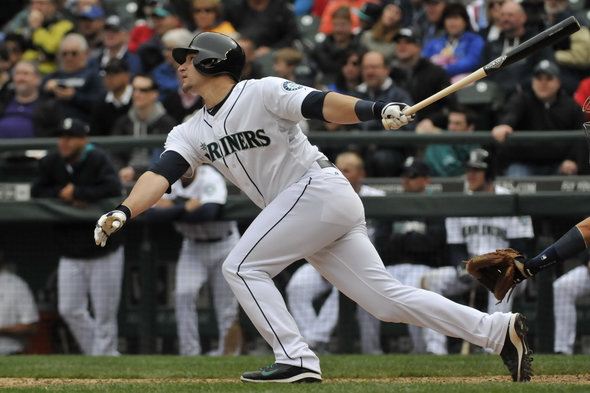 The current Mike Zunino era is off to a better start than the past one.

In his first action since being recalled from Triple-A Tacoma, the Mariners’ cast-off catcher blasted a two-run homer in his first at-bat Saturday in the second inning. He hadn’t been in the bigs since August, when the post-Jack Zduriencik Mariners sent him to Tacoma to work on his swing.

So far, so good. Zunino hit a 1-2 curve ball into the visiting bullpen in left field to give Seattle a 5-0 lead.

That eye-opening debut nearly overshadowed the mammoth blast of Nelson Cruz in the first inning.

Cruz’s 459-foot, three-run homer hit the front of the upper deck in left. It’s one of the longest home runs by a Mariner at Safeco Field. Richie Sexson’s 467-foot blast in 2006 is unofficially regarded as the longest.

Zunino spent almost three months in Tacoma while veterans Chris Iannetta and Steve Clevenger held down the job with the Mariners. The No. 3 pick in the 2012 MLB draft, Zunino has been a major disappointment offensively and hit a low last season when he was demoted to Tacoma.

Clevenger’s hand was broken Wednesday night on a foul tip — he’s out probably for two months — and opened the door for Zunino.