A career-first grand slam by Seth Smith helped complete a four-game rout of the AL East-leading Baltimore Orioles, who came in riding a seven-game winning streak and left shaking their heads. 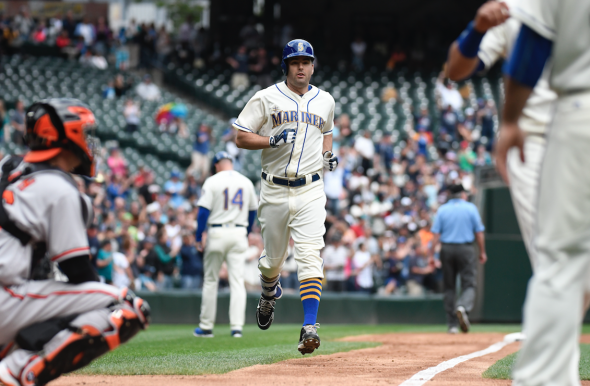 It’s been four years since the Mariners have swept a four-game series against anyone, much less a division leader that showed up for the weekend packing MLB’s fourth-best record after a seven-game winning streak. But after Sunday afternoon’s 9-4 wallop of the Baltimore Orioles (box), the rare deed was done and it was time to light up a cigarette and talk about it.

“It’s big anytime, especially against a team like that,” said LF Seth Smith, who contributed his career-first grand slam and had home runs in each of the four wins over the O’s.

“We asked them to pick up their intensity a little bit,” said manager Scott Servais, who seemed to out-maneuver his long-tenured Orioles’ counterpart, Buck Showalter.

“There was a game in Detroit that really was bad with the energy,” said 3B Kyle Seager. “It’s completely turned around.”

That game likely was a desultory 8-7, 12-inning flop June 20, part of six-game losing streak in a 2-8 road trip. After that grimness, anyone who was envisioning a pending sweep of the AL East leaders  should hustle down to Las Vegas before the pharmaceuticals wear off.

But here it is, midseason, and the Mariners are 43-39, tied for second in the AL West. They’re still more than a week behind the division-leading Texas Rangers. But they remain engaged in the wild-card pursuit and, for the moment, they have contributions flowing from nearly everywhere.

“Leonys Martin has great energy, always on the top stop of the dugout,” Seager said.  “You get the other guys, playing and not playing, staying right there, being active in the game, cheering, pulling for each other a little bit harder.

“It’s a long season. You get tired, you get lulls. but you look at the good teams, there’s a different energy about them.”

After 31 runs that included 10 home runs in the series, the Mariners, in terms of energy production, looked like Grand Coulee Dam. Especially in the eighth inning of an outcome still in the balance with the Mariners leading 6-4.

With one out, 2B Robinson Cano singled. DH Nelson Cruz doubled. Seager doubled. 1B Adam Lind doubled. Three runs were in, and the Orioles sought to get out of town on the nearest Saturn V rocket booster.

The Orioles were a little stunned.

“Sometimes you are going to run into it,” said Orioles RF Mark Trumbo, a Mariner last season. “I don’t think anybody would have matched up very well with them this series.”

The series wasn’t necessarily a freak, because the Mariners began the season 28-18. Then a passel of injuries knocked them from the lead and their emerging swagger. With a 7-2 home stand concluded, it’s possible to see a restoration of the earlier competence.

Then again, another key injury, and the slide can renew.

In the first year of new general manager Jerry Dipoto’s remake, he put together a starting nine that was at least major league average, populated with enough mid-career veterans on the opening-day, 25-man roster to be MLB’s oldest team, and in the middle of the payroll standings at $140 million.

There was little depth on the roster or in the minors. Dipoto so far has been adroit with his spackling blade, filling holes on the mound from the farm with James Paxton and rookie Edwin Diaz. He fetched veteran reliever Tom Wilhelmsen from the consignment store.

Then for one game, he appeared to be a Stephen Hawking-level genius for returning a fully developed catcher, Mike Zunino, from AAA to a two-homer debut Saturday in a 12-6 triumph. But you know what is said about sample sizes . . .

It is all well and good for Seager to emphasize the emotional uptick, apparently spawned at a team meeting after an odious 8-1 loss to Pittsburgh Wednesday. But it remains a game of talent, and the Mariners still don’t have a starting rotation that can be counted on to give three good outings every five games.

Even the normally reliable Hisashi Iwakuma was knocked around Sunday, giving up 10 hits among his 78 pitches. Erstwhile starter Nathan Karns has been demoted to the pen, Wade Miley has been shaky, and Taijuan Walker has a sore foot that may linger longer than any previous injury he’s experienced.

Maintaining success must come in some small part from reliance upon the veteran arm of Wade LeBlanc, a 31-year-old AAA farmhand acquired from Toronto whom Dipoto knew from the days when both were with the Angels.

After acquiring him via trade, LeBlanc has given up two earned runs in 12 innings in the fashion of former Mariners hero Jamie Moyer, who tossed pillows and marshmallows at awkward times and places, whereupon batters corkscrewed themselves into the ground with overwrought swings.

“Baltimore came in here really hot,” Servais said. “And when we’re locked in and everybody’s engaged and doing their job, we’re pretty good.”

Whether all this is sustainable, no one knows. But 31,405 at Safeco Field Sunday will tell you it is amusing as hell. For anyone taking a look beyond the walls of Safeco to the wide world, a haven for amusement is good.