A graduate of Bellevue’s Newport High School and the University of Washington, Jeremy Taiwo finished second to defending Olympic champion Aston Eaton and made the U.S. Olympic team Sunday. 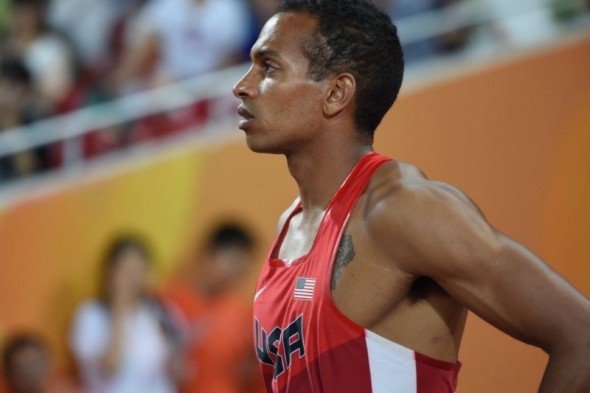 Jeremy Taiwo ran the 1,500 of his life to finish second in the decathlon at the U.S. Trials in Eugene Sunday. / gofumdme.com

EUGENE, OR. – So many injuries and so many operations later, Jeremy Taiwo is headed to the Summer Olympics. Taiwo is now recognized as one of the world’s greatest decathletes, but he admits there were times he considered quitting, before everything came together Sunday at the U.S. Olympic Trials.

“You want to give up,” the former Washington Huskies star acknowledged after winning a silver medal at Oregon’s Hayward Field. “You wanted to not go to practice. You wanted to just go work at Whole Foods or something, because it hurts to be a decathlete all year round.

No doubt Taiwo (pronounced TY-wo) will be racing to the bank to cash the $8,000 check he earned for two days of work in Eugene. Of course, a lifetime of work is actually what led to his relatively big payday.

“I can pay my rent this month,” Taiwo said with a smile.

Taiwo bemoaned the fate of the oft-forgotten – and oft-broke — decathlete after scoring a career-best 8,425 points to finish second to world record-holder and reigning Olympic gold medalist Ashton Eaton. Only the 8,750 points Eaton scored Sunday rank ahead of Taiwo’s mark on the 2016 world leaders list (decathlon final results here).

Still, Taiwo insisted, “I’m living below the poverty line. I was only able to train this year because I had a gofundme” account.

Taiwo’s account said $17,311 was raised by Sunday night. Taiwo, a Renton native and a graduate of Newport High School in Bellevue, shares a small Seattle apartment with girlfriend Justine Fedronic, a former Stanford runner. Fedronic will join Taiwo at the Olympics as an 800-meter runner for France.

Taiwo came in second behind Eaton (a Eugene resident who starred at Oregon) after the first five events Saturday, but he slipped to fourth Sunday before running one of the fastest 1,500s of his life in the 10th and final event. He pushed the early pace much harder than usual and finished in 4 minutes, 17.35 seconds before an appreciative, near-capacity crowd of 22,424.

Eaton, two years older than Taiwo at 28, is the prohibitive favorite to win the Olympic gold medal Aug. 17-18 in Rio. Taiwo concedes nothing.

“He’s not untouchable,” Taiwo said. “I mean, he’s in the prime of his life for being a decathlete. If someone (else) is coming close to their prime and they have a really, really outstanding meet, it could happen.”

That someone just might be Taiwo, who lost one high school season and one college season to injuries and the surgeon’s knife. There were plenty of other injury setbacks along the way, yet he won the Pac-10 championship in 2011.

“All my hard work and all my faith in my abilities and the love and support I get from my family: I was just hoping that would pay off and make my dreams come true,” Taiwo said.

Taiwo was coached in high school by his father, Joseph, a two-time Olympics triple jumper from Nigeria. Jeremy said his father and mother, a University of Washington Law School graduate, attended Washington State as undergraduates.

Taiwo said the support of his parents has been invaluable during his up-and-down track and field career.

“I need to go give my parents a longer hug and thank all my (other) family and friends that were here,” Taiwo said. “I’ll probably eat a huge hamburger and pizza, something like that. But all gluten free.”

Ah, c’mon, Jeremy. Live it up a little. One pepperoni pizza never killed anyone, even the second-ranked decathlete in the world.