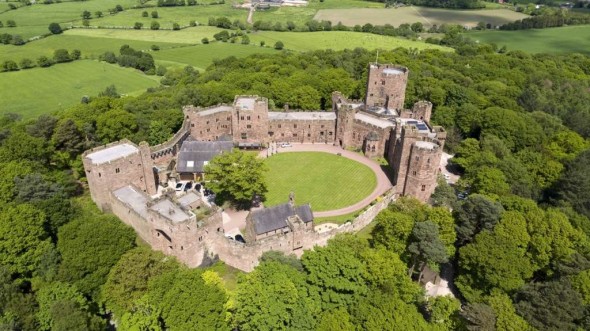 Peckforton Castle, which appears to have a field less than Russell Wilson’s oft-required standard of 100 yards by 53 and a third./ FameFlynet

No Brexit for Russell Wilson — the Seahawks QB married pop diva Ciara Wednesday in posh Peckforton Castle near Liverpool, England, according to TMZ. So far no report regarding what happened next for perhaps the world’s most well-known celibate celebrity couple. Undoubtedly, TMZ will find photos.

The website said invitees to the private ceremony were forced to turn over their cell phones, lest someone reveal the game plan. Wilson offered up one picture on his Instagram account.

Wilson proposed in March, before which he told the world, in this video interview at the Rock Church. that the couple was planning to maintain celibacy until marriage. Probably more than you wanted to know, but hey, this couple is out there.

Here’s Ciara’s response during an interview on The View.

No word on the honeymoon, but if New England Patriots CB Malcolm Butler shows up again, Wilson may be moved to cuss.