Thiel: Many chances, none good for Sounders

The Sounders peppered the target with 22 shots but came away with nada in a 1-0 loss to the LA Galaxy that was perhaps Seattle’s most agonizing defeat of the season. 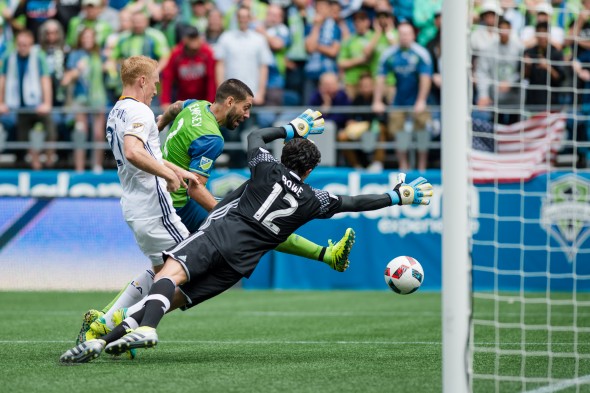 If you recall the carnival-game experience of throwing balls at rows of animal bean-bag targets, needing to knock off three to win a plush toy, you know how the Sounders felt Sunday at the Clink against the Los Angeles Galaxy.

They spent a wad of bills — 22 shots, in fact — peppering the target. No plush three points. No single point. No nothing. If you’re a dad, your kid walks away quietly, head down.

For about the final 60 minutes, the last-place Sounders dominated the nettlesome Galaxy in a nationally televised event, only to fall 1-0 in perhaps the most agonizing loss this season among many (5-10-2) from which to choose.

Asked for an analogous soccer experience, coach Sigi Schmid had to go all the way back to his college playing days at UCLA, where the Bruins had 38 shots and lost to Fresno State 1-0. If that comparison wasn’t enough, Schmid ventured into space.

“If you landed from Mars and looked at the game, not the score,” he said,  “the guys from Mars would say we won the game.”

But the Martians would also wonder why the Earth creature Zach Scott fell down in the 15th minute while marking Galaxy captain Robbie Keane, giving the Sounders’ nemesis room for a point-blank blast from 10 yards that hit the crossbar and bounded into the net for the game’s only score.

Gravity, the Martians might be told, is heavier on Earth.

Certainly, the standings say so regarding the Sounders, the first team at MLS’s midseason to reach double-digits in losses. The Sounders have one win in the past seven games, with the next five this month against Western Conference foes.

The atmosphere of despair was sufficient for a reporter post-game to ask Schmid if it was time for him to resign.

What he did say, with conviction, is that in this match, which featured Clint Dempsey for only the 11th time this season, the defeat was not because of a lack of will.

“I certainly can’t fault them for their effort, their character and their play,” he said. “But only one statistic counts at the end.”

The stats fleshed out the context. The Sounders had an incredible 21 open-play crosses to the Galaxy’s nine, and a 61.6 percent plurality in possessions. A new lineup up top featuring three forwards of Dempsey, rookie Jordan Morris and Nelson Valdez seemed to work well. But not a finish was among them.

Dempsey had seven shots, including one late in the game where he controlled the ball off his chest a few feet from the far post, dribbled it once with his head for control, then left-footed a short shot that found wood and skittered out of play.

Morris also had a juicy chance when he drew GK Brian Rowe off his line in an attempt to tackle Morris and the ball. Morris emerged unscathed to stare into an open net, only to find Galaxy defender A.J. DeLaGarza jumping in to deflect the shot off his hip.

So the Sounders remain with the fewest goals, 14, in MLS, due in part to the temporary absence of Dempsey and the permanent absence of Obafemi Martins (China), plus a mash of veterans and young players who lack cohesion.

In the view of newcomer Herculez Gomez, who subbed in Sunday, the Sounders have probably asked too much of young players.

“If we are asking the young guys to get results then we are in a bad position,” he said. “There are guys that we need to groom and teach them the right things.

“I love the young guys on this team. I only wish that they were more willing to make mistakes because that’s the only way you’re going to learn. Nowhere in the world are you going to see a team where it’s all young kids, and they are figuring it out by themselves. We need to be there for them.”

Naturally, Schmid is not quite ready to concede the season, even after the Sounders fell to 0-8-2 when conceding the first goal.

“All you can ask your team to do is create chances, fight, and help each other,”  he said. “We did all that. And we came away with nothing.

“I feel strongly if we continue to (create chances), it will turn around.”

Until they do, in the words of Yogi Berra, it’s getting late early here.