The all-time all-stars from the Evergreen State

With a bow to the All-Star break Tuesday, here are five Washington-based All-Star teams, based upon the best individual single seasons ever recorded by position. 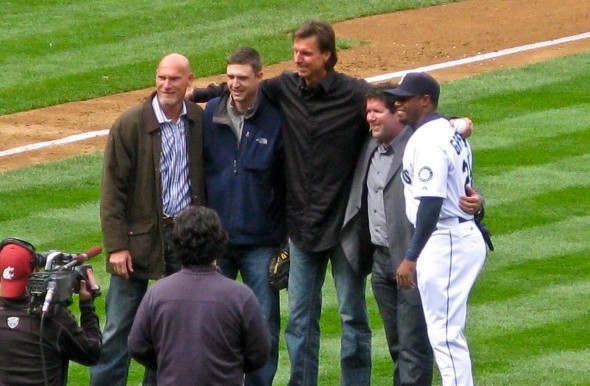 Baseball fans have debated over all-star selections forever. Thanks to the wonders of technology – combined with an aging sports writer’s dogged research and cluttered memory bank – baseball fans can now debate the merits of five Washington-based all-star teams listed below.

With a bow to the annual major league All-Star Game Tuesday in San Diego, our picks focus solely on a player’s best season in the major leagues, save for our all-names team. We’ve put together one all-star collection of Seattle Mariners as well as teams made up of former Washington high school, college and minor league players.

So many years, so many teams, so many players. If we missed your favorite player, let us know.

Outfield – Ken Griffey Jr., 1997. Choosing Junior’s greatest season is akin to choosing the greatest sunset, but ‘97 was special even by Griffey’s lofty standards. The Hall of Famer was named the AL’s Most Valuable Player after leading the league with 56 home runs, 147 RBIs, 125 runs and a .646 slugging percentage. He won a Gold Glove, hit .304 and had a .382 OBP. 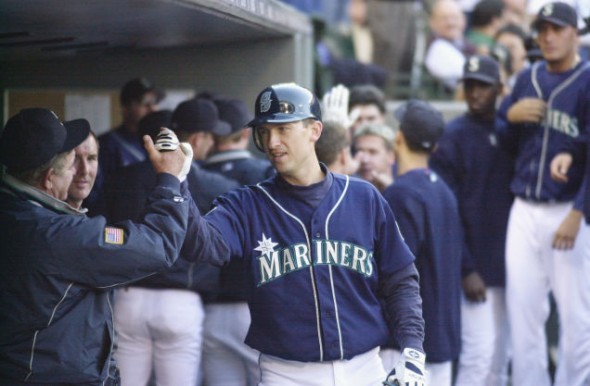 Before he was a star for the Mariners, John Olerud helped lead Bellevue’s Interlake High School, Washington State and the Toronto Blue Jays. / David Eskenazi Collection

Catcher – Sammy White, Lincoln (Seattle). White established career highs in 1954 when he hit .282 with 14 home runs and 75 RBIs for the Boston Red Sox. He threw out 41 percent of would-be base stealers.

Shortstop – Kevin Stocker, Central Valley (Spokane Valley). Stocker joined the 1993 Philadelphia Phillies at midseason and helped the Phils reach the World Series before bowing to Olerud’s Blue Jays. Stocker hit .324 with a .409 OBP in 70 games as a 23-year-old rookie.

Outfield – Bob Johnson, Tacoma (Stadium High). Johnson starred on routinely awful teams with the Philadelphia (now Oakland) Athletics. He was never better than in 1939, when he hit .338 with a .446 OBP and a .553 slugging percentage. He pounded 23 homers, drove in 114 runs and scored 115 runs.

Designated hitter — Richie Sexson, Prairie (Vancouver). Sexson quickly petered out during his time with the Mariners, but he blasted 45 home runs and drove in 124 runs for the 2003 Milwaukee Brewers. His slash line:  .272/.379/.548.

Utility – Willie Bloomquist, South Kitsap (Port Orchard). Bloomquist played every position but pitcher and catcher during his 14 years in the big leagues, including nine as a Mariner. He hit .302 in 80 games with Arizona in 2012, when he had a career-high 21 doubles (but no home runs).

Left-handed starting pitcher – Vean Gregg, Clarkston. Arm trouble shortened Gregg’s career, but he went 23-7 with an AL-leading 1.80 ERA as a rookie for Cleveland in 1911. He completed 22 of 26 starts and threw five shutouts.

Right-handed starting pitcher – Tim Lincecum, Liberty (Renton). Lincecum won his second consecutive Cy Young Award as the National League’s top pitcher in 2009. Lincecum posted a 15-7 record and 2.48 ERA for San Francisco. He led the league with four complete games, two shutouts and 261 strikeouts in 225.1 innings. His WHIP was a career-best 1.047.

Bullpen closer – Randy Myers, Evergreen (Vancouver). Myers was lights-out for Baltimore in 1997, when he won the reliever of the year award in the American League. He led the league with 45 saves and had a microscopic 1.51 ERA in 61 games.

Manager – Fred Hutchinson, Franklin (Seattle). “Hutch” guided the 1961 Cincinnati Reds to the National League pennant with a 93-61 record. The Reds lost to the New York Yankees in the World Series. Third base – Ron Cey, Washington State. The former Mount Tahoma High star hit a career-high .283 in 1975, when he clubbed 25 homers and drove in 101 runs with the Dodgers.

Outfield – Billy North, Central Washington. North led the American League with 75 stolen bases in 1976, when he hit .276 with a .356 OBP for the Oakland Athletics. North attended Garfield High in Seattle.

Outfield – Mike Kinkade, Washington State. One year after winning an Olympic gold medal with the U.S. team, Kinkade hit .275 in 61 games with Baltimore in 2001. He hit four homers and drove in 16 runs.

Designated hitter – Scott Hatteberg, Washington State. Hatteberg, who starred for Eisenhower High in Yakima, batted .284 with 15 home runs and 82 RBIs for Oakland in 2004. His OBP was .367. Mark McGwire was a star in AAA Tacoma before he was “big” in the majors. / Wiki Commons

First base – Mark McGwire, Tacoma. McGwire admitted to using steroids when he shattered the major league home run record (latter broken by Barry Bonds) with St. Louis in 1998. In addition to his 70 dingers, McGwire drove in 147 runs, hit .299, had a .470 OBP and slugged .752.

Shortstop – Maury Wills, Seattle/Spokane. Wills made speed sexy again by stealing a then-record 104 bases for the 1962 Dodgers. He was named National League MVP after scoring a whopping 130 runs. Wills is a former Mariners manager.

Outfield – Tommy Davis, Spokane. Davis led the National League with a .346 batting average, 153 RBIs and 230 hits during a monster 1962 season with the Dodgers. He crushed 27 home runs, scored 120 runs and struck out just 65 times in 711 plate appearances. Davis played for the 1969 Seattle Pilots during the club’s lone season in the American League.

Designated hitter – Chris Davis, Spokane. Davis ranked first in the American League with 53 home runs and 138 RBIs for Baltimore in 2013. He hit .286 and put up a .634 slugging percentage.

Bullpen closer – Rafael Soriano, Everett/Tacoma. The hard-throwing right-hander led the American League with 45 saves for Tampa Bay in 2010. He had a stingy .082 WHIP and 1.73 ERA with just 36 hits allowed in 62.1 innings spread over 64 games.

Set-up reliever – Mark Lowe, Everett/Tacoma. Lowe was unhittable at times with the Mariners last season, when he chalked up a 1.00 ERA in 34 games. He struck out 47 in 36 innings before pennant-seeking Toronto acquired him from the fading Mariners at the trade deadline. He finished 1-3 with a 1.96 ERA in 57 games.

Manager – Bruce Bochy, Spokane. The San Francisco Giants manager has won more games and World Series than Tommy Lasorda, so speculation is high that Bochy will become the third former Spokane manager in the Hall of Fame. Lasorda made it as a manager, Duke Snider as a player. Bochy’s Giants won three World Series from 2010-14.

*Minor leaguers were selected from individuals who played or managed a total of 50 or more games (20 for pitchers) with Washington minor league teams prior to the bulk of their major league careers.