Mike Montgomery pitched 6.1 shutout innings in a spot start to help the Mariners to a win in Kansas City. Meanwhile, in Everett, Felix Hernandez pitched his first game since May 27. 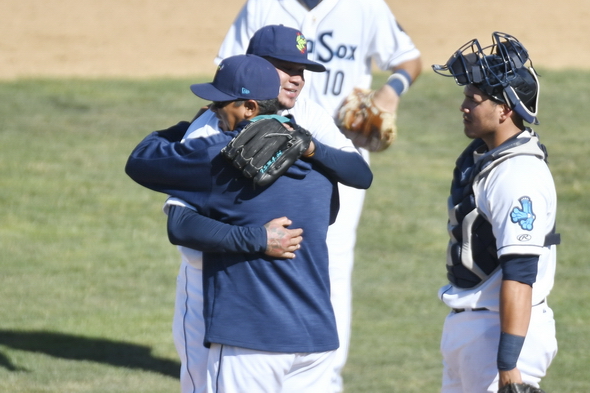 In Everett Sunday, after Felix Hernandez had his first rehab start, his brother, Moises, the Class A Aquasox pitching coach, gets a hug as he takes the King from the game. / Alan Chitlik, Sportspress Northwest

Pressed into a starting assignment when Taijuan Walker was placed on the disabled list (tendinitis), reliever Mike Montgomery delivered one of Seattle’s better pitching performances of the season Sunday as the Mariners closed out the first half with an 8-5 victory over Kansas City at Kauffman Stadium (box). Seattle reached the All-Star break at 45-44, only the second time since 2010 it has done so with a winning record.

Montgomery, a No. 1 pick by Kansas City in 2008 who appeared in 30 games in relief prior to Sunday, retired the Royals in order in four of the first six innings, allowed one run on five hits, and didn’t walk a batter. The run was a homer by Brett Eibner in the seventh.

By that time, Seattle had an 8-1 lead, built on a two-RBI single by Kyle Seager, a bunt hit by Ketel Marte that plated Leonys Martin, a two-run homer by Robinson Cano and a three-run jolt by Adam Lind.

Lind’s homer scored Nelson Cruz (infield single) and Seager (single) and left the impression the Mariners were on their way to a rout. But it turned out they had just enough of a cushion to fend off the Royals, who scored three times off reliever David Rollins in the eighth (and had two runners aboard when the inning ended) and once off closer Steve Cishek in the ninth.

Montgomery, a 27-year-old lefty acquired by the Mariners March 31, 2015, from Tampa Bay in exchange for Erasmo Ramirez, tossed only 74 pitches, 51 for strikes, in running his record to 3-3, 2.06 . . . Edwin Diaz, who replaced Montgomery, struck out two  . . . Rollins issued a bases-loaded walk in the eighth, among the three runs he allowed, and Cishek gave a solo shot to Alex Gordon in the ninth.

“I didn’t know how long Montgomery was going to go, but he was really efficient and that helped him get deep into the game. I would anticipate him getting another chance at starting. His effort was way better than I was expecting. He had a good change, his fastball had life and he got lots of ground balls. That was the key. We definitely wanted to go into the break with a winning record.” — Mariners manager Scott Servais

In Everett Sunday with the Class A Aquasox, Felix Hernandez pitched 3.2 innings in his first rehab assignment since May 27, when he strained a calf muscle. He gave up six hits and three runs, throwing 59 pitches (39 strikes), striking out six and walking two. He said he felt good and would stick with the plan to start him July 20 . . . The Mariners went 2-5 on the seven-game trip, including 2-2 vs. Kansas City . . . Seattle is 14-10-3 in overall series, 7-5-3 on the road . . . The Mariners gained no ground on Houston Sunday as the Astros (48-41) knocked off Oakland 2-1 to remain three games ahead of Seattle for second place in the AL West . . . Four teams — Houston, Detroit, Kansas City and Chicago — are ahead of Seattle for the AL’s second wild card spot . . . The only other year since 2010 that Seattle reached the break with a winning record was 2014 (51-44) . . . The Mariners are 4-17 in road games since June 3 . . . . 1B/DH Dae-Ho Lee did not play Sunday due to a contusion on his hand. He is expected to resume playing after the All-Star break.

After the four-day break, the Mariners resume play Friday at Safeco Field with the first of three against the Astros. That will kick off a six-day, six-game home stand that will also feature a visit by the Chicago White Sox.