This is how great Ken Griffey Jr. might have been

Ken Griffey Jr.’s record 99.32 percent of the Hall of Fame vote testifies to his greatness. Here’s what he might have done if he stayed healthy in his prime. 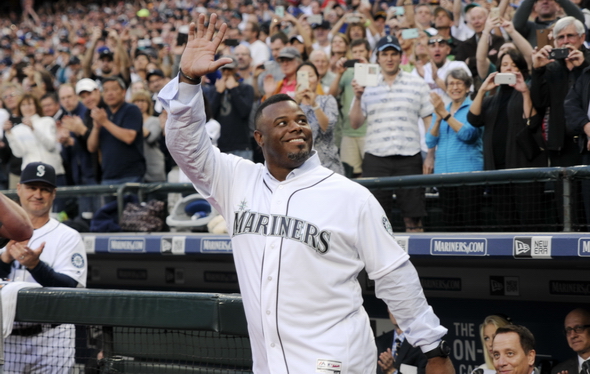 When Ken Griffey Jr. won election to the Baseball Hall of Fame in January with 99.32 percent of the vote (named on 437 of 440 ballots), two topics dominated the ensuing discussion: The identity of the three schmos who bewilderingly failed to vote for Griffey, and the question of what his career would have looked like had he not lost so many games to injury.

The Baseball Writers Association of America refused to “out” the writers who whiffed, so it’s unlikely they will receive a well-deserved Twitter flogging. As to the look of Griffey’s career had his body held up, behold the math.

By the end of the 2000 season, the 31-year-old Griffey had spent 10 years with the Mariners, one with the Cincinnati Reds. At mid-prime, he had 438 home runs, won 10 Gold Gloves, seven Silver Sluggers and an MVP award (1997, unanimous), while finishing in the top five in MVP voting four other times.

Griffey also led the American League in home runs four times and made the All-Star team 11 consecutive years, winning a record eight elections as a starting center fielder. When Griffey was named to the MLB’s All-Century Team in 1999, he aced the eye test as a future first-ballot Hall of Famer.

By the end of Griffey’s age-31 season (2000) he played in 1,680 games, missing only one significant stretch, 73 contests, from May 26 to Aug. 15 in 1995, due to a hand broken while making his famous Spiderman catch against the right-center wall in the Kingdome.

Since the end of World War II, 11 outfielders, primarily home run hitters of Griffey’s ilk, have been enshrined in Cooperstown with at least 88 percent of the vote.  This is what their careers looked like vs. Griffey’s, all at the 1,680-game mark (ranked by home runs):

As Griffey entered his second season with the Reds in 2002, Baseball Prospectus predicted that he was a lock to become the third man, following Hank Aaron and Babe Ruth, to hit 700 home runs, and that he would likely snare two or three more MVP awards. Sounded reasonable, if not a given.

Then things went awry. Griffey suffered a torn labrum, a dislocated patella, a torn hamstring and a second broken hand. Instead of averaging 150 games as he did during his first 11 seasons, Griffey averaged 92 games and 324 at-bats over the next six, practically wrecking the remaining of his prime years (ages 31-36).

Looked at another way, after turning 31 Griffey made the All-Star team only twice in his final 10 seasons. He never won another Gold Glove or a Silver Slugger, never led a league in any notable hitting category, and made only one appearance on an MVP ballot, a 24th-place finish in 2005.

During the five seasons prior to his injuries, Griffey averaged 49.8 home runs per season. Over the next six, when he lost 346 games to injury, he averaged 19. That probably cost him between 100-115 home runs.

At the time of Griffey’s retirement in 2010, ESPN’s Jason Stark  devised a formula that calculated that a fully healthy Griffey likely would have hit 147 more home runs, placing his career total at 777. David Vincent, who compiled The Home Run Encyclopedia, wasn’t as generous as Stark, placing Griffey’s lost home runs between 100-125.

One more bit of math: Griffey averaged one home run every 17.9 plate appearances during his 22-year career. Since he missed an estimated 2,570 plate appearances, that’s a loss of roughly 143 home runs.

Even if you subscribe to Vincent’s low-end total of 100 missed long balls, adding that to Griffey’s final total of 630 places him at 730. Barry Bonds needed exotic pharmaceuticals to post the all-time record of 762.

All of that doesn’t take into account how many more All-Star games, MVP awards, Gold Gloves and Silver Sluggers Griffey might have added had he been fully mobile during his  31-36 age years.

Given that he earned 99.32 percent of the Hall of Fame vote, an all-time record, it’s not surprising that Griffey shows up on practically every list of the all-time greatest outfielders. There is no way to statistically compare Griffey’s career to that of, say, Ty Cobb, who played in the dead ball era, and was an entirely different kind of player.

The following are outfielders who received at least 88 percent of the Hall of Fame vote, minus Griffey (99.32), listed according to highest percentage.