In the season’s first half, the Mariners offered despair and delight, but no clear path ahead. Here’s some cogitation on what wlll and won’t happen in the second half. 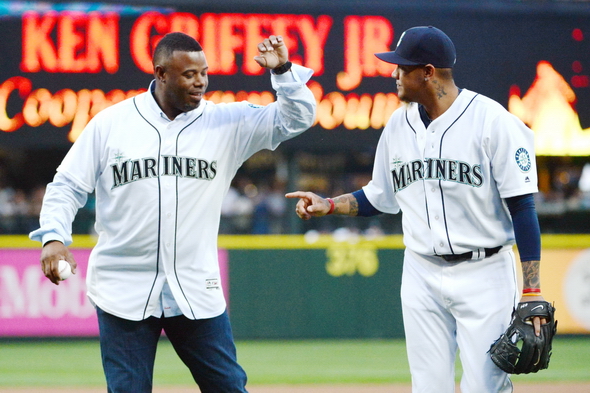 The Kid and the King meet. But will the King be the King again? / Alan Chitlik, Sportspress Northwest

Beginning the second half of the season at 45-44, the Mariners are the perambulating paradigm of Steven Sondheim’s memorable “Comedy Tonight”  lyric:

A team doesn’t get to be 28-18 by being bad. But going 17-26 thereafter is a strong argument that regains a seat at the discussion about badness.

From the start of Jerry Dipoto’s tenure as general manager, he churned through the coaching staff and many veterans and prospects, several of whom were acquired and dealt before playing a game in Seattle. The frenzy was  inspired by the unstated but unequivocal task of putting together a playoff-competitive team from the fourth-place, 76-win outfit he inherited.

Apparently, the burden of being the team longest absent from the playoffs hung heavily.

It was weighty enough that Dipoto tried to allay skeptical fans by forecasting a win-total finish in the mid-80s, where the second wild-card spot lingers like the final bruised banana in the bunch.

The Mariners began with MLB’s oldest 25-man roster, a fraction over 30 years in average age. They started well under a rookie manager, Scott Servais, but for reasons opposite the plan discussed by Dipoto: They hit many homers and misplayed many balls, when the notion of the new regime had been to play good defense and manufacture runs.

For a time in the past week the Mariners had the worst fielding percentage in the game, and at .982 at the break, are two points from the worst. That doesn’t count LHP James Paxton’s fear of throwing to second base on a comebacker that cost a game in Kansas City.

But the Mariners made up for a lot of shortfall with 132 homers, second in MLB, which also cuts down the chances for another Mariners weakness, TOOTBLAN. It’s hard to make a baserunning mistake on a home run trot.

Complicating the Mariners’ aspiration is that the American League has 10 teams playing better than .500. Seattle is 10th, or four  teams back of the second wild card. The margins are surmountable, and this is a veteran team, but  . . . it’s still the Mariners, with layers of skepticism baked into the franchise’s tradition.

FanGraphs.com gives the Mariners a 15.1 percent chance of making the postseason.

The Mariners will add a solid veteran starting pitcher as the trade deadline nears. Injuries, the fades of Wade Miley and Nathan Karns and Paxton’s erratic nature — will he ever make an overhand throw to a base again? — make this essential.

My long-term candidate is Tampa RHP Jake Odorizzi. The Rays are in last place and Odorizzi is 26, cheap ($520,700) with three years of arbitration eligibility left. He has a 4.33 ERA, 8.49 K/9, 2.98 BB/9 in 100 innings. The price in talent will be steep, but new owner John Stanton is likely to be issuing permission slips this time around, and urgently wants the playoffs.

The 3-4-5 lineup spots will continue at its apex.  In OPS, Robinson Cruz, Nelson Cano and Kyle Seager all are above .900, one of baseball’s best engine rooms. Fatigue and injuries are always a threat, but these guys are collectively earning $46 million this season to play hard and long. Younger players get tired and sore too.

This is the best Mariners middle since the Griffey/Martinez/Buhner bombers of the Nineties.

Edwin Diaz will succeed Steve Cishek as closer. Seems like a stretch for a rookie in his first season out of the pen. But hey, he’s 22, not 19, and throws 100 mph with command — 34 strikeouts and six walks in 17.2 IP. Sure, he’s given up three homers, but he doesn’t flinch, has the closer’ swagger and will get better. Cishek won’t.

Felix Hernandez won’t be The King. Seven weeks lost to a calf strain injury will set back the staff ace sufficiently that the rest won’t overcome the rust. Even before the injury, Hernandez was showing the collective strain of 12 big-league years and more than 2,300 innings. Too many random bad innings with a loss of command will not provide the expected boost for a team that plays the most one-run games n MLB.

Lack of depth. We all know about the inevitability of injuries, but numerous other teams ahead of the Mariners, notably the division-leading Rangers, have solutions within the org. If LF Nori Aoki comes back from AAA Tacoma, that’s a bad sign.

Dipoto has a long-term plan that develops young hitters with his “control the zone” principle that is showing progress. But aside from the return of C Mike Zunino with a repaired approach, that proof is down the road.

AL competition. Enough teams are in the 85-90 win range that the climb-over is too many rows of barbed wire.

Finally, an asterisk: All of the foregoing is subject to change, depending on what happens when two hyper-aggressive, sabermetric seamheads, Dipoto and Stanton, get together at their first trade-deadline dance.

I’ll check the box next to: Something appealing.