Clippers owner and onetime partner of Chris Hansen, Steve Ballmer told a sports-tech conference that Seattle’s only hope for an NBA return was to go poaching for an NBA team with a short lease. 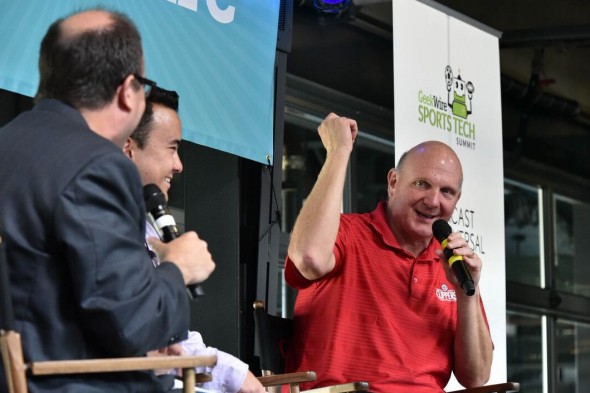 Rarely a speaker known for subtlety from his days at Microsoft, Steve Ballmer laid it out Wednesday for those at the Geekwire Sports Tech Summit who pine for the return of the Sonics: Expansion isn’t on the NBA agenda, so be prepared to poach a team from another market — should there ever be an arena in Seattle.

“(Expansion) is just not likely to happen,” the Los Angeles Clippers owner said during an interview with Geekwire’s Todd Bishop and Taylor Soper at the gathering of more than 300 attendees at a Safeco Field concourse. “There has been no discussion about expansion since I have been involved with the league. So, I don’t think that will happen. The league has really moved to favor teams staying in their current markets.

“And you’d have to show that an arena can get built in Seattle. Because unlike most other cities that build an arena before they have a team, I don’t think an arena is going to get built here before a team comes here unless it gets done in the context of hockey.”

Even though Ballmer’s thoughts may not be breaking news, his explainer had deeper resonance because it came from a) a Seattle resident; b) an NBA owner, not the politically correct commissioner, Adam Silver, and c) the one partner who gave Chris Hansen’s stymied Sodo arena plan the most credibility.

Ballmer all but said directly that the vacant Seattle market is a tool the NBA uses to extort public funds from other municipalities.

Never is it done in pro team sports to speak about the cudgel of monopoly power wielded by the leagues. But in the eight years since the Sonics decamped to Oklahoma City, Seattle’s void has been used by the NBA three times — in Sacramento, Milwaukee and Minneapolis — to help secure some public funding for new arenas, so the truth speaks for itself.

As Microsoft’s CEO, ruthless business dealings were the order of the day.

The Sacramento episode in 2013 is notorious in Seattle because Hansen and Ballmer teamed up to offer $625 million to the owners of the Kings in order to move the team, playing in a modestly updated KeyArena until a new building was ready.

But new local ownership was found to nearly match the offer, and NBA owners voted 22-8 to keep the Kings in Sacramento. The Golden 1 Center, billed as the world’s most technologically advanced arena, opens this fall.

The Kings bid turned worse when Hansen was fined by the California elections commission for not declaring funds given to an anti-arena group prior to a public vote on the arena. Then Ballmer, impatient with the slow process in Seattle, bolted his partnership with Hansen when he saw a chance to buy the Clippers from Donald Sterling, who was suspended from the league after recordings of racist comments he made were released publicly.

Seattle’s richest Basketball Jones paid $2 billion, about three times the estimated value, and rocked the global sports market. For Ballmer, it was a no-brainer to bail on the Seattle project.

“In my own case, I’m 60 years old and I wasn’t prepared to wait five or 10 years,” he said, then disabused again the rumor that surfaced around the time of the purchase about a move to Seattle.

“The Clippers are not going anywhere — ever,” he said. “I will die owning the LA Clippers.”

Regarding another NBA matter, the pursuit this summer of free agent superstar Kevin Durant, whose rookie season was in Seattle, didn’t work for the Clippers, even though Durant was said to be “blown away” by the presentation.

Asked what he was doing in the room, Ballmer said in his legendary outside voice, “Working hard! Selling our butts off!

“I believe wholeheartedly that we were a great destination for Kevin Durant. We wanted to bring alive to him the possibilities. He loves tech. We wanted to show him what it would be like to be THE player associated with the advance of technology in sports.

“The most important thing we talked about? Who he’s going to play with. We showed him what it looked like, how it would build his brand, his legacy. What he will get from his teammates and coach. The analytics told us that (Clippers star) Blake Griffin makes more passes per game than (Golden State’s) Steph Curry or (Oklahoma City’s) Russell Westbrook — in case maybe Kevin wanted someone to pass him the ball.”

As you may have read, Durant politely declined, choosing Curry and the Warriors — a rare moment in Ballmer’s life where he didn’t get what he wanted.

The episode also served as a reminder of one the great ironies in this sports marketplace — that Durant, perhaps with Ken Griffey Jr. the most valued draft picks in Seattle sports history, and two of the city’s billionaire sports titans, Ballmer and Portland Trail Blazers owner Paul Allen, do not operate in Seattle.

It’s clear how it all happened, but add them together and one gets a big basketball-shaped zero. It should be illuminated every night, Bat-signal style, over Starbucks world headquarters on First Avenue South.