Clint Dempsey made another aggressive error, earning a red card for his trouble, but Seattle stretched out a beleaguered FC Dallas to record its first three-plus goal game of the season. 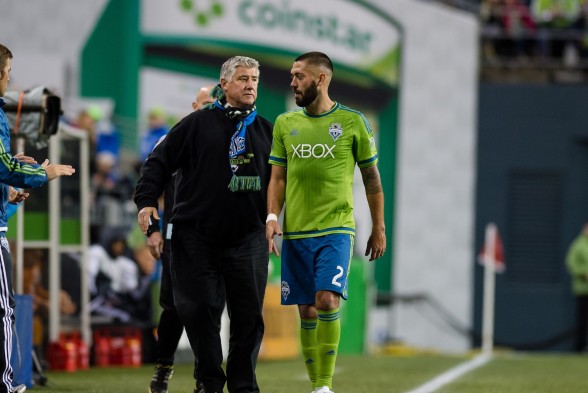 Clint Dempsey got his marching orders early Wednesday for putting his hands to the face of Juan Ortiz. / Jane Gershovich, Seattle Sounders FC

Clint Dempsey managed soccer’s version of a Gordie Howe hat trick in just over a half hour’s work at CenturyLink Field Wednesday evening. Seattle’s highest-paid player notched a goal and an assist before receiving a red card for raking his hand across the face of Juan Esteban Ortiz as Seattle defeated Dallas 5-0.

Sigi Schmid backed his player after the game, saying that Dempsey was routinely targeted by hard tackles.

“He competes, but he’s also oftentimes a target,” Schmid said. “We saw that as well in the Champions League. I think the protection from the referees has to be there as well.”

The red card was the first of Dempsey’s MLS career, but not his first during his time in Seattle. Last year, Dempsey served a three-game suspension for blowing his lid and tearing up the referee’s notebook in an Open Cup loss to the Portland Timbers. Dempsey also served a two-game suspension in 2014 for swatting Toronto defender Mark Bloom in the groin, though Dempsey maintains the contact was accidental.

Dempsey has always been a hard-nosed player willing to stick up for himself, but one would think discretion might be on the list desired traits for a player earning a base salary of $4.6 million a year.

His prowess on the field makes him a target of rough tackles, and referees don’t always call as many fouls as he would like, but Dempsey’s cowboy cop antics do more harm than good to a team hoping to turn Wednesday’s victory into a foothold to climb into playoff contention.

Already leading by three goals in the 33rd minute, Dempsey was shoulder-checked by Ortiz as he got rid of the ball. Dempsey’s arms swung toward Ortiz, his right arm raking the face of Ortiz before his left came down in a slap on the back of Ortiz’s head. The Colombian midfielder went down, clutching his face. After conversing with the fourth official, referee Ricardo Salazar showed Dempsey red, before giving Ortiz a yellow.

Salazar explained his decision after the match.

“The foul was on Mr. Ortiz of Dallas, and then Clint put his hands to the opponent’s face,” Salazar said. “That’s considered violent conduct and we had no choice but to him the red card.

“The yellow card was for persistent fouling on Ortiz. That was, I believe, his fourth foul.”

The yellow card means that Dempsey playing the literal long arm of the law was especially unnecessary — Salazar intended to award him a free kick for Ortiz’s challenge.

Dempsey’s street justice earned him an early shower, but his absence made the match 10 on 10 thanks to the earlier red card. Dallas manager Oscar Pareja fielded a backup-heavy squad, trying to rest the legs of his players with both Open Cup quarterfinals and the CONCACAF Champions League looming.

Seattle pressed the mismatch, earning an early advantage when Andreas Ivanschitz broke into the box and loosed a shot on goal in the fifth minute. The ball was blocked by the outstretched arm of defender Maynor Figueroa, causing Salazar to issue him a red card for denying an obvious goal-scoring opportunity.

Dempsey blasted the spot kick to the high right side of the net as keeper Chris Seitz went the other way to give the hosts the lead. The goal was Seattle’s first at home in MLS play since a 2-0 win over San Jose May 7.

Ivanschitz added a second goal in the 18th minute, running on to a bouncing ball from Osvaldo Alonso before chipping Seitz to double the lead.

Jordan Morris scored his seventh goal of the year in the 22nd minute, when Dempsey slide a ball by the backline as Morris jumped into space. Morris took a touch, before shooting the ball back across the goal mouth into the left side net.

Joevin Jones added a goal in the 62nd minute, when a long-range shot took a deflection and rolled into the net. Cristian Roldan put the icing on the cake in the 73rd, heading home a free kick from Ivanschitz to record his first career MLS goal.

The red card means that Dempsey will miss Seattle’s grudge match against the Portland Timbers Sunday, the first time the teams have met in league play since the Timbers won the MLS Cup.

Schmid said that despite Dempsey’s ejection, he thought his team would be ready to take on the reigning champs.

“I think we’re as well positioned as we can be,” Schmid said. “We’d prefer to have Clint, he thrives on big games. Overall, I think we came out of the game well.”

The dismantling of the team atop the Western Conference should have been Seattle’s triumphant unburdening; the slump-busting party that propelled the team out of the funk that has plagued it for months. Dempsey getting grounded did not cancel shindig, but the candles melted into the frosting.