Takeaway The Mariners came out of the All-Star break much the same way they went into it, losing to the Houston Astros, this time 7-3 Friday night at Safeco Field (box).  To beat the Mariners for the fifth consecutive time, including … 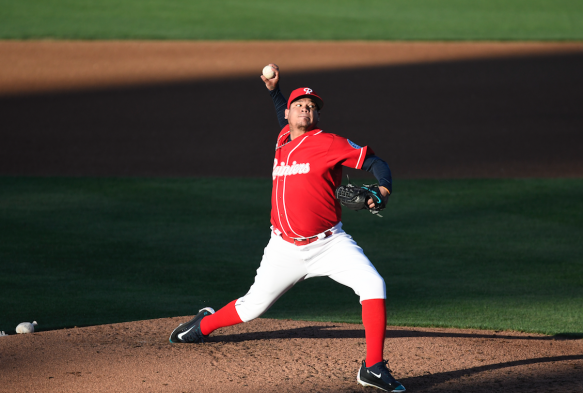 Looking good in red, Felix Hernandez had his final rehab start in Tacoma Friday, throwing 75 pitches over 5.2 innings and allowing one run on five hits with seven strikeouts and a walk. He plans to start Wednesday at Safeco Field. / Alan Chitlik, Sportspress Northwest

The Mariners came out of the All-Star break much the same way they went into it, losing to the Houston Astros, this time 7-3 Friday night at Safeco Field (box).  To beat the Mariners for the fifth consecutive time, including a sweep in Houston before the break, the Astros used a five-run fifth inning when Seattle starter James Paxton ran into trouble. The Mariners  (45-45) fell short for the sixth time in eight games.

Having already allowed a run to score on a wild pitch earlier in the fifth, Paxton threw a pitch that was so short of home plate that it bounced way past C Chris Iannetta and allowed baserunner Carlos Correa to score from second base. The lowlight helped Houston to a 6-0 lead.

Paxton turned in another head-scratcher, throwing three wild pitches among his 77 pitches. He allowed six runs off nine hits over five innings. Relievers Vidal Nuno, Tom Wilhelmsen and Nathan Karns were solid, although Wilhelmsen did serve up a solo homer.

Former Mariner Doug Fister shut out his old team through four innings before giving up three runs in the fifth. He surrendered five hits and two walks.

1B Dae-Ho Lee and 3B Kyle Seager both had two hits, while SS Shawn O’Malley added a two-run double. Seattle had eight hits but 2B Robinson Cano and RF Nelson Cruz combined to go 0-for-8. The good news was Cruz was able to finish the game after fouling a ball off his left foot in his first at-bat.

“The wild pitches there didn’t help. I’ve got to get that fixed.” – Paxton

After his solid rehab start in Tacoma Friday, Felix Hernandez figures to return to the big-league mound Wednesday against the Chicago White Sox in an afternoon game at Safeco Field . . . SS Ketel Marte left the game with a sprained ankle between the third and fourth innings. Marte was hurt on a slide trying to turn a double into a triple in the third. He warmed up between innings but had to come out, replaced by O’Malley . . . LHP Mike Montgomery was named as Sunday’s starter, with fellow southpaws Wade LeBlanc (Monday) and Wade Miley (Tuesday) scheduled for the White Sox series . . . Lee, who sat out the final game before the All-Star break due to a bruised hand, was back in the lineup Friday.

The Mariners play a rare Saturday afternoon game, with RHP Hisashi Iwakuma (9-6, 4.25 ERA) scheduled to start against Houston RHP Lance McCullers (3-3, 3.79 ERA). Based on recent history, the Astros have a big advantage: Iwakuma is 0-4 with a 7.50 ERA over his past five starts against Houston, while McCullers is 2-0 with a 2.08 ERA in his past two starts against the Mariners.