Ten years ago, Howard Schultz sold the Sonics to Clay Bennett of Oklahoma City. An NBA return seems no closer. Chris Hansen’s only play may to help build a bridge to get to the NHL. Howard Schultz on the day he bought the Sonics from Barry Ackerley on Jan. 11, 2001. / Dan Levine, Getty Images 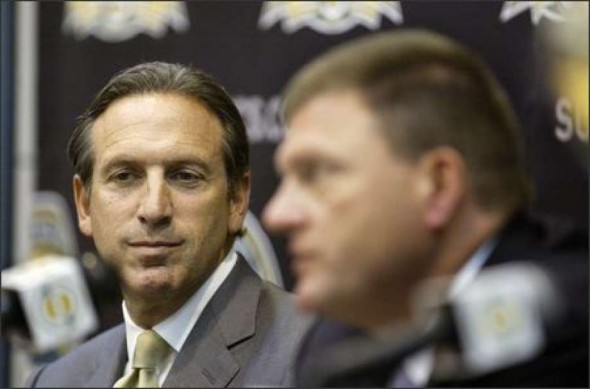 The 10th anniversary Monday of the sale by Howard Schultz of the SuperSonics to Clay Bennett, who two years later moved the club to Oklahoma City, is one of those moments everyone in Seattle wants to wipe from their shoes. But to dismiss an understanding of the events before and after July 18, 2006, would be a mistake, because the episode informs what may come regarding the return of the NBA.

Recent news regarding financial progress toward building the Lander Street Bridge, a 20-year pursuit of the Port of Seattle for improving freight mobility, opens up the theoretical possibility of an improved climate for a revised submission of Chris Hansen’s Sodo arena proposal to the Seattle City Council.

The theory is that with $100 million in pledged commitments for the $140 million project, Hansen could be the stakeholder who closes the gap. For certain, if the arena project were granted the vacation of Occidental Avenue, Hansen would pay a market price of around $18 million to $20 million for the land, a fee earmarked by agreement for the Sodo Transportation Infrastructure Fund.

That fund, which requires $40 million, was mandated in the 2012 memorandum of understanding between Hansen and the city. If Hansen and others with vital interests in the Lander bridge contribute another $20 million, the project is funded. According to the Seattle Department of Transportation, work could begin in spring 2018.

Again, in theory, investing in a bridge to a solution might inspire the port to drop its Sodo arena objections.

However, followers of this twisty saga know that the MOU expires in November 2017. That would mean Hansen and his private money dedicated to a public works project vanishes. Logic would dictate that as a condition of helping supply the decisive cash for Lander, Hansen would insist upon extending the MOU. He probably would seek five years.

The City Council, which May 2 voted 5-4 to reject the bid for the Occidental vacation, would have to decide to reconsider in light of rare private money for a project that would also improve public safety. If the council agrees to consider a vote on a revised proposal, it then must decide how much leash to grant Hansen’s seemingly fruitless pursuit of an NBA team.

Which gets us back to 2006. Or more precisely, Feb. 26, 2004. That’s when things went seriously haywire between Seattle and the NBA.

At the behest of Schultz, NBA Commissioner David Stern flew to Seattle and was driven to Olympia to make the case before the Legislature for state support of a $220 million proposal to upgrade KeyArena — even though the building was upgraded in 1995 for $100 million in a deal funded by the city.

In short, Stern and his league were told to drop dead by Frank Chopp, Speaker of the House from Seattle’s 43rd District, then and now.

To paraphrase the animated parliamentarian Foghorn Leghorn, that was the most unheard of thing Stern had ever heard of. In a Sportspress NW story from May 2013,  colleague Steve Rudman recounts Stern’s attitude.

“Stern felt like Chopp treated him and the NBA with disrespect,” one of the members in the Seattle entourage that day told me. “Stern was upset that he went all the way to Olympia only to get abused. We tried to tell David that Chopp treats everybody asking for money that way, but David took it personally, and he didn’t like it at all.”

By 2006, Stern, never one to forgive a slight, saw an opportunity for payback after the Schultz ownership group quietly put up the Sonics for sale. Bennett, a minority owner in the San Antonio Spurs, had done the NBA a big favor by hosting temporarily in his hometown Oklahoma City the New Orleans Hornets, orphaned by the 2005 ravages of Hurricane Katrina. Stern was disposed to look kindly upon Bennett’s ambitions in Seattle.

When Bennett bid a then-astonishing $350 million for the Sonics, which Schultz bought five years earlier from Barry Ackerley for $200 million, Stern was delighted to test his adversaries in Washington state.

Three days after Bennett bought the Sonics, opponents of further public funding of sports venues, organized as Citizens for More Important Things and led by attorney Chris Van Dyk,  presented nearly 24,000 signatures for placing Initiative 91 on a citywide ballot. The proposal mandated for pro teams renting city venues such as the Key that the leases must include a small annual profit for the city, using a formula tied to the return on U.S. Treasury bills.

Despite its confusing wording, the measure made the city ballot in November 2007, and won by a stunning  74.1 percent plurality. A few days later at a press conference in Phoenix, Stern was asked about the Sonics’ increasingly perilous situation. He made it clear he received the voters’ message.

“That merely means,” said Stern caustically, “that there is no way city money would ever be used on an arena project.

“If the team moves, there’s not going to be another team there, not in any conceivable future plan that I could envision. There’s no way the league would ever return to the city.”

Nine months later, Seattle mayor Greg Nickels decided, in exchange for $45 million from Bennett, to stop the city’s lawsuit that demanded the Sonics stay through the 2010 end of the lease.

The Sonics were gone. And Stern so far has been correct on his threat.

The city law produced by Initiative 91 remains on the books and is unique in the American sports marketplace. To NBA bosses, the law reflects a clear Seattle voter disdain for  practices common (e.g., sweetheart leases) in other markets.

Hansen’s claim in his business plan that seeks up to $200 million in construction loans for the proposed arena says it satisfies the law’s requirements. Opponents disagree.

What is known is Stern is retired, and his successor, Adam Silver, hasn’t necessarily inherited Stern’s petty vindictiveness toward Seattle. But Silver also said multiple times there’s no reason or plan for the NBA to expand in the foreseeable. One of his bosses, Clippers owner and former Microsoft boss Steve Ballmer, confirmed it at a conference in Seattle last week.

“(Expansion) is just not likely to happen,” said Ballmer, a former partner in Hansen’s arena bid before buying the Clippers in 2014 for $2 billion. “There has been no discussion about expansion since I have been involved with the league. So, I don’t think that will happen. The league has really moved to favor teams staying in their current markets.

So the 10-year anniversary of the Sonics sale brings us to future events. Given its clear aversion to a) expansion, b) relocation and c) the voters and electeds of Seattle, the NBA for Hansen seems at the moment a beyond-Steph-Curry-range long shot.

Which doesn’t mean allowing him the opportunity is a bad idea. Because if he’s going to go to the trouble of re-submitting a proposal for Sodo that helps pay for the Lander Street Bridge and includes a deadline extension, the rewrite of the MOU should also include the NHL, for which expansion/relocation are not at all far-fetched.

To build for NHL first, Hansen made it clear he needs a partner group emotionally invested in hockey and financially capable of investing in his arena plan. As far as is known, no such entity has reached out, at least in part because Hansen has no NHL deal with Seattle.

If Hansen can help the city build one bridge, the city should be open to him building another bridge to a sport that would embrace Seattle, not exploit it.