For us Puget Sound-area lifers, it’s sometimes surprising to hear that newer arrivals wonder about the reverence in which Ken Griffey Jr. is held around here. His baseball feats speak well for themselves, but when adults begin to mist up … 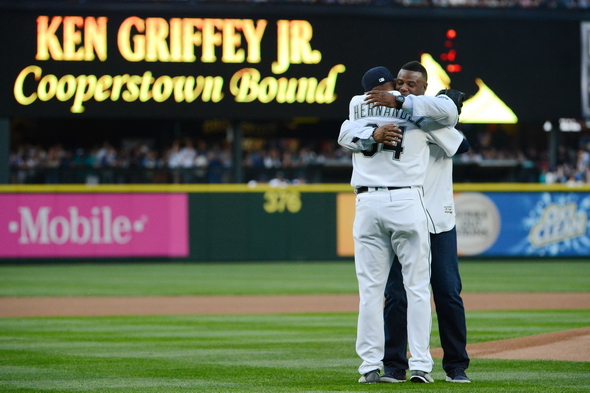 For us Puget Sound-area lifers, it’s sometimes surprising to hear that newer arrivals wonder about the reverence in which Ken Griffey Jr. is held around here. His baseball feats speak well for themselves, but when adults begin to mist up 30 seconds into their storytellings, it may provoke newbie listeners to take a half-step back.

You hadda be here. Almost a generation has passed since his pinnacle deeds of the mid-1990s. With the marketplace seeming to add 10,000 newcomers a day, Griffey’s decade in Seattle drifts incrementally yet inevitably toward the shelf and away from the civic heart.

His induction to the Hall of Fame Sunday in Cooperstown, NY., is a compelling reason to recall that the baseball world for much of the 20th century was convinced that Seattle was a bad baseball town. The fact it was actually a town of bad baseball didn’t occur to anyone who didn’t have to watch it daily.

Griffey changed all of that, not only by his deeds but by his exuberance for the game. Then there was that moment in 1990 when Griffeys Senior and Junior took the Kingdome field together. Any witness who was a father or a son still can’t get that out of his throat.

Never has Seattle sports experienced a more transcendent athlete, because he was the prime reason a crippled franchise on the edge of relocation is now anchored in the cultural firmament, 15 playoff-free seasons notwithstanding.

Between the lines, Griffey was the paradigm of ballplaying perfection. Outside the lines, he had a complex web of insecurities that dismayed some and irked others because, as with most of us, he had a hard time explaining himself.

Griffey was the community’s child, in all his glories and aggravations. Arriving as a teenager and departing as a married man with children, he reveled in and recoiled at also carrying a franchise.

When he made the decision to leave in 1999, taking his family closer to his new Florida home as well as his divorcing parents — and to find a ballpark more hitter friendly than new Safeco Field, which he was partially responsible for creating — the development was the most wrenching in my experience in Seattle sports, at least until the Sonics left.

For my 2002 book Out of Left Field, which chronicled the Mariners’ rise from the baseball ditch to the freeway, I had access to those who were involved in the decision by Griffey to exercise the collective bargaining agreement’s “ten-and-five rights” (10 years in baseball, five with the current team) to demand and get a trade to a team on the list of his choice.

In early November 1999, Griffey told his agent, Brian Goldberg, who informed CEO Howard Lincoln and president Chuck Armstrong of the decision. The Mariners’ execs wanted to hear it directly. Along with GM Pat Gillick, they flew to Florida.

Below is an excerpt from the book that describes the episode.

The club execs planned to talk with Griffey and Goldberg at an Orlando hotel meeting room. “Kenny didn’t want to come,” Goldberg said. “He said, ‘We’re friends, and a meeting makes things too formal.’ I think they knew what his decision was, but since things came out bad with Randy Johnson, they didn’t want a repeat.”

Griffey finally relented. He met Gillick for the first time, and the five men chatted briefly before Griffey explained the personal and family concerns that had become paramount.

Then came the crossroads moment: He said he no longer wanted to be a Mariner.

Gillick asked: “What if we go to the World Series?”

Armstrong, who was club president under former owner George Argyros in 1987, when the Mariners chose Griffey with the No. 1 pick in the amateur draft, asked to speak to Griffey privately. The two and Goldberg left the room and walked down the hall to the lobby for a few minutes. After 13 years of spectacle, injury, sadness and breathtaking joy, The Kid who became The Man in Seattle sports and the most popular baseball player on the planet, started to cry. So did Goldberg. So did Armstrong.

Griffey left the hotel. Goldberg and Armstrong composed themselves, returned to the meeting, and said Griffey was solid in his decision, so let’s move on.

After a discussion of some wording in a joint statement, the meeting quickly broke up. A call was made to the offices in Seattle. Bart Waldman, the attorney who worked on the contracts with Griffey, will never forget the despair in the office that afternoon.

“We were thunderstruck,” said Waldman. “This came out of the blue . . . he didn’t want to stay. It was a very tough day.”

Said assistant GM Lee Pelekoudas: “You didn’t take him for granted, but he’d been a part of the organization for so long, What we accomplished with and because of him . . . all of a sudden, you say, ‘Oh, shit.'”

After more than three months of tense, awkward and often public negotiations between the Mariners and the several clubs on his list, Griffey was traded to his hometown of Cincinnati Feb. 10, 2000. The Mariners obtained CF Mike Cameron and three guys who never amounted to much for one of the greatest players in history.

Griffey took quite a bit less money from the Reds than the Mariners’ final offer ($138 million million over eight years), and he took on even more pressure as the prodigal son returned.

Said Cincinnati radio personality Bill Cunningham: “For a thousand years, Cincinnati will shine as the brightest star. Griffey has lit a thermonuclear fuse, fallout from which will cover the town forever and ever.”

For reasons largely due to declining health, it didn’t work out too well for Griffey in Cincinnati.

But that isn’t what Sunday is about. It’s about Griffey’s first 11 uproarious years in Seattle, where he brought the sport from the margins to center stage.

The time when he was The Kid. As were we all who bore witness. 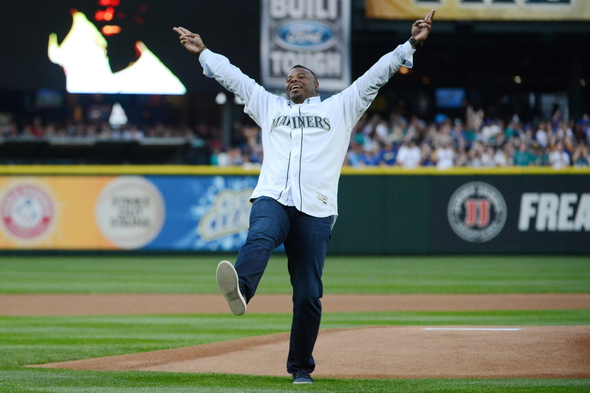