Another dreary night from the offense failed to help starter Wade Miley, and the Marriners lost to the Chicago White Sox Tuesday night. 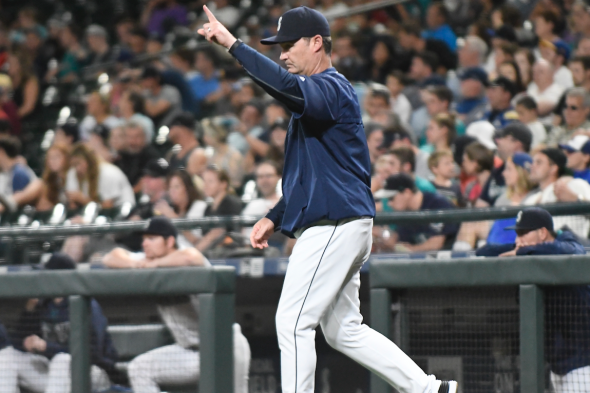 Adam Lind stepped up with two outs in the bottom of the ninth inning again and . . . needed to hit a five-run homer. So never mind. Thanks in part to a three-run top of the ninth by the White Sox, the Mariners stumbled to a 6-1 loss Tuesday at Safeco Field. Seattle’s anemic offense had six hits – five singles — and scored its only run on 2B Robinson Cano’s homer in the fourth. The Mariners (47-47) have not won back-to-back games since sweeping the Orioles in a three-game series to open July, while Chicago snapped a five-game skid.

Starter Wade Miley turned in a solid performance before giving up a leadoff homer in the seventh. Chicago’s Melky Cabrera broke a 1-1 tie with a 390-foot homer on a 3-2 count, then the White Sox added an insurance run off reliever Tom Wilhelmsen.

Miley got through 6.1 innings on a night when the Mariners were hoping to save their bullpen for Wednesday’s return of Felix Hernandez. Miley (6-7) allowed three runs off six hits but was tagged for a pair of solo homers, to Brett Lawrie and Cabrera. Wilhelmsen finished the seventh, then rookie Edwin Diaz ignited his 100-mile-per-hour fastball to strike out the side in the eighth.  Joaquin Benoit had the worst night, giving up a two-run homer to Todd Frazier in the ninth. Benoit was charged with three earned runs. His ERA swelled to 5.40. His time with the Mariners may be winding down.

Cano’s home run was his 22nd, the most he’s hit in a Mariners season. DH Nelson Cruz added three singles, but was stranded at first base (second inning), second base (fourth) and third base (sixth). LF Daniel Robertson had two singles.

“He made a mistake, and that’s what happens when you make a mistake to the guy
who’s leading the league in home runs.” – Mariners manager Scott Servais on the pitch from Benoit that Frazier hit for his 27th homer

SS Ketel Marte was out again. He’s missed two games in a row due to illness and three out of four, including the Saturday game he sat out with a sore ankle . . . SS Shawn O’Malley was in the leadoff spot for only the second time this season . . . With Hernandez set to come off the disabled list before Wednesday’s game, the Mariners will make a move to clear a roster spot. Reliever David Rollins and Robertson appear to be the most likely targets for demotion.

The King’s Court will have to de-rust for Hernandez’s first appearance since May 27. Hernandez (4-4, 2.86 ERA) goes at 12:40 p.m. Wednesday against Miguel Gonzalez (2-5, 4.40 ERA) in the series’ first matchup that didn’t feature opposing southpaws.