Roster moves, a trade, a big minor-league injury and, oh, by the way, Felix Hernandez returned. But the biggest news was another win with a walk-off homer by the highly entertaining Mariners. 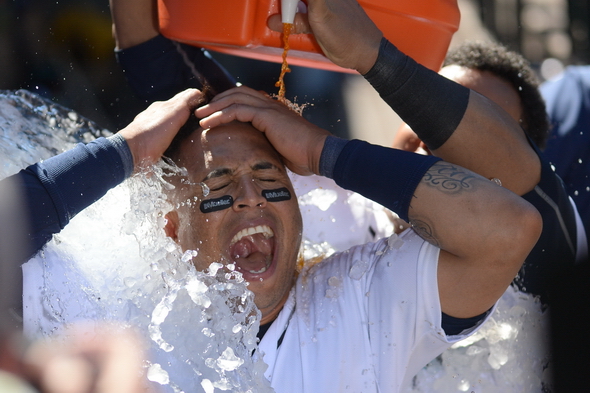 Arriving at Safeco Field for the Mariners’ Wednesday matinee against the Chicago White Sox, the obvious angle was the return of star pitcher Felix Hernandez after a seven-week injury absence. By the close of the afternoon, the storyline dropped faster than Melania Trump’s credibility.

The game itself was a slow build to a boffo climax, a 6-5 triumph in 11 innings after a walk-off homer by CF Leonys Martin in front of a howling crowd of 39,985 (box). Not only was it Martin’s second dinger of the game, it was the second Seattle walk-off in the three-game series that the Mariners won 2-1 despite never having led for a single inning.

Pre-game, the Mariners, besides Hernandez, brought up LF Nori Aoki and C Mike Zunino, sent starter Wade LeBlanc to the bullpen, and sent to AAA Tacoma reliever David Rollins, OF Daniel Robertson and C Jesus Sucre. Zunino responded most dramatically by starting and hitting hit the third home run in his three big-league games this season.

Mid-game, Twitter crackled with news of a trade: The Mariners sent Mike Montgomery, starter-turned-reliever-turned-starter booked to open Sunday’s game, whom general manager Jerry Dipoto called “the most versatile pitcher we have,” to the Chicago Cubs in a four-player trade for two Cubs prospects who will be assigned to the minors. But Dipoto post-game claimed the trade was not an indication of whether the Mariners are buying or selling prior to the Aug. 1 trade deadline.

Post-game came news that OF Kyle Lewis, the heralded No. 1 draft choice (11th overall) who had a .915 OPS in 30 games for Class A Everett, was lost for the season after tearing the ACL and meniscus in his right knee Tuesday during a slide into the catcher at home plate.

Whew. The typical-three ring circus was about two shy of what the Mariners put out Wednesday.

The Mariners even had better clowns. And we say that in a positive manner about Martin, who now has two walk-off winners this season among his 13 homers — fourth among American League centerfielders.

“The key to his game was Martin had energy all day in the dugout,”  Mariners manager Scott Servais said, “yelling, screaming, jumping around, yelling at the other team, the umpire — which he does every pitch. That’s what it takes in a constant grind. Hats off to him.”

But there’s more than passion. Servais said after the All-Star break he talked to every player about what he thought he had to improve upon. Martin said he wanted to cut down his strikeouts.

He had two yesterday — and two homers, including a two-run shot in the second after the Mariners were down 4-0 behind a shaky Hernandez.

“You can see” Martin is improving, Servais said. “He’s talking walks, not swinging as hard. Don’t try to kill it — hit it.”

As for Hernandez, the great irony was that once they got him out of the game, the Mariners pitching shut down the White Sox.

“I felt good — no problems at all,” said Hernandez. “I was commanding my fastball.”

But he wasn’t commanding the strike zone, at least according to umpire Andy Fletcher. After ball four was called on the game’s fourth batter, Justin Morneau, that TV replays showed was a strike at the knees, Hernandez walked off the mound and yelled at Fletcher.

The next batter was the major leagues’ home run leader, 3B Todd Frazier. He hit his 28th, and third in the series, for a 3-0 lead.  Hernandez owned up to being distracted by the dubious strike zone.

Fortunately for Mariners fans, the game outcome remade the moment into amusement. Which apparently is the calling card for this version of the 48-47 Mariners — America’s most entertaining middling team.

Adam Lind tied the game at five in the eighth with a solo home run. Over his last 23 games at Safeco, he’s hitting .342 with nine home runs and 24 RBIs . . . The sixth walk-off homer win of the season, an MLB high, ties the club record with almost half a season remaining. The Mariners have 10 walk-off wins and 20 come-from-behind wins. . . Ketel Marte, still sick, won’t travel until Wednesday. The hope is he’ll play in Toronto . . . Montgomery on the trade, which he learned about mid-game: “Honestly, I hadn’t thought about it. It kinda hit me by surprise. I’ve been traded twice before, but never during the season. I knew it was possible. I wasn’t shocked. I’m sad I won’t be here with these guys in this city. At the same time, I’m excited to go to a good team and contribute.”

The Mariners flew Wednesday and have Thursday off before three games in Toronto starting at 4 p.m. PT Friday. After another day off, they go interleague — two in Pittsburgh, followed by three with the Chicago Cubs.