In a trade for “now and the future,” according to manager Scott Servais, the Mariners Wednesday sent LHP Mike Montgomery and a minor leaguer to the Chicago Cubs. 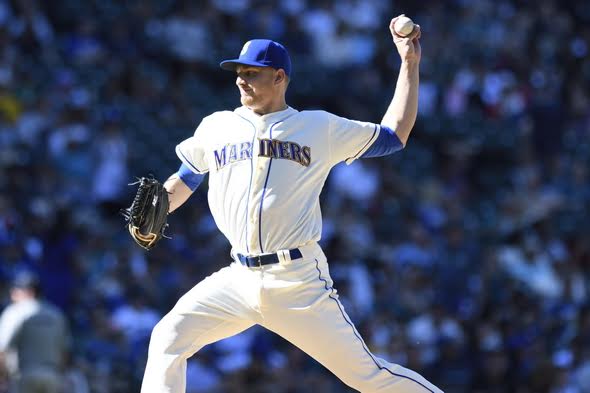 The Mariners Wednesday acquired minor leaguers 1B/DH Dan Vogelbach and RHP Paul Blackburn from the Chicago Cubs in exchange for LHP Mike Montgomery, a recent member of Seattle’s rotation, and minor league RHP Jordan Pries. The 24-year-old Vogelbach, a second-round pick by the Cubs in 2011, will report to AAA Tacoma, but could see Safeco Field soon.

“We will see him in Seattle this year,” said Seattle GM Jerry Dipoto. “He’s capable of stepping in now if we need it.”

‘The attraction (of the trade) was getting younger and deeper,” Mariners manager Scott Servais said after his club rallied from a 4-0 deficit Wednesday afternoon to beat the Chicago White Sox 6-5 on Leonys Martin’s second walk-off home run of the season. “The trade is for now and the future.”

Vogelbach was hitting hit .318 with 16 home runs and 64 RBIs with AAA Iowa this season. The 6-0, 250-pound left-handed first baseman was named to the AAA All-Star team and  leads the PCL in on-base percentage (.425), while also ranking second in walks and OPS (.972), Vogelbach has hit at least 15 home runs in each of his past four minor league seasons.

“Vogelbach can really hit, at every level,” Dipoto said. “He’s major league ready now. We envision him as part of the short and long term solutions. He’s got a little bit of personality to him. He plays with a certain uniqueness, which is fun.

“He’s worked hard to make himself a better defender. He’s a player we coveted in the off-season, and throughout the season.He’s had a great year. Whether that starts this week, this month, September of next season isto be determined.”

The Cubs selected Vogelbach out of Bishop Verot High School in Fort Myers, FL. Over six seasons in the minor leagues, he is batting .290 with 280 runs scored, 111 doubles, seven triples, 76 home runs and 323 RBIs in 500 career games. He was added to the Cubs’ 40-man roster Nov. 20. Vogelbach  ranked 20th among MLB Pipeline’s Top 30 Cubs prospects.

“I’m sad to see Dan go — he’s a great guy to be around but also happy for him to go to an American League club,” Cubs GM Theo Epstein told MLB.com. “This will be a chance to get at-bats at the big league level pretty soon. He’ll be around for a long time because he can hit and has great energy. Paul Blackburn has done a real nice job taking a step forward this year. He always throws strikes, always takes the ball and has numerous weapons to attack hitters with.”

Montgomery, 27, was 3-4 with a 2.34 ERA in 32 games, including two starts, with Seattle this season. Montgomery began the year in the bullpen, where he went 2-3 with a 2.15 ERA in 30 relief appearances. Montgomery was a first-round pick by the Kansas City Royals in 2008 and came to Seattle March 13, 2015 from Tampa Bay in a trade for RHP Erasmo Ramirez.

“He built up so much equity from opening day to today in the industry that his value was at a high,” Dipoto said. “He did a great job for us in the pen and as a starter. That fills a real niche. That allowed us to get a pretty good deal for us.”