Thiel: The Griffeys and dads, sons and baseball 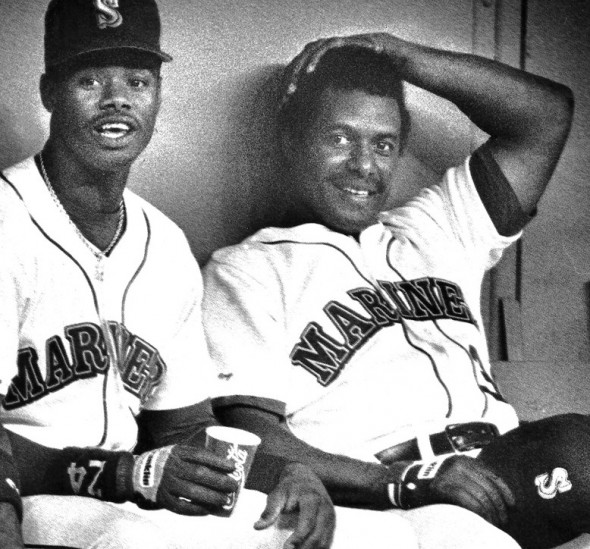 If Field of Dreams didn’t clearly explain the power therein, Sunday in Cooperstown, NY., wrote it plainly in salty streams down 100,000 cheeks. My guess is the tide ran high in homes who watched on MLB Network, too.

In their induction speeches at the Hall of Fame ceremony, Ken Griffey Jr. and Mike Piazza reached some touchstones that were more intense and intimate than any euphoria that followed their baseball deeds.

To this day, and likely forever, the moments that had Griffeys Senior and Junior in the Mariners outfield remain among the most incredible in sports history. If they had just stood there, it would have been enough to unleash the ducts.

But in September 1990, Senior, 40, and Junior, 20, hit back-to-back homers against the Angels in Anaheim, an episode so mathematically and generationally preposterous that the first flying hippo would take second place in the Absurdity Matrix.

Junior made only passing reference to it Sunday. Instead, as Senior, sitting in the audience of families, hung his head and wept, Junior spoke of a more important feat.

“He taught me how to play this game, but more importantly, he taught me how to be a man,” said Griffey, who failed hopelessly and delightfully his pre-speech prediction of coolness. “How to work hard, how to look at yourself in the mirror each day, and not worry about what other people are doing.

“Baseball didn’t come easy for him — a 29th-round draft pick who had to choose between football and baseball. Where he’s from in Donora, PA., baseball is the game. I was born five months after his senior year. He made a decision to play baseball to provide his family, because that’s what men do. I love you for that.”

As Griffey grew into a prodigy, there were long absences and some high tensions between a stubborn dad and an often-insecure son. None of that mattered Sunday as Griffey, teary but resolute, addressed a crowd of more than 50,000, said to have been the second-largest gathering in the history of the annual ritual.

“I got a chance to play with my dad,” he said. “I got to yell at him and tell him to get a hit. In baseball, people call each other fossil, graybeard, grandpa, dad, pops.

The Piazza tandem seemed even more overwhelmed, probably because their origins story is more unlikely. He is the lowest draft choice to make the Hall — 62nd round of the 1988 draft — and Vince Piazza was a relentless and sometimes controversial figure in his son’s career.

Claiming his father’s faith in his son’s abilities was greater than his own, Piazza said, “We made it, dad. The race is over. Now it’s time to smell the roses.”

Sentiment this day was not confined to the heaviness of parental bonds. Griffey told some tales, including one with his oldest son, Trey, now a senior wide receiver with the University of Arizona, but earlier in his youth a harsh television critic.

Father and son were watching TV when Trey picked up a bat and struck the set. Griffey’s wife, Melissa, was furious, even more so with her husband for not being upset too.

The three biggest cheers from the healthy Mariners contingent who made the cross-country trek were not surprising.

Griffey made a pitch for the baseball writers to get busy voting Edgar Martinez to join him: “Yes, he deserves to be in the Hall.”

He also saluted Jay Buhner as “the greatest teammate I ever had. A guy that gave everything on the field and always spoke the truth, even if you didn’t want to hear it. I love you for that.”

Martinez, playing hooky from his day job as Mariners hitting coach — they lost, 2-0, in Toronto — and Buhner were in the audience. He had something for the Seattle fans not in attendance.

“So many great things we could talk about. Out of my 22 years in the majors, I learned only one team will treat you the best, and that is your first team. I’m damn proud to be a Seattle Mariner.”

And then he reached under the podium for a baseball hat, put it on backward, and said thank you.

The deed and the words prompted riotous acclaim from the assembled.

Griffey now belongs to the baseball immortals. But they get his legend.

Senior and his ex-wife, Birdie, get the credit. And Seattle gets the glory of being the playground for one of the most glorious athletes in sports history.

Seattle is damn proud, too. 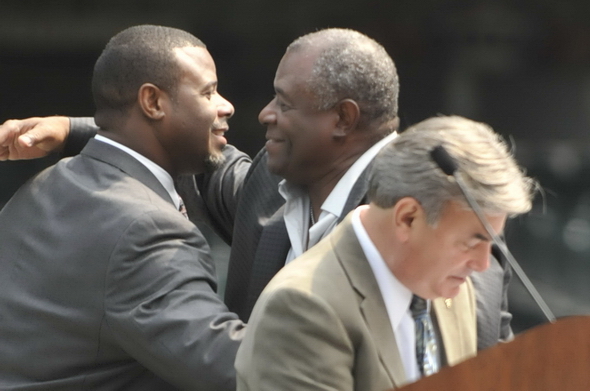 Father and sons Griffeys greet each other at a 2013 Safeco field luncheon emceed by Rick Rizzs. / Alan Chitlik