If the preseason departure of Obafemi Martins and the mid-season firing of Sigi Schmid signaled the end of an era for the Sounders, the arrival of Nicolas Lodiero may signal a new beginning. 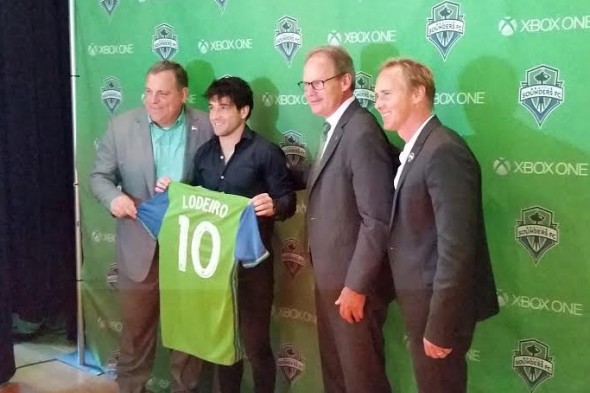 Speaking at a press conference Wednesday to introduce new designated player Nicolas Lodeiro, Seattle Sounders general manager Garth Lagerway described Lodeiro’s signing as a “new beginning” for the club. The club hopes his arrival is a shift away from relying too much on individual players to produce wins, as it did with Obafemi Martins, the man whose vacated DP slot Lodeiro now fills.

“Philosophically, this is a new beginning for us,” Lagerway said. “This is an opportunity for us to play with the ball on the ground, to be a possession-based team, to be a passing team, to be a creative attacking team. To say that the solution is not to sign another attacker, but to sign a midfielder who can change the game.

“I think it’s an exciting way to play, a way that our fans want to see. I also think that it is the way of the modern MLS. The league is increasingly technical, continues to add higher numbers of good players . . . It’s going to be a higher level of soccer, and we needed a higher level of player in the middle of our team to put us on level footing with the other teams.”

Lagerway’s comment is significant in that it acknowledges something over which the Sounders had long stuck their heads in the sand: The club had not appropriately adapted to the evolution of the league. Instead, the club has relied on big-money talent up front and inadequate depth. Both problems have been brought into stark relief the past two seasons by a dismal 1-9 summer stretch in 2015, and a league-worst 12 losses through 20 matches this year.

Seattle’s other great fault seemed to be tactical systems that failed to draw out the best performances from its players. Lagerway was correct when he asserted Tuesday that the club didn’t have “last-place talent,” but elements of the roster have shown lackluster motivation or struggled with the 4-3-3 formation, resulting in last-place execution.

The Lodeiro signing, adding a player who can assert more pressure in the midfield, may help the Sounders overcome the lopsided battles in the middle of the pitch where it has so often been overwhelmed this season. In particular, it may help take some of the pressure off Osvaldo Alonso, who has had one of his best seasons out of necessity to help shore up gaps in front of the back line.

Interim head coach Brian Schmetzer said that Lodeiro’s arrival would open new tactical options, in addition to the changes he was considering in the wake of Sigi Schmid’s dismissal, though he declined to go into details ahead of Sunday’s match against the LA Galaxy (12 p.m., ESPN).

One new player doesn’t represent a tactical renaissance from a roster perspective, but anyone who doesn’t think that one player’s presence (or absence) can’t alter a team’s course need only look at the departure of Martins.

In the case of Martins, it was because the club was too heavily built around one player. Seattle’s other players often found the net because Martins tied up so many defensive resources that they had easier looks toward goal. The system worked well, until Martins jumped at the chance for big money in the Chinese Super League.

To fill with Lodeiro, a player brought to elevate the entire team’s play, represents the new philosophical shift of the Sounders. The change will not be an instantaneous one. Growing pains are inevitable. However, with Schmetzer’s team-first mindset, Seattle’s new emphasis on youth development and decreasing the age of the roster, and new tactical options designed to draw the best out of its players, the arrival of Lodeiro may prove a pivotal role the in the transition of the Sounders.

It doesn’t necessarily signal that Seattle is regarding this season as a rebuilding year, but sitting in ninth place in the Western Conference just two losses shy of a single-season record, it was certainly time for a change. A team that hits rock bottom can either stay there or seek a new way forward.