Thiel: No hold-out; nor does Bennett hold back

Michael Bennett didn’t have his contract in mind when he showed up for work. He was wondering when his NFL brethren were going to be more concerned with social issues rather than endorsements. 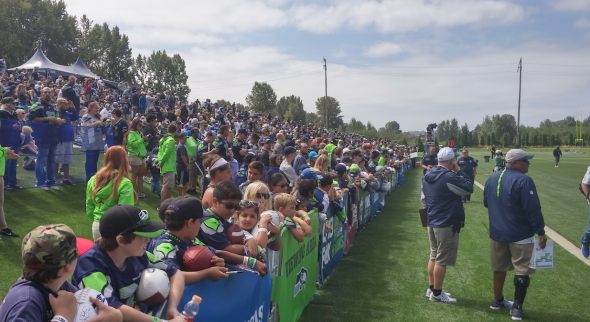 The masses were upon the berm at the Virginia Mason Athletic Center in Renton on the Seahawks’ first day of training camp. / Art Thiel, Sportspress Northwest

RENTON — No, DE Michael Bennett wasn’t going to hold out. Nor, in his first public chat at the Saturday opener of Seahawks training camp, was he going to hold back — on topics other than his compensation.

Despite his dissatisfaction with a contract he has out-performed, Bennett did as he said would do — show up and shut up. He would not pull a Kam Chancellor, who a year ago stunned the Seahawks with a fruitless holdout that went two games into the regular season and gained him nothing.

“Just want to show up and be a great teammate, no distractions for the team,” he said. “Just want to be a Seahawk for the rest of my life.”

Such a diplomat. Whether talks between his agent and the Seahawks produce an upgrade this season, against all previous club policy, Bennett is playing go-along, get-along.

Except when he comes to his social consciousness.

Wearing a Black Lives Matter T-shirt for his media appearance, Bennett waded into the national debate about police actions and the African-American community. But he took it up in large part because so few of his NFL brethren are willing to speak out and risk offending their corporate sponsors.

“It’s time for NFL players,” he said. “Most NFL players are black, but you don’t see a lot of great players talking about things socially. Peyton Manning, Aaron Rodgers, they’re white — they don’t have to deal with things we do as black players. The greatest players are in the forefront of movements. In the NFL, the greatest players aren’t in the forefront of movements, whether it’s (participating in the union’s collective bargaining agreement) or trying to change things as far as concussions.

“In the NBA, great players like LeBron James and Chris Paul are involved. Our great players are just staying back, taking the dollars, whether it’s Cam Newton or these guys who aren’t in the forefront of change.”

Bennett particularly lamented the absence of activism because of what it tells kids. He says he often asks kids why he’s a role model to them, and invariably they say because he’s a great player.

“I say, ‘That’s a terrible reason to have a role model,'” he said. “A role model is when you see true character. Lots of great athletes are good at their sports, but it’s what they do off they field, how they are with their wife and kids, their philanthropy. That’s what I consider (worthy of) a great role model.”

Clearly, Bennett is weary of athletes using their brands to peddle unhealthy products:

“When kids look up to me, they say, ‘That’s a guy pushing for everything.’ He doesn’t take dollars from McDonald’s, Pepsi or Coke. Nothing unhealthy for kids.

“Eventually we have to get together as a whole sports community. Athletes have brands. We control what is sold in America. We’re the conduits to shoes, clothes, drinks, whatever. Athletes hold a key to what people want. Athletes should control that influence and keep it positive. And make it sustainable, not so much about money.”

“That was super important,” he said. “Women are usually stronger with stuff like that. It takes men longer to step up.

“In the WNBA, there’s not as much marketing as the NFL. But if you want to be an influencer, you can’t worry about the marketing dollars behind you. Brands control everything. WNBA players have stood up for what they want.”

Bennett understood the luxury NBA players have — guaranteed contracts. Many NFL players, with far fewer guaranteed dollars, are at greater risk of backlash.

“(NBA players) don’t have to put it on the line,” he said. “The NFL controls a certain amount of marketing but at the end of the day, players have more control of everything socially.”

There will many many summer days to dissect the ups and downs of the Seahawks’ plans for returning to the pinnacle. But Bennett held the floor the first day, advocating not for a raise in pay but an elevation of consciousness beyond sports.

He dared to upset some, and is asking a lot of others. He’s not asking for too much.

Public curiosity about the three-year extension he signed earlier in the week caused Pete Carroll to suggest that there is no expiration date for him or his passion to coach.

“(Three years) just the next stop along the way,” Carroll said Saturday. “I know you guys keep wanting to know, ‘How long is he going to coach?’ or whatever.

“I’ve got no end to this. I don’t see it. I’m just going for it. I’m going to go as long as it’s fun and it’s good and we’re winning games. I don’t feel any different than I’ve felt. As a matter a fact, I feel better. I’m under my playing weight. I’m in great shape. I’m ready to go.”

Carroll, 65 in September, was asked if Seattle is his final stop, especially since the town he once owned, Los Angeles, now has a pro football team.

“No. I don’t even want to think that,” he said. “There ain’t no last stop — just keep going. I know you guys are wondering if this is what 65 gets you. I’m jacked up, I’m ready to go. I don’t have any other thought about that.