The two most mission-critical Seahawks? Tackles Garry Gilliam and J’Marcus Webb. Already condemned by one website as the NFL’s worst offensive line, these guys are in charge of making it a lie. 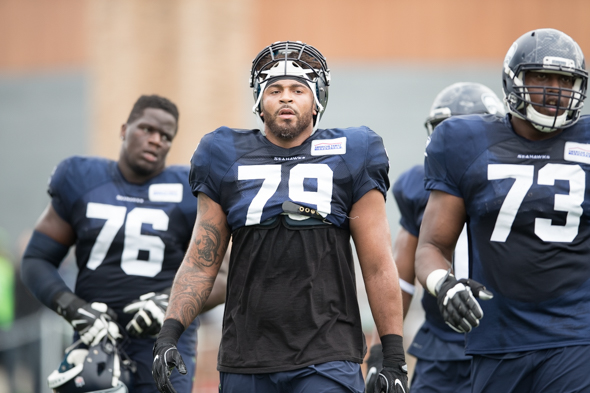 “There’s accountability with every team, but here, it’s everything — being early, no complaining, no whining, no excuses,” he said. “It’s the mentality here.

“They really pay attention to every detail — note-taking, communication, feedback, tempo, working with the defensive line, talking with the quarterbacks, weightlifting, eating and sleeping right. All those things to make it better for us.”

Webb’s position predecessor, Garry Gilliam, is now the left tackle. It’s his third season in Seattle, so he knows the scene that Webb is experiencing. He also knows another part of the local custom that Webb hasn’t experienced: Denigration of the offensive line.

“A great team, in my opinion, is based off an offensive line,” he said. “You can’t do anything without an offensive line. We’ve been a really good team the last few years. So it goes to show you our offensive line is not as bad as some people think.”

If that’s true, then it’s reasonable to say that the two most mission-critical Seahawks this season are Webb and Gilliam. Not the best or most important players, but the two players who must deliver the most after the least is expected from the team’s weakest link.

Here’s what Pro Football Focus wrote recently after ranking with their elaborate grading system all 32 offensive lines. Guess who came in No. 32?

The Seahawks are taking a lot of risks with their offensive line heading into the 2016 season. Their highest-graded lineman last year, Russell Okung (Broncos), left via free agency. Everyone is changing positions, and none of the veteran linemen graded well in 2015. Among those expected to make the roster, the Seahawks have the second-tallest offensive line, on average. Russell Wilson has played behind questionable offensive lines in the past, and the Seahawks have found a way to win anyway, so even if the O-line plays as poorly as it has in previous seasons, it might not hurt Seattle as much as it could other teams.

Besides Webb and Gilliam, Justin Britt is on his third position in three years at center, RG Germain Ifedi is a rookie and LG Mark Glowinski played one game in his first season last year, at right guard.

It borders on the astonishing that the Seahawks think they can get away with this, particularly after the OL misfires in the first half of last season. Then again, they didn’t have much choice, given that LT Russell Okung and RG J.R. Sweezy left in free agency, and they fired starting C Drew Nowak.

At least in Ifedi, they invested a first-round draft choice in the position of greatest need.  And they also gave up to $5.75 million over two years to free agent Webb, who was among PFF’s lowest-rated linemen last year when he played guard for Oakland.

At least the coaches decided on this shuffle early, instead of the middle of exhibition season a year ago. Gilliam said the coaches called and texted him after last season.

“They asked, ‘What do you think about playing left tackle? Russ (Okung) is gone.’ I said, ‘Well, yeah. It’s where I should be.'”

The coaches explained the Gilliam’s athleticism — he played some tight end at Penn State and caught a touchdown pass for the Seahawks in the playoff game against Green Bay — made him a good fit for the demands of the position.

Since he’s the No. 1 protector of QB Russell Wilson’s blind side, he had better be the NFL equivalent of Usain Bolt. Which will be different from Okung, whom Gilliam labeled “an  unorthodox player, so I tried my best to take too much of his stuff.”

Asked to explain what that meant, line coach Tom Cable analogized to basketball.

“Garry is like a point guard, Russ would be like a power forward,” he said. “So he’s going to be niftier, he’s going to move a little quicker, change direction faster. So to the point of being unorthodox: Gilliam going to be more limber, more pure as an athlete.”

Regarding Webb, Cable was a little less generous, owing to the fact that Webb’s Seattle transition was delayed by strained calf that keep him out of most spring practices.

“He looks like “a guy that didn’t do hardly anything in the spring,” Cable said. “Mentally, he’s catching up very well. So for him, the challenge . . . our system and tempo of play is different. He’s been at one extreme, we’re at the other end.

“So to learn to play this fast and aggressive . . . most big guys, that’s not the way this league is. So it’s a learning curve for him.”

Webb is encouraged by the that fact that at 6-7 and 331 pounds, he’s joined an offense with a run-first priority.

Four days of training camp is hardly enough time to make any judgments, but it was demanded of Cable anyway.

“What I’ve been most surprised about is just really how we’ve been able to come back from (the six-week break) and plug right in,” he said. “You know, we’ve just been that far ahead in terms of our learning with all these young kids.

“That’s been the biggest surprise. They’re working extremely hard and they improve each day, so that’s really important.”

To recap “all these young kids,” the starters are a rookie guard, a second-year guard, third-year guys at center and tackle and a six-year vet in Webb, the grand old man at 27.

But as a newcomer, he might be the most jacked.

“Not saying (his previous) coaches didn’t talk to us like men,” he said, “but Pete Carroll talks about staying committed, staying within ourselves, having fun and bringing the juice to everything.

“He lives it. I love to see it, and attach myself to it.”

If the attachment works, and Carroll and Cable cobble together a respectable unit by, say, Thanksgiving, it will be one of the more dramatic coaching feats of their tenures.

If not, Gilliam’s claim of not being as bad as people think can be refuted with a loud chant of, “We’re No. 32!”