Rookie Edwin Diaz, who inherited the role of Seattle’s closer Tuesday, has gotten off to an historic start with the Mariners, who summoned him from AA Jackson in June. 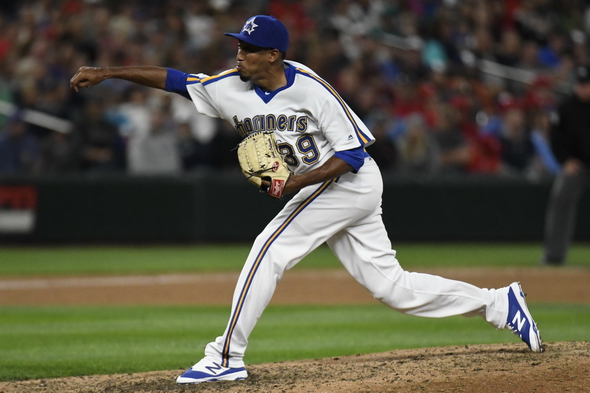 After Edwin Diaz struck out three Boston Red Sox hitters in the ninth inning Tuesday night at Safeco Field to clinch a 5-4 Seattle victory and secure his first career save, the Elias Sports Bureau generated a remarkable factoid about the 22-year-old Mariners rookie, who joined the club June 4 as a call-up from the AA Jackson Generals.

The first of those three strikeouts, Elias noted, marked the 50th for Diaz in his first 25.1 major league innings, making him the fastest pitcher to record 50 career strikeouts among all pitchers to make their MLB debut – since 1893, or three years before Cy Young began his career.

Mull that over: Diaz is the fastest pitcher in 123 major league seasons to 50 strikeouts.

A former minor league starter converted into a reliever May 10, Diaz was put in a set-up role after he joined the Mariners. This week, he made the transition to closer when Steve Cishek — placed on the 15-day DL Thursday with a labrum tear in his left hip — had consecutive implosions, first coughing up a three-run ninth-inning lead Sunday at Chicago in what became a 7-6 loss, then yielding the game-losing homer in a 3-1 setback to Boston Monday.

It’s way premature to start making any comparisons to Ryan or Johnson, both Hall of Famers. But so far, the Diaz storyline couldn’t be more dramatic.

In his past 10 innings since July 10, Diaz has rung up 21 batters, placing him at the top of this list: highest strikeout percentage by rookies, age 25 or younger, with fewer than 40 appearances and a minimum of 25 innings pitched:

A native of Naguabo, Puerto Rico, Diaz came to the Mariners in the third round of the 2012 amateur draft. He began his ascent through the organization with the Arizona Mariners (Arizona League) in 2012 and then worked his way up through Pulaski (Appalachian League, 2013), A Clinton (Midwest League, 2014) and A Bakersfield (California League, 2015) before his promotion to AA Jackson.

What makes the major league emergence of Diaz so striking is that in 89 minor league games, he posted a record of 23-24 with a 3.57 ERA, during which he registered a 25.9 strikeout percentage (409 strikeouts, 1,579 batters faced). But with his triple-digit fastball and sweeping slider, Diaz has a 44.9 K% and 2.00 ERA with Seattle.

Diaz is also averaging 17.67 strikeouts per nine innings, tied for the highest mark in history for a reliever, rookie or not (minimum 25 innings). The top five:

It’s impossible to tell how long Diaz can keep this roll going. But if the nine players listed with Diaz on the first chart above are any indication, Diaz has a shot to be a solid contributor – at minimum – for a long time.

Currently with Houston, Neshek is 29-19 with a 2.88 ERA over his 10 years in the majors. An All-Star this year, Jansen has a 38.9 strikeout percentage and 173 saves over his seven-year career. Feliz, originally with Texas and now with Pittsburgh, has 98 career saves and one All-Star appearance. Givens is 8-1, 3.59 this year with Baltimore.

Diaz has produced quite a splash in his 26 big league games, particularly given his ability to top 100 mph on the radar gun. While he’s dominant right now, it’s impossible to tell if he can maintain once scouting catches up with him.

He inherited a high-pressure job at 22 with extremely limited experience. The test will come when he inevitably has his confidence blown up, as Cishek just did.