FS Earl Thomas now can admit that his shoulder surgery a year ago limited his effectiveness. “You could see it,” said coach Pete Carroll. But Thomas says he’s ready to rock. 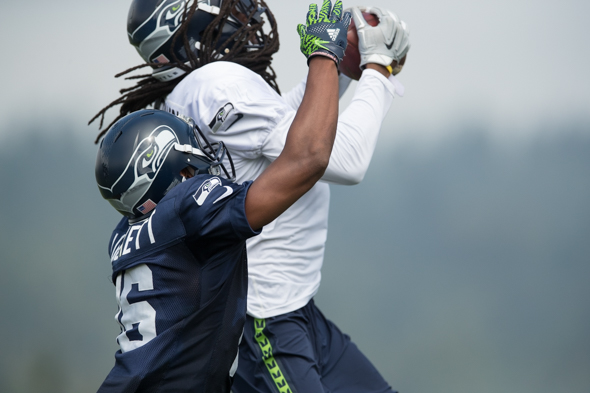 It wasn’t exactly a state secret, but FS Earl Thomas wasn’t really Earl Thomas in 2015. A labrum torn in his left shoulder during the 2014 playoffs required surgery. Thomas admitted Thursday after practice that the repair limited his effectiveness for most of the season.

“I don’t think I was 100 percent,” he said. “I think I got to 100 percent mentally, though. I was able to overcome it. I watched enough film to see and that helped me get over the top.”

But it was plain the trademark Thomas ferocity wasn’t quite there, especially early. Thomas wasn’t cleared to play until Aug. 5 and missed all of camp and the exhibition season, then played with a harness to protect the shoulder.

“I think you could see it,” coach Pete Carroll said. “It took him awhile. Remember, he didn’t play until late in camp. We just had to protect him. He was safe, we knew he was safe, but he wasn’t really confident, he wasn’t at his best. It took him some time.

“It was all part of the start of last season. We were struggling to get it right.”

Not only was Thomas hurting, SS Kam Chancellor foolishly held out for two games and also took most of the regular season to regain form. And CB Richard Sherman was rehabbing an elbow injury.

All of which helps explain how the Seahawks gave up 58 combined points in the first two games, both losses on the road. Thomas and the defense improved through the season, but hindsight suggests the Seahawks may have been better off playing a healthy free safety early — his 64 combined tackles were a career low.

Thomas told ESPN in September that he wouldn’t have it.

“I love the game so much,” he said at the time. “My teammates are important to me. And I know even if I’m not 100 (percent) out there, I still give us a great chance to have success by owning my role.”

None of that is a concern at this camp. Thomas, Chancellor and Sherman have declared themselves fit, which is a big part of the optimism so far for the season — it’s no longer the Legion of Gloom.

“It’s a whole lot better,” Thomas said. “I gave myself to get in good shape. I can run all day now. That’s a big part of the game, especially when it’s late in the game, with everything on the line. You’ve got to be able to think clearly out there, and conditioning is a large part of it.”

Last season, Thomas allowed as to how his mind was often on protecting his shoulder.

“I just had to psyche myself out every game,” he said.

The wounded start makes it all the more remarkable that the Seahawks defense, for the fourth year in a row, led the NFL in fewest points allowed, tying a league mark set by the 1950s Cleveland Browns.

For at least the second time since camp began, DE Michael Bennett had an altercation with offensive linemen during a scrimmage play.

Thursday, the opponent appeared to be C Justin Britt, although in the tangle of bodies, it was hard to tell. No punches were thrown, but Bennett had to be pulled away by teammates, notably CB Richard Sherman and DT Jordan Hill. Carroll then told Bennett he was ejected from practice.

But the coach didn’t seem too worked up.

“This is the passion coming out,” he said. “They want to play this game, they are excited about what is coming up . . . sometimes we lose a little bit of the poise that we need. We can’t play like that. You get in the scrimmage, you get thrown out. That’s what happened, today. That’s just the way we do it.”

Bennett wasn’t available to comment, but rookie OG Germain Ifedi was, He was in a scuffle with Bennett Tuesday. Ifedi dismissed the disruptions and complimented Bennett.

“He knows I won’t back down, the team knows I won’t back down — that’s why they drafted me,” Ifedi said. “We’re just out there competing. We’re trying to make each other better. Off the field, he’s been a great mentor to me. We have a great relationship. But on the field, he knows he’s going to give it his all to make me the best player I can be.”

The one fullback on the roster, Brandon Cottom, may be done for most or all of the season. He was carted off the field after injuring his right Achilles tendon — the first major injury in camp.

“I am not sure, but I think he hurt his Achilles,” said Carroll, who reported the injury was not from a contact play but just a cut during a run. “Achilles is a devastating injury, if that is what it is.”

A 6-2, 262-pounder from Purdue who spent part of last season on the practice squad, Cottom was listed as a tight end but has taken most of his snaps at fullback. The job last season was shared by Derrick Coleman and Will Tukuafu, who became free agents and were not re-signed.

Undrafted free agent Tani Topou, the former University of Washington defensive tackle, was moved back to fullback, where he saw action in spring workouts.

The Seahawks are inviting to camp OG Jahri Evans, 33 next month, to see whether he might help the inexperienced offensive line.

According to multiple media reports, Evans, who made four All-Pro teams and six Pro Bowls in his 10-year career as a starter with the New Orleans Saints, will be in camp Friday.

Evans was cut in February when he refused to take a pay cut to help the Saints’ salary cap needs. Buffalo reportedly had interest, but Evans has been a free agent since.

Evans could be considered for either guard spot, occupied by second-year Mark Glowinski and first-round draft pick Germain Ifedi. Ifedi played tackle in college, and some think that’s his best position.

It’s possible he could slide to right tackle if J’Marcus Webb doesn’t work out. Webb, with his fourth team, missed spring workouts with a calf strain.