New Sounders plan: Compete, inside and out

Midseason changes are risky, but interim head coach Brian Schmetzer’s moves seem to have gotten the attention and effort of the Seattle Sounders. 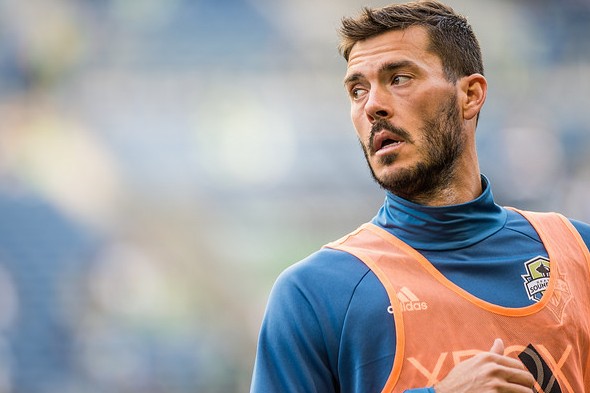 A week after stepping up to replace dismissed head coach Sigi Schmid,  Seattle Sounders interim coach Brian Schmetzer is making a number of changes to try to help the ninth-place club climb the Western Conference standings. Above all, competition for starting minutes has taken hold of Seattle’s training sessions. Results have looked lively.

At the Starfire Sports complex in Tukwila, where the Sounders train, the club spent most of Thursday’s training session in 11-on-11 scrimmages. In the Schmid era, such scrimmages usually occurred days before a game, with one team comprising the weekend’s probable starting lineup facing off against the remainder of the first team.

Thursday, Schmetzer did things differently. A series of shorter scrimmages were held, and between segments, a rapid reassignment of players occurred as teams were jumbled into different combinations.

Schmetzer explained his rationale for the Yahtzee-like approach.

“It’s a different way of coaching the 22 field players today, making sure they understand what my expectations are, on top of getting to see a couple of different combinations and getting the new guys intermixed with the squad.”

The philosophy is similar to the “next man up” mantra espoused by the team with which the Sounders share the Clink, the Seattle Seahawks. Pete Carroll has always encouraged competition within the ranks, resulting in elevated play.

The importance of knowing how to fill the spot of the man in front of you is more important in football, where the physically taxing nature of the game means players are likely to drop, sometimes for a series, sometimes for a season. The approach seems to have breathed some life into the 6-12-3 Sounders, who hope to turn that energy into momentum at Orlando City Sunday (4 p.m., FS1).

Captain Brad Evans said that the idea is aided by Schmetzer’s arrival in the job.

“It definitely is different, especially after having the same coach for so long,” Evans said. “Any time there’s a switch like that, it gives the team a bit of a boost.

“Guys want to prove themselves. Sigi obviously had his guys who he thought could get the job done, and now you bring in a new head coach who maybe has a different philosophy. At any moment’s time, I could be on the outside looking in. Keeping guys on their toes is the number one thing that comes with the change.”

Schmetzer is also encouraging players to take ownership of the club. Before and after every game, Schmetzer gives a talk before clearing all the non-players from the locker room to let the players discuss things by themselves.

At practice, too, Schmetzer is giving greater agency to players, letting them determine tactics they would use during scrimmages, before bringing both teams together at the end to discuss what worked and what didn’t.

Schmetzer said that feedback from players, who had come to him privately, had been positive regarding both methods.

Sunday will be Schmetzer’s second game in charge, one week after a single defensive letdown cost two points at home against the LA Galaxy. Apart from the error, though, the Sounders looked like a different team than the one that had circles run around it in the high heat of a 3-0 loss at Sporting Kansas City.

Evans reflected on whether the SKC loss was the low point of the year.

“Coming in after that game was massively disappointing, and nobody knew what was coming the next week,” Evans said. “The morale, I thought, had always remained the same. Guys came out the next day and worked extremely hard, but I think the morale has been different now that there has been a change.

“Maybe I was just blind, or was used to guys coming in every week and whatever happened on the weekend happened. But now things are different. There’s a sense of urgency now. Maybe I was missing something that was there, but we’re in a good spot now.”

The response of Evans might hint to what the Sounders always leaned on the locker room: Professionalism. The club relied on the fact that its players would come in and execute their jobs to a high degree. For seven years, they didn’t have much need of rousing speeches. They sold out stadiums, roundly beat opponents, and established themselves as a force in MLS.

The professionalism is still in the locker room, but now a sense of player ownership and competition seems to be growing. With all three, Seattle could look like a different team Sunday than the one that spent the first half of the year sinking to the bottom of the table.