Cooperstown was as serious as the Vatican. It’s time for a celebration of the best baseball player in Seattle history. Let’s do the thing right and party down. 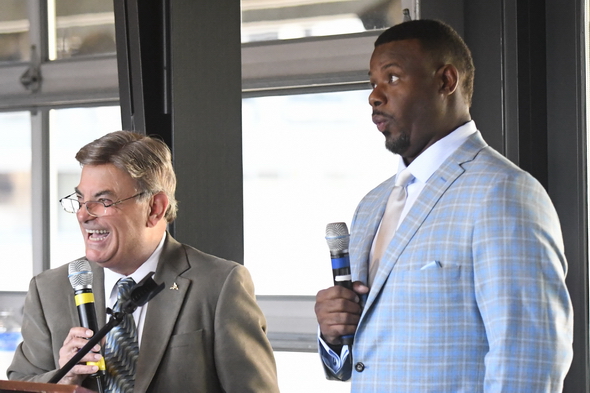 Walking into the Mariners clubhouse at Safeco Field Friday afternoon, I spotted Ken Griffey Jr. near the entrance, posing for photos with staffers and players along with his Hall of Fame plaque. He was wearing a pale blue sports jacket with window-pane checks, disturbingly similar to the odd suit he wore for a recent Sports Illustrated cover shoot.

I saw my opening.

“Been meaning to ask you about that suit on the SI cover,” I said. “Did you lose a bet?”

His eyes widened. With Griffey, you have to go hard and fast to stand a chance.

“You might remember I was on the cover of GQ,” he said, peering at me. “I think you were on National Geographic.”

The bat is retired. Not the wit. If that was my at-bat, I struck out on one pitch.

The Kid was back in town. Big party Saturday. Might be more fun than the one in Cooperstown, NY.

His Hall of Fame induction was a fine thing. A milestone for him and the franchise that he carried for most of 11 years. But baseball and its hall take themselves as seriously as the Vatican. Lots of reverence, awe, quiet voices. I think I might have heard a hymn or two, or maybe somebody read a psalm.

Here’s hoping Saturday, when Griffey’s No. 24 jersey is retired, Seattle can sneak in some glee in the celebration of its greatest player. This ain’t church.

Griffey certainly belongs to the baseball nation. But first and foremost, he belongs to Seattle. So this is personal for many of us, and it should be a hoot.

A few minutes after he slayed me, he took to the interview room for another series of questions about what it’s like to be him. Asked about the emotional difference between Saturday’s event and Cooperstown, he turned reflective.

“I don’t take what I do lightly. Tomorrow is definitely one of the things that is special, and I get to enjoy it with the people who’ve seen me, from a teenager to a 40-year-old.”

It’s that timeline, from his 1989 MLB debut as a 19-year-old to his 2016 ascension to Valhalla at 45, that has us in his grip. In a pro sports landscape where the average career span is less than four years, Griffey has been in the civic culture long enough for grandparents to tell Griffey stories to grandkids.

One questioner said he was a sophomore in high school when he watched Griffey hit his first home run. What went through Junior’s mind at that moment? Griffey grinned.

“Don’t fall,” he said. “I showed a video (of the homer) to my kids and they laughed at me: ‘Look at that trot.’ It was terrible. I hit a few more (homers), so I could perfect it.

“They were all over me. You gotta have some pretty thick skin at my house. There’s no shame — my hair, how high-pitched my voice was, my rap song.”

Griffey was at the heart of more than his share of controversies during his tenures in Seattle, particularly surrounding departures. But there is no debate about three things — his greatness as a player, his playful wit, and his competitiveness, even though the game came so easily to him he seemed sometimes on glide.

“Everyone sees the smile and thinks, ‘He doesn’t care,'” he said. ” They don’t understand that deep inside, I want to bury somebody. I don’t want to show emotions (that say), ‘You got me.’

“I want to win every game, every at-bat, catch every ball. Throw out every runner.”

Unfortunately for him, he played for an organization that supported him poorly. The Mariners made two playoff appearances during his time — one of which, amazingly, was enough to save baseball in Seattle in 1995. So enthralled was Seattle with Griffey that he was the central figure in the rationale that pulled $380 million in public funds to build Safeco Field.

As a symbolic demonstration of their gratefulness, the Mariners ceremony Saturday includes a retirement of No. 24 for not just the major league team, but the entire organization — believed to be an MLB first. As a final touch, all current players will wear 24 during batting practice.

The sacred numeral shall never be shared again in the land of moss and geek.

(Heads-up: If you are attending the sold-out event, be aware that the ceremony begins at 5:30 p.m., gates open at 3:40 and it’s Seafair weekend.)

Griffey said he picked 24 because he hit 24 homers his senior year. He asked for it as part of his rookie contract. It keeps popping up in his life — his first apartment in Seattle was 1124, the address of his first home was 24606 and this summer is the 24th anniversary of his marriage to Melissa.

And it’s also the reverse of 42, Jackie Robinson’s number, retired by all of MLB.

The numbers will be side by side at Safeco Saturday.

“For a team to do that is the ultimate sign of respect for what you did on the field,” he said. “It’s overwhelming and humbling, because of the guy I’m going up next to, who basically sacrificed his life for guys like me.

“For what he’s done — to allow pretty much everyone to play this game.”

After the first inning Friday night, Griffey was introduced on the red carpet next to the visitor’s dugout, and 40,354 snapped to their feet, as if on the same string.

The weekend party has begun. Let Cooperstown have the august feel;  Seattle will do August with sun, Seafair and Griffey. It’s worthy of a National Geographic cover.