One of the busiest, newsiest weekends in Seattle sports was capped by the Mariners’ three-game sweep of the Angels. Past Mariners heroes Griffey, Ichiro and A-Rod kept the chatter high. 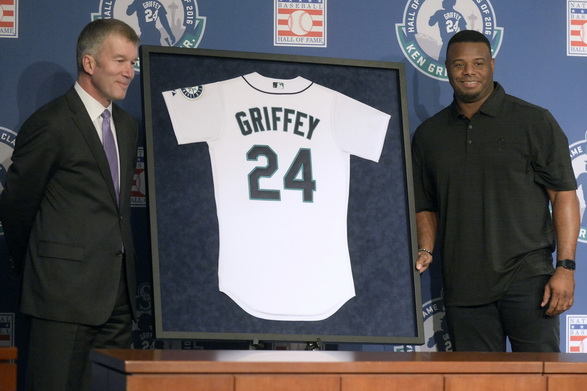 With club president Kevin Mather, Ken Griffey Jr. learned that his jersey will be retired throughout the Mariners organization — except for the 20,000 fans who received free jerseys at Sunday’s game. / Alan Chitlik, Sportspress Northwest

Can’t remember a baseball Sunday like this in Seattle’s sports history. Beyond baseball, maybe there hasn’t been a local sports-news day like this. The tell-tale sign? The Seahawks, with the always-scintillating first scrimmage of training camp, ranked next-to-last in significance.

In case you were face-down in Lake Washington after a log-boom pratfall, permit me to catch you up:

On the day Ichiro (a Mariner from 2001-12) finally delivered his 3,000th MLB hit with a triple, Alex Rodriguez (1995-2000) was being shoved out of Yankee Stadium, the bosses telling him his last game is Friday, even though they still owe him about $27 million in salary through 2017.

“It’s been very painful and embarrassing to sit on the bench. It’s been awkward,” Rodriguez, 40,  told reporters in New York. “We all want to keep playing forever. But it doesn’t work that way.”

Meanwhile, Ichiro at 42 remains productive without the aid of pharmacy, unless beef tongue, one of his favored dishes, is declared a performance-enhancer. And he’ll beat A-Rod through the door at Cooperstown.

It is not expected that Rodriguez will be given a three-day celebration marking his career’s end, although a subway ticket is possible.

Huskies football coach Chris Petersen had his opening press conference for fall camp Sunday and immediately jammed both feet so hard on the brakes of high expectations for UW that he nearly pushed himself through the floorboards.

“We’re 7-6, played no football games, and now we’re ready to win the Super Bowl,” Petersen said derisively. “I mean, it’s like, really? We’ve got to go play games. Let’s talk after game six. Then it’s like, OK, one way or another. But until then, there’s just so much unknown.”

Memo to Petersen: The Huskies have been absent from the Rose Bowl as long as the Mariners have been gone from the playoffs. If people want to jump on your bandwagon, scoot the hell over and take their money.

Over at the VMAC in Renton, the Seahawks had their first scrimmage, and the media had a chance to meet the newest Seahawk, former Saints All-Pro guard Jahri Evans, signed Saturday as the emergency safety net for an inexperienced offensive line.

Despite the fact that he’ll be 33 this month and was dumped by New Orleans, his team of 10 seasons, he did not lack for confidence.

Pro tip: When in Seattle, go for the beef tongue.

Speaking of aging warriors seeking a fresh start, Clint Dempsey’s hat trick Sunday gave the Sounders a 3-1 triumph at Orlando City, the first win in four games for Seattle and more goals than Dempsey had scored all season. It also was the first win for interim coach Brian Schmetzer.

Anyone suggesting that Dempsey was inspired by the firing of coach Sigi Schmid . . . would probably know something.

The International Olympic Committee was so mad Sunday at the systemic, government-sponsored doping of Russia’s Olympics team that it punished the sibling. Courage like this is typically found only in the U.S. Congress.