After going hitless in his first three at-bats Sunday at Colorado, Miami’s Ichiro Suzuki ripped a seventh-inning triple off the right-field wall at Coors Field, writing his ticket to the Hall of Fame. 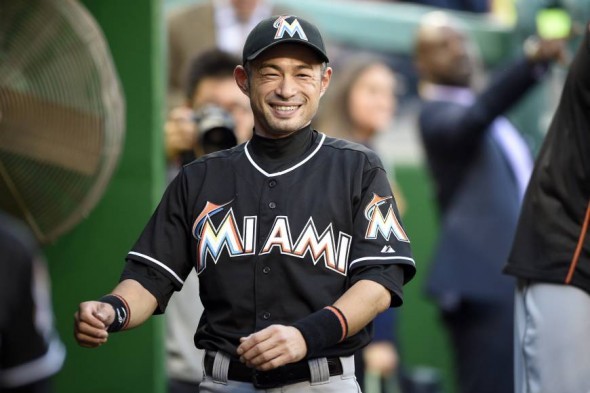 Ending a tortuous slog into history, Ichiro Suzuki finally notched his 3,000 career hit Sunday, at Coors Field in Denver, in his 2,452nd major league game and 9,567th at-bat. The  achievement assures his first-ballot passage into the Baseball Hall of Fame. The historic knock, off Colorado reliever Chris Rusin in the seventh inning, nearly cleared the wall in right field.

Instead, it bounced high off the barrier and Ichiro dashed easily to third for a stand-up triple. The feat drew a standing ovation from the throng of 40,875 at Coors, many of the fans sporting “Ichiro 3,000” signs, one even waving a one-time Safeco Field artifact, the “Ichi Meter.”

“I just don’t have any words for how grateful I am,” Ichiro said. “I was more happy for the people around me who have supported me and cheered me on, I really felt that today.”

”It’s a tribute to his work ethic and everything that he believes in,” said Ken Griffey Jr., an Ichiro teammate in Seattle in 2009-10 who was feted in a weekend-long celebration at Safeco Field, where his No. 24 was retired. “It is something special, not just for the guys who played with him but for all of baseball and all the people in Japan. This is something that’s huge. I know that he doesn’t take it lightly. He works his butt off day in and day out.”

“To think back to that first year of 2001, that this young man would be playing at 42 and going for 3,000 hits, I didn’t think it was possible then,” Ichiro’s manager in Seattle, Lou Piniella, told ESPN recently. “Just 2,000 hits would have been an outstanding achievement.”

Retiring Mariners CEO Howard Lincoln issued a statement almost as soon as Ichiro, a Mariner icon from 2001-12, reached third base, where he was mobbed by his Miami Marlins teammates.

“On behalf of the Seattle Mariners organization and the fans of the Northwest, I would like to congratulate Ichiro on his 3,000th hit in Major League Baseball,”  Lincoln wrote. “It is another historic achievement in his great career . . . Ichiro’s contributions to the Mariners franchise were immeasurable . . . Prior to Ichiro’s first game for the Mariners in 2001, the late Pancho Ito, a Japanese baseball broadcaster and historian, said, ‘He is a genius with the bat.’ Mr. Ito was absolutely correct. A tip of the Mariners cap to Ichiro. “

Ichiro is the fourth player in major league history with 3,000 hits and 10 Gold Gloves, following Willie Mays, Roberto Clemente and Al Kaline. But he had a rocky road to the hit milestone.

After collecting No. 2,998 July 28, a single as a pinch hitter in Miami’s 5-4 loss to St. Louis, Ichiro went 0-for-11 over his next seven games (six as a PH) before collecting No. 2,999 Saturday night, an infield single against Jordan Lyles of the Rockies in the eighth inning.

Ichiro missed his first chance at 3,000 an inning later when he hit a chopper back to the mound against Scott Oberg, nearly beating the throw to first.

Batting in the sixth spot as Miami’s center fielder Sunday, when he received a rare start, Ichiro started 0-for-3, a strikeout on a 2-and-2 slider in the first inning with the bases loaded, a ground out to pitcher Jon Gray in the second, and a ground out to shortstop in the fourth.

In the seventh, Rusin having relieved Gray, Ichiro looked at a couple of balls down and away and then lashed a middle-middle fastball over Gerardo Parra’s head in right. For a moment, it looked much like the inside-the-park home run that Ichiro hit in the 2007 All-Star Game in San Francisco.

But Ichiro didn’t burst up the first-base line, obviously thinking his shot had sufficient distance. But when his jolt began to lose altitude, Ichiro jetted to third, becoming only the second member of the 3,000-hit club to reach the milestone with a triple (also Paul Molitor, Sept. 19, 1996).

Ichiro is the 30th player to achieve 3,000 and the first to do it at Coors Field. Every eligible player with 3,000-plus hits is enshrined in Cooperstown with the exception of Rafael Palmeiro, a 2005 retiree who has failed to win support due to bad behavior off the field (PEDs abuse).

Pete Rose (4,256 hits) is ineligible due to his gambling activities. Derek Jeter (3,465), who retired after the 2014 season, is not yet eligible, and Alex Rodriguez (3,141), a Mariner from 1994-00, was told that he will play his final game for the New York Yankees Friday, then no longer play for the Yankees despite being owed $27 million.

Due to his bad behavior, and based on the HOF snubs issued to fellow cheaters Barry Bonds, Mark McGwire and Roger Clemens, A-Rod is not expected to receive widespread support for Cooperstown for a long time, if ever. Bonds, now a Miami coach, was one of the first Marlins to reach Ichiro at third to offer congratulations after the 3,000th hit.

Ichiro didn’t begin his major league career until he was a 27-year-old rookie with the Mariners in 2001 — three years older at his debut than any other member of the 3,000-hit club. Although the second-oldest to collect 3,000, Ichiro achieved the mark in his 16th MLB season. Before Ichiro, only Pete Rose  did that. Clemente and Wade Boggs both reached in 18 seasons and all  other members of the 3,000-hit club took at least 19 years to get there.

Ichiro, who amassed 1,278 hits in nine years (1992-2000) with Japan’s Orix Blue Wave, joined the Mariners the year Rodriguez bolted for Texas (2001) as a $250 million free agent, and collected 242 hits, batted .351 and won the AL’s Most Valuable Player and Rookie of the Year awards. That blazed a trail forl Japanese position players that followed.

Slightly more than a month after No. 2,500 (July 23), the Mariners traded Ichiro to the New York Yankees for RHP Danny Farquhar and RHP D.J. Mitchell. Farquhar went 3-12, 3.85 with 18 saves in three seasons in Seattle. Mitchell never pitched for the Mariners.

By 2014, the 40-year-old Ichiro had become a semi-regular with the Yankees. Last season, after signing with the Marlins as a free agent, he had his worst year, batting .229 in 398 at-bats. That, plus his age, reduced him to a primarily pinch-hitting role this season, but he has performed as if rejuvenated. Before his recent 0-for-11, Ichiro was hitting .340, enabling him to get in position to reach 3,000 Sunday.

It would have been quite the spectacle if Ichiro had remained with the Mariners and collected his 3,000th Sunday on the final day of Ken Griffey Jr. Weekend at Safeco Field. Of course, that won’t deter the Mariners from plotting future Ichiro bobblehead promotions, a task probably already well under way.