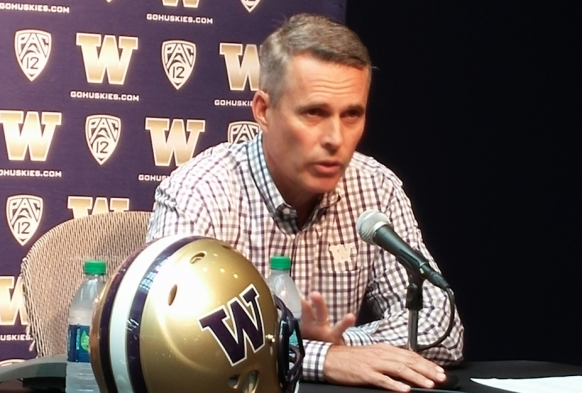 For a guy who seems on the edge of a breakthrough for a college football program that was pathetically hanging on to a Don James crush nearly 25 years done, Chris Petersen seemed, well, on edge.

At his opening press conference Monday at the start of fall practice rich in expectations, the Washington coach spent a surprisingly large chunk of his 45 minutes complaining about impacts social media are having on his job. For a guy who is practiced at the art of talking his way around an elephant without ever acknowledging the pachyderm, Petersen was uncharacteristically blunt.

“Let me just tell you, I hate social media,” Petersen said. “But we’ve got do it. All we try to do is play by the rules and do the best we can with it and get guys fired up on Washington.

“But it’s a little bit scary because we can retweet this, but not that. We can do this and not that. Every time we’re doing that I’m like, ‘We good here? You sure?’”

Petersen, as well as many of his contemporaries, have recent reason for some renewed angst. Following years of confusion, missteps and buffoonery, the NCAA — the organization that is over its head in anything beyond setting up a 64-team tourney bracket — attempted to clean up its recruiting rules regarding member schools’ use of social media.

The changes were implemented Aug. 1, slightly liberalizing the use of the platforms, but mostly as a self-service so the NCAA can reduce managing the unmanageable. Coaches are allowed to retweet, like, share, repost or otherwise approve the social media activity of a recruit. They are not allowed to comment, tag or retweet with comments.

Here’s how the Arizona State athletic department explained it in a graphic:

One of the likeliest outcomes of the changes is that recruits will now have an accepted metric by which to judge the interest of each school’s coaches and fans. The retweet count will indicate the intensity of football love. Or so they think.

“Oh, that’s probably happening right now,” Petersen said. “The more fans that somebody has, you don’t think that has an effect on a 16-year-old kid? It absolutely does.”

Apparently, a strategy has begun:

Petersen’s anxiety stems from reduced control of the recruiting process. If you’ve ever been around a major college football coach who is feeling out of control, the advice is always to back out of the room quickly before spontaneous combustion leaves you covered in entrails.

Petersen kept himself under control. But he likened social media, inaccurately, to mind-reading.

“It’s like when you’re a kid, you go, ‘It would be really cool if you could be a mind reader,’” he said. “Now you’re seeing all these peoples’ opinion that you don’t know anything about. It’s like you’re reading everyone’s mind, and that’s really a bad thing. These random thoughts come out.”

Well, no. There’s no more or less random influences in recruiting now than before. The only things that have changed are speed and volume. The recruiting game remains the  same often-dubious enterprise; there’s just more would-be manipulators with instant access.

Petersen tried to sound like he wasn’t totally alienated by the changes.

“I think (social media) is a game-changer in the world, obviously,” he said, “in a lot of unique and cool ways. Just like the internet itself has changed the world. For the most part in a good way, but in a lot of ways not.

“It’s the world we live in so we’ve got to figure out how to do it right. I don’t tell those kids, ‘No, you can’t do it.’ But to be educated about it in the right way is important.”

Petersen and all coaches know that their ability to maintain a virtual fence around players from the real world — largely in order to preserve the NCAA’s false narrative of amateurism — is a losing battle. But until big-time college sports drop the hypocrisy and fully professionalize in word as well as deed, coaches are stuck waffling between the real world and the pretend world.

Regarding social media, Petersen knows that a ban is fruitless, so he appeals to a higher standard.

“I think the smart ones do it themselves,” he said. “Because you can’t tell me if you’re completely into (social media), that doesn’t have an effect on your psyche. I don’t pay attention to that stuff, yet I still see it in the job, and it gives you a reaction.

“I know (starting QB) Jake Browning won’t be all over that, and not because I’m saying, ‘Jake, don’t do that anymore,’ (but) because he gets that it’s time to focus.”

Not many kids have Browning’s maturity. But Petersen tried to make it sound as if the noise would get to him, too — if he read it. He claims he never looks at his Twitter mentions.

“I tell our players that if I paid attention to all the arrows that are shot at me every day,” he said, “I don’t care how tough-minded you are, it’s going to have an affect on you.”

Perhaps. But Petersen’s lamentations sound a bit like the European elites 500 years ago when they heard of Gutenberg’s invention of the printing press and its ability to spread knowledge among the great unwashed. Alexander Graham Bell also scared the established order with his telephone contraption. Similar wails ensued with the innovations of radio, film and television.

My favorite anecdote about media change came from Socrates, who lamented the proliferation of the latest in Greek technology of his day — the written word:

[Writing] will create forgetfulness in the learners’ souls, because they will not use their memories; they will trust to the external written characters and not remember of themselves. The specific which you have discovered is an aid not to memory, but to reminiscence, and you give your disciples not truth, but only the semblance of truth; they will be hearers of many things and will have learned nothing; they will appear to be omniscient and will generally know nothing; they will be tiresome company, having the show of wisdom without the reality.

If Petersen doesn’t sound like a latter-day Socrates, I will eat my toga.

Perhaps he missed the irony Monday that his audience was made up almost exclusively of workers in an industry disrupted by technology. Businesses have yet to hit the bottom of their financial craters.

As you may have suspected during Petersen’s detailed account of change slamming his castle doors, eyes remained dry.