RB Thomas Rawls finally was allowed to return to practice, but injuries to rookies have left a big hole that four-year vet Christine Michael is eager to hit. 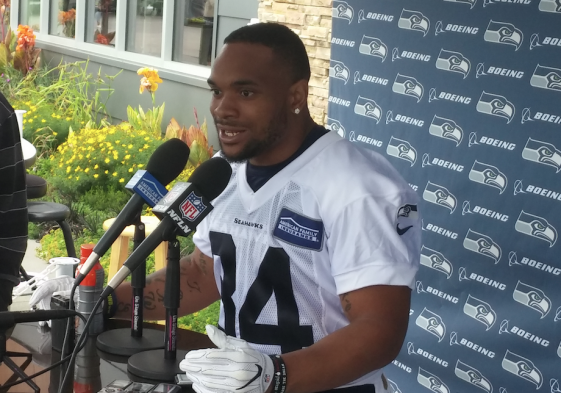 Thomas Rawls was even amped for his press conference. / Art Thiel, Sportspress Northwest

Here’s how awkward the running back scene is for the Seahawks: At 25, Christine Michael is the gray eminence. The guy who four years ago showed up thinking he knew everything and discovered he knew little, is now mentoring the herd of kids the Seahawks are throwing into the gaping void left by the retirement of Marshawn Lynch.

“It’s crazy, man,” Michael said after practice Tuesday,” because I was the youngest here a couple of years ago. I’m just embracing it and answering every question they have.”

One question they won’t have is the identity of No. 1, because Thomas Rawls finally took the field Tuesday. An ankle broken early in December ruined a splashy debut season — he led the NFL in yards per carry at 5.6 — but Rawls Tuesday wanted to make sure all understood emphatically that his surgery and rehab were successfully behind him.

“I’m feeling good, I’m feeling awesome, I’m feeling great, I’m feeling phenomenal,” a beaming Rawls said, already passing Lynch’s record for career exclamations. “Just taking it day by day and looking forward to getting back out there with my Seahawks.”

But the Seahawks were sufficiently insecure about the arrival of this day that in April they spent three of their precious draft choices — a third, a fifth and a seventh — on running backs. Replacing the greatest running back in team history and one of the NFL’s fiercest warriors was not going to be done by a single young player.

So they hired a platoon. Good thing too.

C.J. Prosise, the third-rounder from Notre Dame, missed spring and all of camp so far with injuries. And he spent only his senior year as a running back. Zac Brooks, the seventh-rounder from Clemson, is also out with injury, after having carried just 41 times in his final college season.

The fifth-rounder, Alex Collins of Arkansas, has been impressive in camp, although he sat out Tuesday with a sore ankle. So when the Seahawks open the preseason at 1:30 p.m. PT Saturday at Kansas City, Collins and Michael likely will be the main running backs, because the Seahawks aren’t going to expose Rawls to the meanness of the NFL just yet.

Maybe not until the regular season opener.

“There’s no need to rush him at all,” said coach Pete Carroll. “He’s a very violent football player. He needs time to get ready to play the way he does, so we’re going to take it however long that is.

“I don’t think (having to play in exhibitions) is a consideration, like we have to play him. We’ll see. We have plenty of time here.”

Judging by his demeanor at the podium, as well as from the reports of his ruthless rehab, it would be an unpleasant experience to be the one to deny Rawls playing time. Rawls was so amped for his first presser that he asked and answered his own questions.

“Was it tough? Yeah,” he said. “A lot of tears? Yes. But am I here right now, standing and walking and running? Yes. Did it take a lot of work? Yes.

“But I know that I’m built for it. I’m proud to say where I’m from — Flint, Michigan, where you’ve got to be tough. It’s nothing that can stop me.”

Well, then . . . let us lash him to the battlewagons and let our swords run with the blood of the infidels!

Sorry.  I know it’s training camp. But Rawls has that sort of effect on people.

“He was so vicious about the workouts, that the stuff that he was doing to prove to the trainers that he was ready — the hops and the jumps and the bursts, and the work over a long period of time — it was unreal. I don’t think there’s anybody in better shape than Thomas.”

But as they attempt to keep Rawls calm in the horse trailer, Michael has himself another opportunity. Humiliated after being cut last season as a second-rounder, he wandered through Dallas and Washington before being re-signed by Seattle after Lynch was hurt. He came back humbled and eager, regaining much of the coaching staff’s respect that he lost by screwing up so often.

“I’m taking it a lot more serious,” he said of training camp. “I’m making sure I know what I’m doing. Putting in the extra work. Doing the small things.

“(Last year) was a humbling experience. This is such a good place.”

In four NFL years, Michael has only 106 regular-season carries, so it’s not as if he’s established himself. He’s no less inspired than Rawls.

“I’m just trying to be the guy they drafted — living up to expectations,” he said. “I feel like I’m being watched.

“Especially because I’m the oldest running back in the room. They look up to me.”

When it’s recalled that he used to be nicknamed Least Mode, this Seahawks position is, as Michael put it, crazy.