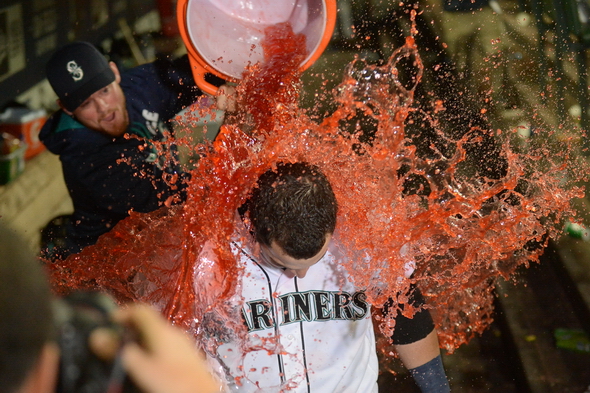 After 3B Kyle Seager twice delivered score-tying hits, in the eighth and 15th innings, C Mike Zunino hit a sacrifice fly for the winning run to end the Mariners’ longest game of the season with a 6-5 win (box) over Detroit Tuesday night at Safeco. In the 15th, the Tigers took a 5-4 lead on Victor Martinez’s leadoff homer, but Seager and Zunino countered to end the 4-hour, 51-minute marathon with the Mariners’ seventh win in the past eight.

After Seattle’s earlier attempt at a momentum-swinging homer drifted foul – 1B Adam Lind’s near grand-slam with the Mariners trailing 4-1 in the fifth – Seager came through with a three-run shot in the eighth. His 21st home run of the season came with two outs and tied the score 4-4.

Seattle’s bullpen was the story, throwing nine scoreless innings before Ariel Miranda – Friday’s scheduled starter –  served up the Martinez shot. That snapped a streak of 17.2 innings of scoreless baseball by the bullpen.

Starter Wade LeBlanc was hit pretty well, but almost miraculously came out of it with just four runs. Detroit’s first four batters got hits for 2-0 lead, but the only other runs the Tigers scored off LeBlanc came on leadoff homers in the third and fifth. He allowed 10 hits over five innings before the rejuvenated pen kept the Mariners in the game.

Veterans Nick Vincent and Vidal Nuno tossed three scoreless innings before new closer Edwin Diaz did his thing in the ninth – mowing down three Tigers in order while striking out Detroit slugger Miguel Cabrera on a 100 mph fastball to end the inning in a non-save situation. Diaz’s partner in heat, Arquimedes Caminero, retired all six he faced in the 10th and 11th innings. Tom Wilhelmsen worked his way out of a jam to get through the 14th.

2B Robinson Cano and DH Nelson Cruz got the Mariners on the board when Cruz followed Cano’s leadoff double with an RBI triple in the fourth, pulling Seattle to within 3-1. Rookie LF Guillermo Heredia had three hits to raise his average to .280.

Seattle had 14 hits but left 10 runners on base. Seattle squandered a golden opportunity when the Mariners loaded the bases with no outs in the sixth, only to come up empty.

Manager Scott Servais’s biggest mistake came when he pinch-ran for 2B Robinson Cano in the 12th. Then again, who would have figured this one would go 15?

“There’s something about this team. It’s a lot of fun. There’s a lot of personality.” — Servais

“That was crazy. Frustrating in the beginning, and it got real long, but it worked out well.” — Seager

SS Ketel Marte was activated from the 15-day disabled list before the game. Sunday hero Michael Freeman went back to Triple-A . . . The Mariners solidified their rotation for the three-game series at Oakland over the weekend. The most surprising news was that LHP James Paxton is expected to be back on the mound Saturday – six days after taking a line drive off his left elbow. X-rays showed no structural damage. Paxton is expected to go through a light throwing session Wednesday. If all goes well, he’ll be on the mound for the second game of the A’s series. Friday’s starter is listed as LHP Ariel Miranda, who will make his second start since being acquired from Baltimore in the Wade Miley deal  . . . Detroit claimed RHP Donn Roach off waivers Tuesday. Roach was designated for assignment by the Mariners two days earlier. Don’t expect to see him this series, however. Roach was assigned to Triple-A Toledo . . . None of the five teams the Mariners face in the 16-game stretch that follows Wednesday’s game will be against teams currently above .500. The Mariners play road games against AL West also-rans Oakland and Los Angeles before hosting the struggling Brewers and Yankees. The stretch of non-contenders ends with a four-game road series against the Chicago White Sox.

A pair of perennial Opening Day starters and Cy Young contenders will be on the mound in a matchup that would have had a little more cachet five years earlier. Seattle RHP Felix Hernandez (6-4, 3.55 ERA) and Detroit RHP Justin Verlander (12-6, 3.52 ERA) have 17 Opening Day starts between them and rank third and sixth, respectively, on the list of career strikeouts among active pitchers. They’ve faced off twice before, the last time in 2009, each earning a win. Hernandez missed time with a quad injury this season but seems to be getting back into form, while Verlander, three years his senior at 33, has been pitching some of the best baseball of his career over the past month – he’s 5-0 with a 1.85 ERA over his past seven starts.