Valdez sits upon the hottest seat for Sounders

As the Seattle Sounders look to rally down the home stretch in the regular season, the lack of production by Nelson Valdez, paid $1.5 million a year, creates a big question about his future with the club. 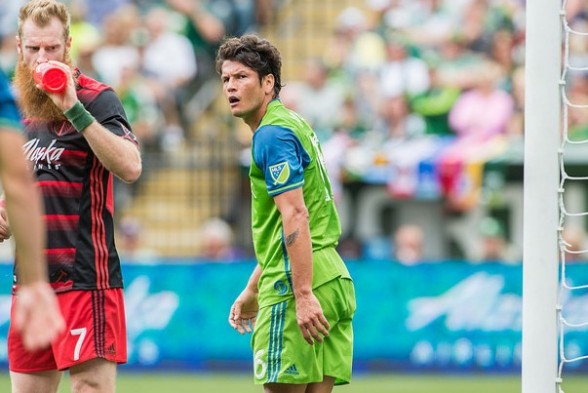 Nelson Valdez is being paid a lot and has produced very little, much to his chagrin. / Charis Wilson, Seattle Sounders FC

Sunday’s 3-1 win over Orlando City did a great deal to help restore things to their natural order for the Seattle Sounders. Players seem to be breathing easier. Nelson Valdez, however, will have found little relief in dealing the Lions their first defeat at home in more than a year. He’s trying to prove his worth to the Sounders.

Brought on as a substitute at the hour mark of the Orlando match, Valdez had a gift chance served to him by Jordan Morris in the 80th minute. Morris made a run into the box on the left side of the net, drawing two defenders and Orlando keeper Joe Bendik, before threading the ball through all three to leave Valdez with an open net inside the six-yard box.

As the ball came across his body, Valdez struck with his right foot at a full sprint.

Somehow, the ball came off his heel, cutting across the face of goal and redirecting off the left post as the Paraguayan’s momentum carried him tumbling into the netting.

Valdez looked behind him, then upward, with a sense of disbelief.

Asked Tuesday what his reaction was when he saw the failure, Valdez was honest with the circle of reporters gathered at training.

“(expletive) (expletive), but it’s happened,” Valdez said. “What can I do? I can’t change that. I want to score, and sometimes you’re unlucky. I’ll keep working.”

Interim head coach Brian Schmetzer at times had described the Sounders as “snake-bit” in some earlier losses that have left them with a 7-12-3 record, ninth in the Western Conference with 12 games left.

By that description, Valdez might have fallen into a Raiders of the Lost Ark snake pit.  The 32-year-old forward has scored one goal during the regular season in Seattle. It came in his debut the past summer, in a 4-0 win against Orlando City. Valdez scored one more in the playoffs to help Seattle defeat the LA Galaxy for the first time in the club’s postseason history.

Needless to say, the return on investment by Valdez, paid about $1.5 million per year, is abysmal. Valdez’s regular-season scoring drought, spanning 1,048 minutes of playing time back to his 51st minute header against Orlando City a year ago, is similarly woeful.

When Valdez was signed, it was with the intent that he would be able to provide goals if Clint Dempsey or Obafemi Martins were unavailable. Unfortunately for Valdez, the goals have not come, placing the largest pressure on him, regardless whether the club makes the playoffs.

It is unlikely, barring a complete renaissance in his play, that the striker will be in Seattle next season. General manager Garth Lagerway seems to be forming a club that plans to maximize every dollar that it spends, and unless Valdez is willing to stay for a massive pay cut, he likely won’t fit after so little production.

The rest of the season will be an important audition for Valdez. His agency, CES Eleven, hopes he can return to his winning form to make him more marketable. But if the back of the net remains elusive, Valdez will not be flush with options when his contract is up.

Valdez tries not to focus on the misses.

“I was upset after the game,” Valdez said. “During the game I didn’t think about it, because we were winning, but for a striker to not score like this is very difficult. All I can do is work hard and maybe I’ll be more lucky next time.”

The Sounders may look like a team poised to turn around the worst season in club history.  For Valdez, the hot seat will only get hotter until he has a major breakthrough.