A 37-yard pass from QB Trevone Boykin to WR Tanner McEvoy with no time left, then a two-point conversion, allowed the Seahawks to escape Kansas City with an improbable 17-16 win in the preseason opener. 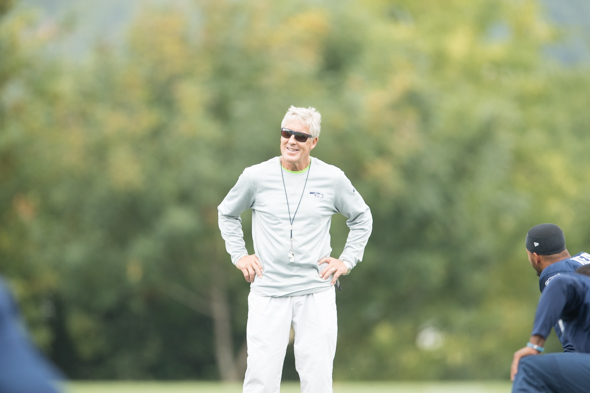 The Seahawks launched the 2016 preseason with a face mask penalty on the opening kickoff, but ended the opener with a Hail Mary touchdown pass and a two-point conversion with no time remaining to stun the Kansas City Chiefs 17-16 Saturday afternoon at Arrowhead Stadium (box). In no way did the outcome seem remotely possible.

Then, with 67 ticks left and defeat imminent, Boykin orchestrated an out-of-nowhere 88-yard drive in four plays that ended with a 37-yard TD pass to Tanner McEvoy, a 6-foot-6 undrafted rookie from Wisconsin.

Boykin play No. 1: From the Seattle 12, deep middle pass to rookie FA wide receiver Montario Hunter (pride of Elizabeth City State) for 18 yards and a first down.

After that jaw-dropper left them down 16-15, the Seahawks went for two, helped by  a penalty on the Chiefs for 12 men on the field. Troymaine Pope, a 5-foot-8 running back out of Jacksonville State, rushed for the conversion and the victory.

“How amazing is that?” asked RB Christine Michael. “That’s crazy. That was great play by the quarterback. Amazing win, amazing win.”

Said head coach Pete Carroll, “It took us a long time to get going, but we’re really thrilled to see our guys come through and get the job done.”

Except for the first series with Wilson, the Seahawks used Boykin and former Skyline High School star Jake Heaps at quarterback. Boykin played almost all of the first half and all but six minutes of the third quarter before yielding to Heaps. Boykin then returned for the final thre possessions and sparked the Seahawks.

The Chiefs got a one-yard TD run on the opening drive from former Seahawks RB Spencer Ware and three field goals, including a 58-yarder, from Cairo Santos. Steven Hauschka’s three field goals came from 49, 52, and 50 yards, setting the stage for Boykin.

Most of Seattle’s starters, save for the rebuilt offensive line, were gone by early in the second quarter as Carroll spent the day evaluating a multitude of young players and trying to sort out positions of concern.

Wilson opened by hitting WR Doug Baldwin with a pair of slants covering 12 and 13 yards and picked up a big red-zone first down with a sideline toss to WR Tyler Lockett. But he was picked off at the goal line by former Washington Huskies CB Marcus Peters while trying to hit WR Jermaine Kearse. That ended Wilson’s day.

Boykin completed his first pass, to WR Paul Richardson, and went on to hit on 16 of 26 for 188 yards. Boykin didn’t throw an INT and led every scoring drive, demonstrating a knack for getting rid of the ball while flashing Wilson-like athleticism.

Heaps also completed his first pass, a 9-yarder to Nwachukwu, and finished 3-for-10 for 33 yards. In the battle to replace Tarvaris Jackson, Boykin gained a clear edge.

In the absence of not-quite-ready RB Thomas Rawls, who did not make the trip to Kansas City, Michael started and a made a strong showing, gaining 44 yards on seven carries. He consistently broke first contact and had runs of 9, 16, 9 and 8 yards.

George Farmer, a former WR/DB moved this past week to running back so he could audition for a role as a third-down back, had seven carries and produced 15 yards. Pope had 10 yards on two carries. Alex Collins, the fifth-round pick from Arkansas, figured to get more touches, but carried three times for five yards.

With new C Justin Britt serving as anchor, Seattle’s line, which played most of the first 30 minutes, did not allow a sack on nine passing plays and helped generate 59 rushing yards. The only clear stumble: a holding call on No. 1 pick Germain Ifedi that scotched a potential scoring drive.

“Our offensive line gave us an opportunity to throw the ball,” said Baldwin. “They went in there and did a great job. They were ready.”

Bradley Sowell, a free agent signee who spent the last three years at Arizona where he started 12 games in 2013 and then spent the last two years as a reserve, received the start at left tackle with J’Marcus Webb injured and Garry Gilliam moving to the right side.

“I thought our offensive line did great. We moved the ball really well while I was in there,” said Wilson.

“The first group did a really great job of driving the ball,” added Carroll. “Our offensive line played like 25 plays and they were very solid. We are just trying to get as solid as we can.”

CB Tyvis Powell, an undrafted rookie from Ohio State nailed for pass interference in the second quarter, in the fourth had Seattle’s only interception.

The first kickoff ended with a face mask penalty on Seattle special-teamer Steven Terrell that set up KC on the Seattle 49 for what became its only touchdown drive . . . The Seahawks had nine penalties for 86 . . . The Seahawks gained 358 yards Kansas City’s 329 . . . DE Michael Bennett and SS Kam Chancellor attended but didn’t play, getting a game off  . . . The Seahawks are 16-9 in preseason games under Carroll. They went 2-2 last year.

The Seahawks play the Minnesota Vikings at CenturyLink Field Thursday at 7 p.m (FOX). The teams last met in January in an NFC wild card game in Minneapolis, where Seattle won 10-9 with the temperature at -6 degrees.