Nicolas Lodeiro continued to impress for the Sounders in a win over Real Salt Lake Sunday. The 27-year-old was the centerpiece of Seattle’s revitalized midfield in a 2-1 win. 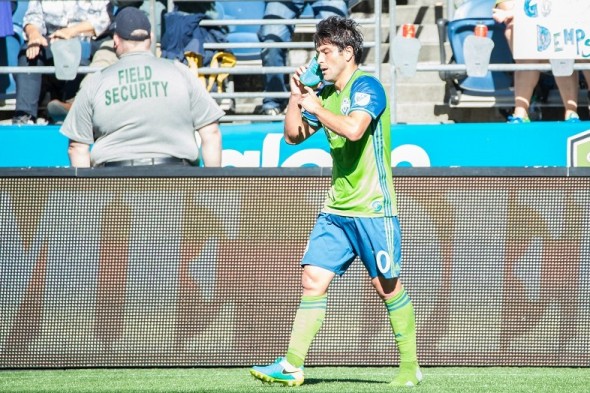 Nicolas Lodeiro celebrated his first goal as a Sounder by pretending to use his shoe as a phone, in a tribute to his father. / Charis Wilson, Seattle Sounders FC

Despite conceding a bizarre goal in the second half, the Seattle Sounders managed a hard-won victory in front of 39,491 at CenturyLink Field Sunday, downing Real Salt Lake 2-1. Nicolas Lodeiro, Seattle’s newest designated player, scored his first goal and assisted on another to help Seattle remain unbeaten since he joined the club July 27.

Seattle (8-12-3) came out in the same formation used in a road win against Orlando City — a rare consistency of personnel that the club has seldom enjoyed this season.

Starting from the opening kickoff with the same flying pace and pinball-like passing used at the end of the Orlando match, the Sounders ran most of the action through Lodeiro. He finished with a game-high 100 touches and a team-high 70 passes.

Interim head coach Brian Schmetzer, promoted from assistant coach after Sigi Schmid’s ouster the day before Lodeiro joined, couldn’t put his finger on what was different about the team’s attitude.

“I think that the team needed something,” Schmetzer said. “Whether it was a change, whether it was same coach different message, whether they just have themselves figured out . . . you saw their body language after the game, they were tired.

“I’m not so certain it was one certain thing, but I do believe that it’s their group mentality that makes them play the way they’re playing now.”

While the origin of the attitude adjustment may elude Schmetzer, the change in play brought by Lodeiro’s role in the midfield was plain to see. The Uruguayan distorted Real Salt Lake’s back line with an array of runs, threaded passes and ankle-breaking jukes.

Lodeiro’s play opened up space for his teammates, too. Clint Dempsey and Jordan Morris, often closely marked prior to Lodeiro’s arrival, found space in which to run and chase passes from their new teammate. Play on the wings also opened up, as Lodeiro often led Tyrone Mears and Andreas Ivanschitz into space as he held off defenders.

“He plays right wing and did everything from the left side of the field,” Cassar said. “It’s definitely team defending when it comes to him because you can’t have someone follow him all over the field. Listen, he’s top class, and today was a difference-maker. At the end of the day, DPs are supposed to be difference makers.”

Cassar also noted a difference in Seattle’s energy compared to the team that his side defeated 2-1 in March.

“I’m not sure exactly what is going on in their locker room, but I think it’s a mentality,” Cassar said. “You can see a more aggressive team from the front to the back. Obviously, they’ve got a bit of spirit about them right now, and they’re at home.”

Seattle cashed in on the aggressive attitude in the 24th minute, when Clint Dempsey played a wide ball into the left alley for Andreas Ivanschitz, who sent a lateral pass on the ground to Lodeiro. He fired a left-footed first touch shot across his body, off the crossbar, and into the back of the net for his first goal as a Sounder.

After he scored, Lodeiro pulled off his shoe, holding it up to his ear as if it were a phone. After the game, Lodeiro explained through an interpreter that the act is his way of paying tribute to his father, who he used to call after every game when his father was unable to attend.

Lodeiro set up Seattle’s second goal in the 37th minute, when he swung in a pinpoint cross from the left side to find Jordan Morris as the rookie forward slipped behind Demar Philips to head home his team-best eighth goal.

Real Salt Lake (10-8-7) pulled within a goal in the 62nd minute, through circus-like circumstances. GK Stefan Frei picked up the ball in the box as Yura Movsisyan applied pressure. Frei stepped past Movsisyan and went to roll the ball to the left, only to have Movsisyan stick a foot in the way and trap Frei’s roll. The Armenian forward held off the retreating defenders just long enough to knock the ball to Joao Plata, who converted into a mostly empty net to provide the game with some tension.

Frei’s self-assessment of the moment was blunt.

“It was a bone-headed move,” Frei admitted. “It’s too risky to try to throw such a tight ball. He seems disinterested, isn’t really facing it, and then he sticks his leg out and gets it. Bone-headed on my part, but I’m really happy that we were able to still get the win.”

From there, Seattle had to drop back as RSL found space and time to counter and batter the midfield. The Sounders had a chance to put the game away in the 81st minute, when Cristian Roldan drew a penalty kick, but Dempsey smashed the shot off the crossbar and it bounced away.

When the final whistle went, Seattle was bruised but victorious, clinging to three needed points to inch its way up the table into a playoff spot.

Schmetzer said there was no added emotional value to a hard-won game.

“They’re already mentally tough enough, so a win is a win,” he said. “I don’t think we need any reality checks any more at this point.”

It is rare for the arrival of one player to ignite a transformation for a team sport. But Lodeiro’s arrival, combined with the new attitude in the locker room under Schmetzer, seems to have Seattle poised to make a run.

The road ahead may be fraught with pitfalls, but with Lodeiro’s agility and a new team-wide confidence, the Sounders might dodge their way to safety.