Former Seahawks safety Kenny Easley was named as a senior finalist for induction into the Pro Football Hall of Fame. His HOF candidacy will be debated in February during Super Bowl week. 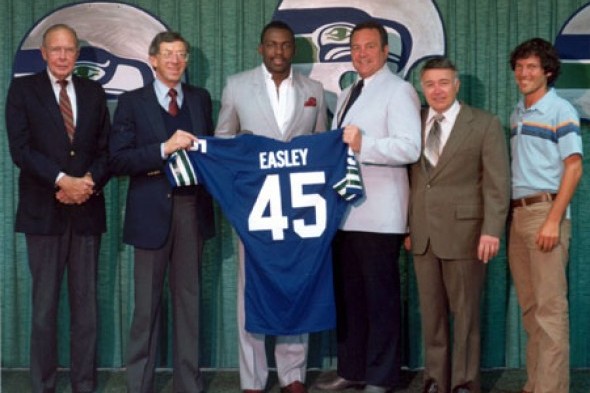 The Pro Football Hall of Fame Monday disclosed that former Seahawks safety Kenny Easley, a big banger with elite ball-hawking skills — sort of a hybrid of Kam Chancellor and Earl Thomas — whose NFL career (1981-87) was cut short by medical issues, has been selected as a senior finalist for induction into Canton.

In order to qualify, Easley must receive 80 percent of the vote when the Hall of Fame Selection Committee meets Feb. 4, 2017 in Houston.

The Seahawks selected Easley with the No. 4 overall pick in the 1981 draft out of  UCLA, where he was a four-time, first-team All-Pac-10 pick and a three-time consensus All-America selection. He became AFC Rookie of the Year after recording 107 tackles and three interceptions, one of which he returned a career-long 82 yards for a touchdown.

The AFC’s Defensive Player of the Year in 1983, Easley hit his peak in 1984 when he was named NFL Defensive Player of the Year (only the second safety so honored, following Miami’s Dick Anderson in 1973), posting 75 tackles, three forced fumbles, and 10 interceptions, tying the franchise record set by John Harris in 1981 (the record still stands).

Easley was a four-time All-Pro selection and made five Pro Bowls in seven years, all with the Seahawks.

The Seahawks traded Easley to Arizona in 1988 for quarterback Kelly Stouffer, after which Easley was diagnosed with kidney disease while taking the Cardinals’ physical exam. In April 1989, Easley sued the Seahawks in King County Superior Court, alleging that his kidneys were ruined by large doses Advil, a pain reliever, that he took under team supervision while recovering from ankle surgery in 1986. He began immediate dialysis three times a week.

Easley underwent a kidney transplant in June 1990 shortly after his court claims against the team were dismissed and shifted to a workman’s compensation claim.

Easley and the Seahawks remained estranged for many years, but ultimately settled their differences. On Oct. 14, 2002, Easley became the sixth player inducted into the team’s Ring of Honor. That followed his 1991 induction into the College Football Foundation Hall of Fame and UCLA’s Athletic Hall of Fame, both in 1991. He was also named to the NFL’s All Decade Team for the 1980s.

Easley, 57, has had a variety of medical issues. He underwent hip replacement surgery a few years ago and, this summer, had triple bypass surgery.