One of the Seahawks’ most controversial offseaso decisions was to move Justin Britt to center, his third position in three seasons. But against a good nose tackle in Kansas City, Britt held up. 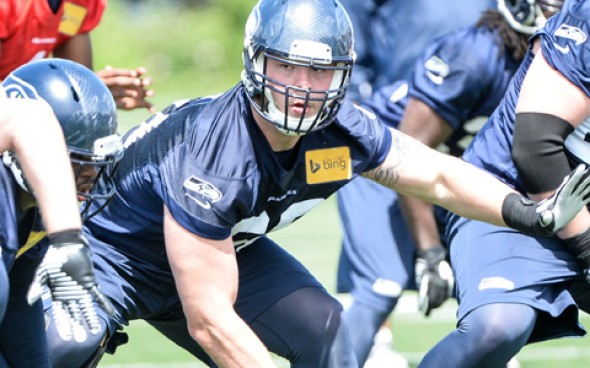 RENTON — Certainly the first preseason game Saturday was a massive disappointment for those expecting the Seahawks offensive line to work like one of the welded-together junk vehicles that blow out early in the Mad Max films. But for those who have faith in Tom Cable’s mantra, borrowed from the Statue of Liberty, “Give me your tired, your poor your huddled masses . . . ,” things went OK in KC.

“I was really pleased with the tempo with such a new group in the line,” said Justin Britt, whose view from center was fairly close up. “Not only (the first unit), but the twos and threes, the tempo was what we strived for.

“We can be  couple seconds faster. But for first game together, it felt really good. We stayed on schedule.”

Some observers will point to the fact that the Chiefs’ first-team defense did not play five regulars. It is also true that the Seattle offense did not score a touchdown until after the scoreboard clock read 00:00.

But if the first-game goal was to avoid an unseemly spit-up in public, mission accomplished.

“I wasn’t concerned about much of anything,” Britt said after practice Monday. “Things went pretty smooth for the 20-some plays I had.”

After watching film of the offensive line in the 17-16 triumph over the Chiefs that wasn’t over when it was over, coach Pete Carroll Monday agreed with Britt, gushing as only he can gush after watching his No. 1 unit for half of a first preseason game.

“I really liked it,” he said. “I thought we were tight in our pass protection. We really hit some runs against a really nice front. The best evaluation was our ones against their ones. That gave us a really good feel.”

Regarding Britt, who went up against 350-pound nose tackle Dontari Poe, a two-time Pro Bowl selection, Carroll opened up the hose.

“I thought Poe is a terrific nose tackle and Justin held up very well, ” he said. “They battled in a number of situations. I was really fired up about that. I felt like Justin really made the transition and that’s because we respect Poe.

“Overall, the group was solid, we communicated well, first time on the road, I’m pleased with that.”

In the Seahawks’ rather haphazard approach to filling the void at center created by the trade of Max Unger to New Orleans for TE Jimmy Graham, they tried Drew Nowak, Lem Jeanpierre and Patrick Lewis at center, with largely dubious results. Lewis held up the best, but he now finds himself behind Britt, the former tackle and guard now on his third position in three Seahawks seasons.

The switch to center was probably the boldest call among the changes that have installed new players at all five positions at training camp, which by definition ties an NFL record, should any such accounting be kept. Britt’s first two seasons were generally regarded as a below average, certainly for a second-round draft choice.

Justin Britt, the Seahawks’ starting LG, who allowed the knockdown on Wilson’s interception against Carolina, is not of NFL caliber. He ended the year as our 74th-overall OG, with a measly 37.0 grade in pass protection. In two years, Britt has allowed eight sacks, 14 hits, and 71 pressures.

So the move to center was controversial. But Carroll and Cable, the line’s coach, figured they had a play left with Britt’s career. The early sign is promising.

“As the coaches always say, it’s kinda my show, me and Russell Wilson,” Britt said, “as long as he and I are on the same page and I communicate with the other four linemen. Right or wrong, the job will still get done. Russell shouldn’t have to take hits in the passing game.”

On the first possession, the line helped take the offense 61 yards in nine plays to a first down at the Chiefs 14. But Wilson misfired on a pass at the goal line to Kearse. Wilson took responsibility for the interception.

The first unit also picked up a field goal before mostly calling it day. The one major error was a holding call on Poe by rookie RG Germain Ifedi. Britt said all the preparation for his first pro game as a center worked well.

“It was good,” he said. “I feel like I played enough to get confidence in my ability. I trust the coaches, staff and players around me to prepare me well. Obviously, there will be technique things as I gain reps at center. Overall, I feel like we communicated well.”

Britt is not naive to the difficulty in playing the most taxing line position. But he also brings some advantage.

“Going into our year three together, I’ve played in three different spots,” he said. “Russell has only become smarter every year in understanding the line’s job. I don’t know about other QBs in the the league, but he has to be among the smartest.

“I understand the game and this offense. It’s a different world at center, a different perspective. I’m so used to getting the calls, now I’m giving them. But I just have to be aware and see more. I think it helps me a lot, being a smarter player.”

The game ever keeps its participants humble.

Eager to shore up depth, the Seahawks reached into their recent past again. This time, they signed free agent DT Tony McDaniel, who was cut a year ago in a salary cap move. McDaniel played last year at Tampa, where he started three games and had a sack and 13 tackles. He played in every game with Seattle in 2013 and 2014.

McDaniel, 31, is 6-foot-7 and 305 pounds and will back up the interior line. The Seahawks had hoped the spot would be filled by Sealver Siliga, but two separate calf injuries have kept him from getting on the field at camp.

“It’s been a debilitating injury for him,” Carroll said Monday. “Just really hurt his chances of breaking in and helping us. It’s going to be a really hard comeback for him when he gets back to us.’’