Up 20 pounds from last year, University of Washington star Budda Baker looks to be an All-America-caliber player on another dominant Washington defense. 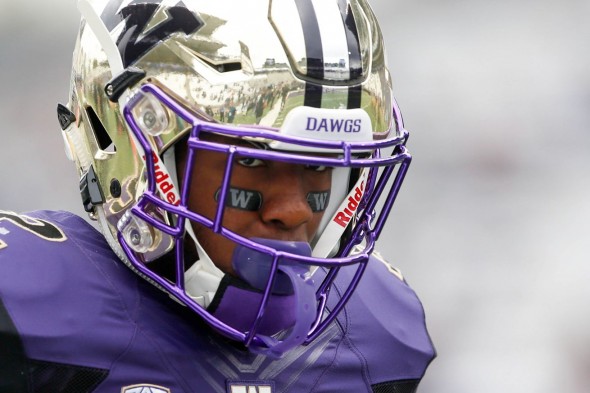 Junior safety Budda Baker is back for the Huskies — bigger, stronger, and looking to help the University of Washington continue its recent tradition of providing the Pac-12 Conference’s most annoying defense.

Entering fall camp, Baker, a Seattle-area native who played his high school ball for the Bellevue Wolverines, made a 20-pound weight gain from the end of last season. When he stepped on the scale before practice Tuesday, he was 191 pounds.

The recipe was simple.

“A lot of meat and vegetables,” Baker said Tuesday. “I’m trying to stay away from the candy and all that. It helped me a lot. I hate vegetables, so any time I had to eat a vegetable, I gagged a little bit.”

Which green foe became the most tolerable?

“I settled on broccoli, it was easier to swallow with a glass of water,” Baker said.

Those who question whether Baker has lost a step due to his new bulk, can be reassured by the safety’s numbers at Washington’s spring combine. Baker, then 185, ran a hand-timed 4.35-second 40-yard dash, as well as a 4.08-second pro agility shuttle. Both times were second-fastest on the team.

If doubt lingered, Baker’s constant first-place finishes in team conditioning drills seem to back up the data. Many have noticed — he’s a consensus first-team All-America selection among numerous preseason forecasts.

Baker thrives on competition, a trait that helped him accept his increased vegetable intake. According to teammate and senior DB Kevin King, the drive doesn’t stop on the field.

“He’s a pretty good ping-pong player,” King said. “We play all the time. I beat him every now and then, but he competes in everything he does. He’ll go and shower and run upstairs to play somebody at ping-pong, best out of five. They’ll come down sweating. You want that kind of competitor on your team.

“We compete in everything — see who can tell the best jokes, we race a lot, playing video games. We have a lot of fun. That’s something I like a lot about (the defensive backs).”

The competition shines through during practice. Simulated drives pitting offense against defense routinely feature no end of trash talk and high-energy celebrations. If a team is penalized (and it is usually against the defense when coach Chris Petersen throws a flag), the decision is met with a chorus of boos from players and position coaches.

“Yeah, we call that adversity,” Baker said with a smile. “A lot of things might happen, but at the end of the day you can’t complain about it. You’ve got to get ready. We love to compete with them, they love to compete with us. We just try to act like it’s game day and we’re just studying University of Washington offense.”

His other big area for improvement in 2016 is the speed with which he reads the game.

“I’m trying to get smarter as the game goes on, watch a lot of film,” Baker said. “The smarter you are on the field, the more opportunities you get to make plays.”

An All-Pac-12 first-team selection in 2015, Baker plans to spend the season trying to push his teammates to excel, rather than being a leader in the traditional sense.

“I’m just looking to help,” Baker said. “We don’t really think about leaders, so we’re trying to help each other get better. If I mess up, they get on me. If they mess up, I get on them. We put our egos aside and just get ready to learn.”

“We have the respect as seniors, but I like to listen to Budda, I listen to (the other DBs),” King said. “We have a lot of camaraderie as a DB unit. We all can tell each other the same things, we all get the same respect. When you have that kind of chemistry, the sky is the limit.”

The Huskies have two weeks until their Sept. 3 home opener against Rutgers (11 a.m., Pac-12 Networks). When game day comes, Baker said he hopes the Huskies decide to kick first. He wants the defense to start the year.

If he continues to clean his plate as well as the clocks of Pac-12 offenses, the defense will again finish the year atop the conference.