John Stanton’s arrival as Mariners owner — the first local guy to run the club since the 1970s — offers some prospect for roster upgrades before the Aug. 30 deadline. 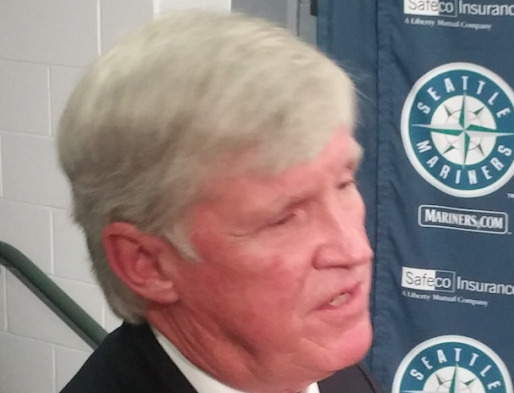 John Stanton is the first local resident to own the Mariners since a group bought the expansion club in 1977. / Art Thiel, Sportspress Northwwest

The move doesn’t have the emotional impact of, say, Kyle Seager’s game-saving defensive play Wednesday in Anaheim. But the Mariners’ most significant maneuver in more than two decades was approved Thursday by a vote of MLB owners: The sale of controlling interest of the franchise to a group led by John Stanton — the first local resident to own the Mariners since the original owners of the 1977 expansion club.

The proposed purchase, which assessed the franchise’s value at $1.4 billion — the most recent sale in 1992: $100 million — was announced in April when Stanton, who came to wealth in the wireless industry, and 16 others who also were part of the minority ownership, agreed to buy out all but 10 percent of the shares of Redmond video-game giant Nintendo of America.

The approval, expected because Stanton was already known in baseball circles, came at a regularly scheduled meeting of owners in Houston. MLB Commissioner Rob Manfred said the deal will close Friday or Monday, the Associated Press reported.

Hiroshi Yamauchi,  founder of NOA’s parent, Nintendo of Japan, bought the club from Jeff Smulyan as a favor to then-Sen. Slade Gorton, a deal that stirred great controversy at the time because it was the first purchase of an MLB club by a foreign national. But the deal was approved in part because of the presence of local U.S. partners who were said at the time to have first-refusal rights in the event Yamauchi/NOA sold the team.

That appears to be what happened.

Stanton, 60, joined the group in 2000 when he bought out the 10 percent ownership stake of John McCaw of McCaw Cellular, where Stanton once was a senior executive. He now leads a group that includes Chris Larson, a retired Microsoft executive who played a major role in the design of Safeco Field, and nearly all the others in the 1992 group, one of the longest-tenured ownerships in MLB.

Stanton’s group cashed out NOA’s 55 percent share for about $640 million, done primarily out of passion for baseball, something that could not be said for Yamauchi, who in 21 years never saw the Mariners play in person.

The absentee owner’s representative on the team’s board of directors, corporate attorney and club CEO Howard Lincoln, had no background in baseball or sports. He operated the club largely as a business asset of his friend and boss, Yamauchi, who died in 2013. For estate purposes, Yamauchi in 2004 named NOA as the successor owner.

Absenteeism will not be the case for Stanton, Bellevue-born and a Whitman College graduate who remembers as a boy crying over the 1970 departure of the Seattle Pilots to Milwaukee. He has said that owning the Mariners would be “perhaps the supreme honor for me in my career.”

Besides his 15-year share of the Mariners, Stanton has invested in two teams in the West Coast League senior collegiate summer circuit, and is part of the group that owns the Mariners’ AAA club in Tacoma. He’s been active for years in youth baseball.

The cynicism that hangs over the franchise like an acid fog — four playoff appearances in 40 years, none since 2001 — is felt by Stanton in the same manner as hard-core fans. Which explains why he was so bold at his the press conference announcing the deal.

“I think it’s time we have that accomplishment.’’

In April, that was a nice sentiment. In August, after 10 wins in 12 games entering Thursday night’s game in Anaheim, there is a chance to act.

Despite making no major moves at the non-waiver trade deadline July 31, general manager Jerry Dipoto made several smaller deals that have patched together a pitching staff helping the Mariners wobble into post-season contention, two games out of the second wild-card berth.

But slogging through emergency starters and AAA call-ups while waiting for young starters James Paxton and Taijuan Walker to deliver is a perilous existence. A little lost after Wednesday’s spectacular save of the 4-3 win by Seager was that the Mariners needed five relievers to succeed spot starter Cody Martin. That is no way to go through many of the remaining 40-plus games.

To fill in behind Felix Hernandez and Hisashi Iwakuma, the Mariners are in desperate need of a quality veteran starter. Teams are passing such talent through waivers until the Aug. 30 deadline.

The cost in prospects can be high for what is likely to be a rent-a-pitcher. Then again, the Mariners have won 12 games after trailing by three or more runs, the most in baseball. That suggests in part an inordinate capacity for winning with a single swing of the bat.

That is a rare virtue that may not reappear anytime soon, and would be a shame to squander.

Authorizing Dipoto to armor up with a quality pitcher would be a remarkable way for a local boy to make good on his aspiration.