Thiel: Too much sacktime for Seahawks’ Wilson

The Seahawks lost 18-11 to the Vikings Thursday, thanks in part to Trevone Boykin emulating his QB mentor, Russell Wilson, too closely when it came to taking unnecessary sacks. 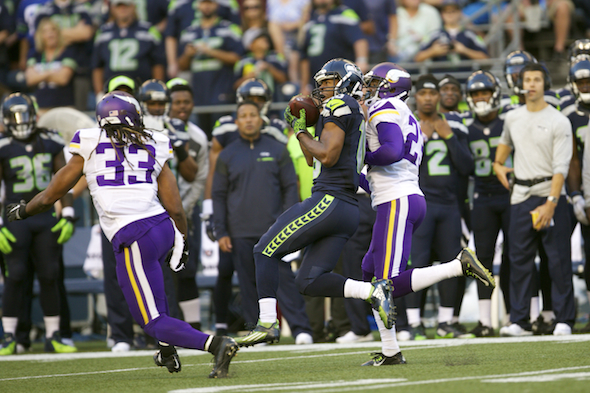 We’d like to offer up a genuine quarterback controversy. It’s been years since Hasselbeck/Dilfer, and the Seahawks preseason needs drama. So here we go: TD drives led so far — Trevone Boykin 2, Russell Wilson 0.

Unfortunately, the market for that controversy is slim, although judging by the presidential campaign, false narratives are not without support in this country.

In the case of sports, however, numbers don’t lie. The truth Thursday night at the Clink was that the No. 1 offensive line permitted Wilson to be sacked four times in a first half in which the Seahawks were held scoreless.

So what we have is the more traditional Seahawks controversy: The O-line is taking on copious amounts of water in pass protection. Again.

But in the wake of the 18-11 loss to the Minnesota Vikings, coach Pete Carroll wished to take pressure off his beleaguered linemen by saying it was Wilson who on at least two occasions needed to unload the ball instead of absorbing the drive-killing sacks.

“The sacks made it really hard to get going, but Russ can do a better job to help us there,” Carroll said. “Plays like that don’t let players express all the hard work they’ve done. Sometimes players try to make bigger plays. But the ball needs to get out quickly. When you don’t, you suffer negative stuff.”

The negative stuff included a mere 106 yards in total offense at halftime, thanks in part to 41 yards lost in the sacks. Throw in 56 yards in  penalties, and it was remarkable that the Seahawks were not as far below zero as the temperature in Minneapolis when the teams met in a January playoff game.

Wilson completed just five of 11 passes, but was more accurate with his degree of responsibility.

“The first two sacks, they were kind of coverage sacks, (the Vikings) did a good job,” he said. “The other two I take the blame for.”

Given that Wilson in the first preseason game in Kansas City ended his lone drive with a goal-line interception, it’s fair to say he’s off to a slow exhibition-season start.

It’s also fair to say his backup, rookie Boykin, is off to a wild start. He led the Seahawks to their only touchdown early in the fourth quarter, a seven-play, 65-yard effort finished by rookie RB Troymaine Pope from four yards out. On a rollout option, Boykin supplied the two-point conversion with a spectacular leaping dive at the pylon.

But Boykin gave back the game-winner, a 53-yard pick-six to CB Marcus Sherels with 1:23 left.

Running with second- and third-unit players, Boykin took the Seahawks’ final possession and reached the Minnesota 5-yard with a first-and-goal and 25 seconds left, invoking the memory of his game-winning theatrics in Kansas City.

But after an incompletion, Boykin made the same mistake as Wilson — he tried to do too much. Under a heavy blitz, he failed to throw the ball away and took a 10-yard sack. A final pass play at 00:00 this time wasn’t close.

Boykin was as accountable as Wilson.

“The sack was just something we can’t give up,” he said. “I just have to know the situation, where we’re at on the field, what we need to win and what we have to do.

“I can’t take that sack there that’s totally on me, that’s my fault.”

Nothing dismays Carroll more than self-destruction.

“We should have won the game,” Carroll said. “We were going to do it at the end again and it was going to be really fun.”

That might have happened if they had run the ball more. Spotty as was pass protection, the line blew holes in the Vikings’ vaunted front for most of the game. Seattle rushed for 187 yards, including 56 on 10 carries in another good showing by RB Christine Michael. The leader was Troymaine Pope, an undrafted rookie free agent from Jacksonville State, who had 86 yards in 10 carries.

The defense came back from a sloppy first half — several regulars sat out or played minimally — to allow just 58 yards of offense. The Seahawks benefited from the game-long absence of starting QB Teddy Bridgewater — or he benefited from avoiding a mauling for the third time in 10 months from the same guys — as well as another shanked field goal from Blair Walsh, the goat of the 10-9 playoff loss after missing the game-winner in the final seconds.

Second-year DT Frank Clark was all over the Vikings, including a sack, a tackle for loss and and a batted pass, and rookie second-rounder DT Jarran Reed look like he had a fair impression going of Brandon Mebane.

Nothing about the outcome should register as a big deal for the season. But it would improve the Seahawks’ August disposition if, against Dallas Thursday, Wilson takes it upon himself to roll down the Clink field as if he’s been there a time or two, just to avoid bringing up the ghost of Trent Dilfer.