With both teams on uncertain ground, Sunday’s full-house Sounders-Timbers match at the Clink may determine much about each team’s playoff fate. 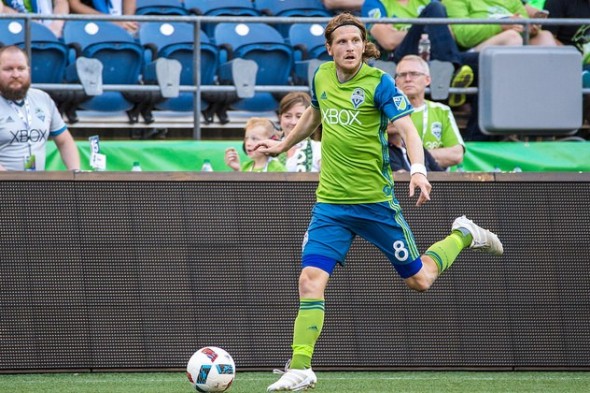 Midfielder Erik Friberg needs no reminder about the importance of games against the Portland Timbers. / Charis Wilson, Seattle Sounders FC

It’s that time of year. The time when more than 50,000 people wearing shades of green pack CenturyLink Field to the brim and shout at one another for a couple of hours.

The Seattle Sounders host the Portland Timbers in a full stadium match Sunday (6:30 p.m., FS1). On the line are bragging rights and crucial points the teams need as they enter a 10-plus game skirmish over a playoff berth.

Portland (8-9-8) has stumbled somewhat in its MLS title defense, entering the weekend winless on the road. Despite the struggles, a stronger home mark has them perched above the red line with a one-point lead over the seventh-place San Jose Earthquakes.

Five points back and three spots lower sit the Sounders (8-12-3), unbeaten in their last three since the addition of midfielder and designated player Nicolas Lodeiro and the ouster of head coach Sigi Schmid.

A win for either side does a world of good at the expense of the bitter rival and Cascadian foe.

Interim head coach Brian Schmetzer, who played for the NASL Sounders from 1980 until the club folded in 1983, was one of the original witnesses to the birth of the rivalry.

It has special significance for him, from his time playing and his time as coach of the USL Sounders before joining the MLS franchise as Schmid’s primary assistant.

“It’s a regional rivalry between cities, between soccer teams, between fans, between players,” Schmetzer said. “There’s a lot of depth. I remember going down and playing reserve matches in Civic Stadium, coaching there with the USL guys. I’ve been through a lot of those. It’s a really good rivalry. All the guys get up for it.”

Swedish midfielder Erik Friberg, who played for the Sounders in 2011 before leaving to play in Europe, needed no reminder about the intensity of the rivalry when he returned last season.

“From the beginning, it was the biggest game of the year for everyone, the players and the fans,” Friberg said. “You need to win these games, it doesn’t matter how you look, if you play good or bad. It’s the result. Those were the games that I missed when I was over in Europe. I missed the games against the Timbers.”

Friberg found a way to get his fix while overseas, often staying up late to see the Sounders play. Timbers games were the most exhilarating.

The rivalry has a new edge this season, with Portland becoming the first of the clubs to claim the MLS Cup. Sunday will be the Timbers’ first visit since winning the title. Seattle is eager to reassert itself after a 3-1 loss in the Rose City July 17.

If Seattle wins, it could jump the Timbers in the standings with a win in a midweek game at Houston Wednesday (6 p.m., JoeTV), before the final regular-season meeting between the clubs in Portland Aug. 28.

If the Timbers win, they will strike the toughest psychological blow against their reeling rivals, who seek to make the playoffs for the eighth consecutive year.