The long hitting rehab that C Mike Zunino, Seattle’s first-round pick in 2012, underwent last season and this season at AAA Tacoma seems to have worked. 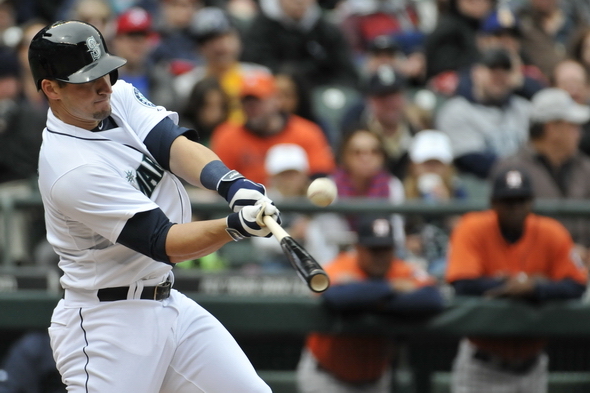 The Michael Pineda-for-Jesus Montero absurdity that then-general manager Jack Zduriencik made with the New York Yankees in 2012 seems to have an unmistakable verdict: The Mariners were hosed. It wasn’t the first time they had such an indignity, one of many reasons why Jerry Dipoto replaced Zduriencik in September.

While the often-injured Pineda, who pitches for New York Monday night at Safeco Field in the opening game of a three-game set against the Mariners, hasn’t been nearly the stud the Yankees had hoped (23-25, 4.05 over three seasons), at least he hasn’t been the drag that Montero and pitcher Hector Noesi were in Seattle.

A catcher upon arrival, Montero couldn’t play the position. He drew a 50-game suspension for his involvement in the Biogenesis scandal. He had difficulty staying in shape. He infamously brandished a bat at one of the club’s roving instructors during an argument in a minor league game.

Despite Montero’s moderate success at AAA Tacoma, the Mariners cut him loose in March (he is with AAA Buffalo in the Toronto organization).

Noesi went 2-14, 6.13 in 36 games (19 starts) in three seasons with the Mariners, who unloaded him on the Rangers in April 2014. Noesi hasn’t pitched in the majors since 2015 and is now with Kia in the Korean Baseball Organization.

If that had been the extent of the blow to the Mariners, it would have been bad enough. But it wasn’t. Mike Zunino, the club’s No. 1 pick in the 2012 amateur draft, sustained such extensive collateral damage that it nearly ruined his career.

Due to Montero’s failures and no suitable in-house options, Zduriencik rushed Zunino to the major leagues  — and kept him there — only a year after they selected him out of the University of Florida. By 2014, Zunino was Seattle’s everyday catcher, starting 131 games. But without the benefit of enough minor league at-bats, he hit .199 and could do little more at the plate except strike out and hit the occasional home run.

Last year, Zunino nearly played himself out of the organization. He batted a woeful .174 in 112 games before the Mariners exiled him to the minors. For perspective on that .174, these are the seasons of the worst-hitting catchers since 1900 who played at least 100 games:

Zunino’s ineffectiveness sent Dipoto to the free-agent market, where he plucked Chris Iannetta. Dipoto also traded Mark Trumbo to the Orioles for now-injured backup catcher Steve Clevenger (Trumbo has 35 home runs this season), giving Zunino an opportunity to regain his confidence and develop something resembling a consistent stroke in the minors.

“We’re sending him there (Tacoma) to see what we’ve got,” Dipoto said at the outset of spring training.

Zunino played for the Rainiers until early July when the Mariners recalled him. He smacked two home runs in two games but was optioned back to Tacoma. On July 20, the Mariners summoned him again, apparently confident that his .286 batting average and 57 RBIs in 79 games with the Rainiers showed consistency. A prolonged slump by Iannetta greased the decision.

“We’re going to give Mike a chance to play,” manager Scott Servais told reporters after Zunino’s second recall. “This is about Mike Zunino and putting him in a good spot. Keeping him going. We’ve got to find out what we’ve got.

“We took the steps backward. He went to AAA. He made adjustments in his approach. How is it going to play at the big-league level? The only way to find that out is to play him. We’ll find out.”

To their delight, the Mariners are finding out. Zunino hasn’t been entirely salvaged yet, but has demonstrated upside. The primary catcher since recall, Zunino hit homers in back-to-back games Aug. 2-3. He delivered the game-winning sacrifice fly Aug. 9 in the 15th inning against Detroit.

In his first 27 appearances (21 starts), Zunino hit .282 with 13 of his 20 hits (five doubles, eight homers) going for extra bases. And Zunino is on a long on-base streak, one that has reached 17 consecutive games. This is not only the longest streak of Zunino’s career, but tied for the third-longest streak by a Mariners catcher.

“I really like where Mike is at right now,” Servais told reporters the other day. “The confidence is growing, and that’s what we tried to create this year — to get him back in a good spot mentally and physically.”

Zunino had perhaps his best game Saturday night (he didn’t play in Sunday’s loss to Milwaukee): a solo homer to left (436 feet) in the seventh inning and a two-run double to center in the eighth for a season-high tying three RBIs. With 13 RBIs during his 17-game on-base streak, the hitting rehab Zunino underwent in Tacoma seems to be working. Great move by Dipoto.

RHP Cody Martin (1-2, 3.13) will throw for Seattle at 7:10 p.m. Monday opposite Pineda (6-10, 4.89), who threw five scoreless innings his last time out and holds a 3.18 ERA in three August starts. The 26-year-old Martin, a Gonzaga University grad, gets his second spot start after giving up two runs on seven hits in 4.1 innings in a 4-3 win vs. the Angels l Wednesday. Martin pitched in relief in two prior stints with the club.