Leading 6-3 entering the ninth inning over a lame Milwaukee team, the Mariners offed themselves by giving up four runs en route to a 7-6 defeat at Safeco Field. 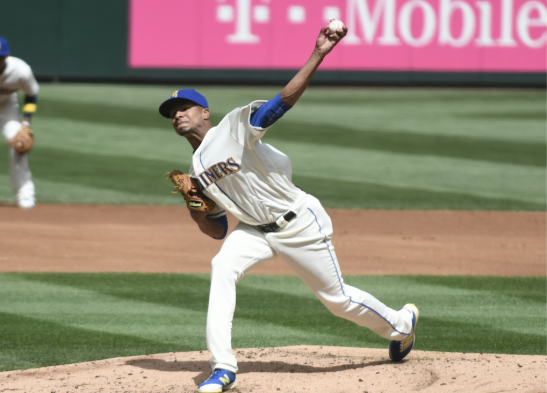 Wandering among the archives of ghastly Mariners losses is a bleak, fruitless exercise. Best to avoid comparisons and put the one Sunday into an unmarked box and mis-locate it in a vast warehouse, as in Raiders of the Lost Ark.

But over the final 39 games of the regular season, its recollection actually could serve a purpose, should the Mariners again find themselves thinking they are hot stuff.

With a 6-1 lead over a lame Brewers team about to be swept, the Mariners inexplicably blew past Milwaukee and voluntarily offed themselves with a four-run ninth for a 7-6 loss (box) that slackened 35,833 jaws at Safeco Field, then tightened them.

After eight home wins in a row and a chance to get 11 games above .500 for the first time this season, fans were ready to party. Then the Mariners dropped on them a magnum buzzkill, regressing violently in one inning to 1970s expansion ball.

“If you said we were going to have a three-run lead in the ninth and give the ball to Tom Wilhelmsen, I’d feel very good about it,” said manager Scott Servais. “He just didn’t have it today.”

Wilhelmsen, a former Seattle closer, was called upon because Servais made a pre-game commitment to stay away from using young closer Edwin Diaz, who had a combined 61 pitches in two previous saves.

Wilhelmsen gave up all four runs, starting with a leadoff homer to Keon Braxton — his second of the game — followed by a two-run shot from Chris Carter to tie at 6.

“It’s not often any one person can say they won a game in this line of work,” Wilhelmsen said. “But sometimes you can say you definitely lost a game.

After another hit, Servais finally pulled Wilhelmsen for Vidal Nuno. He gave up the decisive RBI single to Scooter Gennett, but only because his catchable fly ball to left center was misplayed by LF Nori Aoki.

“I felt the presence of (CF Leonys Martin) there,” Aoki said, explaining his wandering —  words that were no more helpful than those of Servais or Wilhelmsen, or even Aoki’s explanation of an earlier misjudgment. Broxton’s first homer in the fourth not only ended a no-hitter for spot starter Ariel Miranda, it too was catchable.

Addressing his failure to jump for the ball at the fence, Aoki said, “The ball carried more than I thought. The sun kind of got in my eyes. I didn’t really get a good read on the ball.”

Once the lead reached 6-1, thanks in part to two RBIs each from Aoki and 2B Robinson Cano, the play figured to be just another footnote in Aoki’s outfield misadventures. Then came the bigger mistakes.

The biggest seemed to be Wilhelmsen’s strategy with Carter, given his power (the homer was his 29th) and an open base at first, which seemed to beckon for an intentional walk with one out.

“We don’t want him to beat us,” Wilhelmsen said, “but you don’t just want to give in and say, ‘Here you go, sir, take first base.’ I got him out many times. That one just didn’t stay out enough.”

C Chris Iannetta confirmed the final pitch was ball four, but Carter lunged and made good contact. The ball barely cleared the right-center wall and glove of RF Shawn O’Malley. He made a lunge/leap that forced his glove thumb into the wall instead of over it.

O’Malley fell to the warning track in apparent pain, but it took several seconds before all witnesses, including Carter, realized he failed to bring the ball back.

Although it felt like several losses, the count was a mere one. The Mariners have won 12 of 16, and still possess the best record in the American League after the All-Star break.

But just as this group has developed a capacity for the extraordinary comeback, they also have a penchant for the pitiful collapse.

The saving grace for the Mariners is that humility management is a vital virtue for success in a pennant race. The Mariners had a fine practice Sunday.

On the rundown that wasn’t

Adding to the mayhem in the ninth was a play that ultimately meant nothing, but caused everyone in the house to dig divots in their scalps.

Trailing 7-6 with one out and the bases loaded, the Mariners retired Jonathan Villar on a medium fly to the right field foul line, from where O’Malley threw a strike to home to thwart a tag-up by Manny Pina from third base.

But the runner at second, Gennett, moved to third, and finding it crowded, retreated. Iannetta held onto the ball half way up the third base line, making no throw, nor a charge at the vulnerable runner, who returned safely to second.

“I’m conservative,” Iannetta said, explaining that attempting a play on Gennett might cause Pina to break for home, which was defended only by the pitcher, Nuno. He may have had to apply a tag or engage in a rundown, both risky for a pitcher. Better to lose a chance for an out than add to the rolling debacle, he said.

Nuno struck out Braxton, up for the second time in the inning, for the third out, rendering the play moot, except for anyone who saw it.