Big players decide big games. Clint Dempsey did so for the Seattle Sounders Sunday, while the Portland Timbers’ leading scorer observed most of the match from the bench. 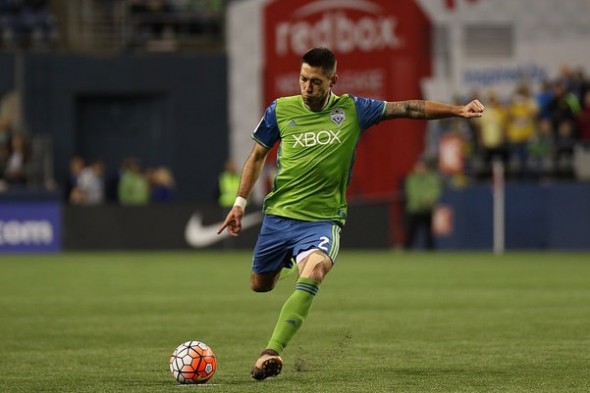 Rivalry games always come back to who shows up and who doesn’t. If you know Clint Dempsey, you know that he loves to dazzle on big stages. In front of a crowd of 53,302 at CenturyLink Field Sunday night and a national TV audience, Dempsey did it again, scoring two goals against the Portland Timbers as the Sounders won their third consecutive game, 3-1.

“Derby games are hard to play,” interim coach Brian Schmetzer after the match. “It’s hard for us to find a pace and a rhythm, but in the second half they found their rhythm.”

Fanendo Adi, Portland’s star striker who entered the night with 11 league goals, wasn’t in the lineup when the opening whistle blew, consigned to the bench amid rumors that he had not flown with the team to Seattle. Portland head coach Caleb Porter refused to comment on Adi’s relegation to the bench, saying that the matter was private.

In Adi’s place, Portland (8-10-8) summoned Jack McInerney, a 24-year-old striker who has impressed as a substitute or in a supporting role to Adi in recent weeks.

Seattle (9-12-3), meanwhile, took the “not broke, don’t fix it,” approach to its lineup, deploying the same roster for the third consecutive game, featuring an attacking front of Andreas Ivanschitz, Dempsey, Nicolas Lodeiro with Jordan Morris at striker.

The early game was back-and-forth, with both teams narrowly missing an opening goal on a number of occasions. Often, lateral passes by the Sounders were intercepted in the midfield by Lucas Melano or Darlington Nagbe, leading to quick counter opportunities that the back line was forced to sweep away.

Seattle broke the deadlock in the 60th minute when Cristian Roldan was tripped by Portland defender Vytautas Andriuskevicius along the right edge of the penalty area. Referee Alan Kelly pointed to the spot, and Dempsey stepped up to take it.

Dempsey missed a penalty a week prior against Real Salt Lake, but made no error here, putting the ball down the middle as goalie Jake Gleeson dove left.

Dempsey grabbed his second of the night, and eighth of the season, in the 80th minute, when he took a pass from Roldan and dribbled to the left atop the penalty area, drawing Gleeson with him. Dempsey then fired a left-footed shot on the ground back across the goal mouth.

Between the goals came an equally important stop from keeper Stefan Frei in the 67th minute. McInerney broke free of the Seattle back line as he received a pass from the right side. McInerney closed in on Frei, who sprawled as McInerney fired a shot stopped by Frei’s thigh.

“That save changed the game,” Schmetzer said. “Stefan is a great goalkeeper, and that save was a massive turning point. 1-1 is miles different than us getting ahold of the game.”

Caleb Porter bemoaned the miss from his striker.

“It’s unfortunate because he’s had a couple of those,” Porter said. “When you look at the DC United game, he missed on a breakaway that would’ve made it 1-1 for us. He’s a bit snake-bitten right now. Those are very good chances. Those are chances he usually scores. So you have to continue to have faith in the player.

“Obviously we train around goal every single week, but he certainly froze up in that moment . . . He knows it [and] feels bad about it but strikers miss chances like that. Dempsey missed one as well, an easy one. Even the best players miss those sometimes.”

The Dempsey miss Porter referred to came in the 51st minute, when Morris rolled a sure-thing pass into the middle, and Dempsey put the ball wide of an open net.

The final goal came courtesy of a Sounders corner in the 83rd minute. Lodeiro took the corner, which found Brad Evans for a flick-on header that got the ball to Roldan at the back side of the net.  He headed it home.

Adi made an appearance in the 72nd minute, replacing Melano. He tried to force his way into the game, but Seattle’s lead took away a great deal of Portland’s momentum. Adi finally notched the consolation goal for the visitors in the final minute of stoppage time, when he cleaned up a rebound ball that had forced Frei to dive for an attempted save.

Seattle took three points in a crucial home match, and denied them to the nemesis, which still clings to the last playoff spot in the Western Conference. The Sounders are unbeaten in the past four games.

Dempsey said that he felt he was getting more consistent service in the new attack plan, leading to the new success.

“Earlier in the season, I feel like (the missed shot) would have been the only chance that I got all game,” Dempsey said. “Now, if I miss a good chance I’m still going to have two more. If you get three good chances in a game, you’re going to put one away. I think that’s a good return.”

Seattle hopes for a good return to Portland Sunday, when it plays the Timbers for the final time in the regular season. Depending on the result of Wednesday’s road trip to Houston (6 p.m., JoeTV), the Sounders could travel to Providence Park in a position to jump the Timbers in the standings.