In his sixth season, Mike Morgan, a Pete Carroll recruit to USC and a special-teams ace, is finally getting a shot at a starting job with the Seahawks at SAM linebacker. 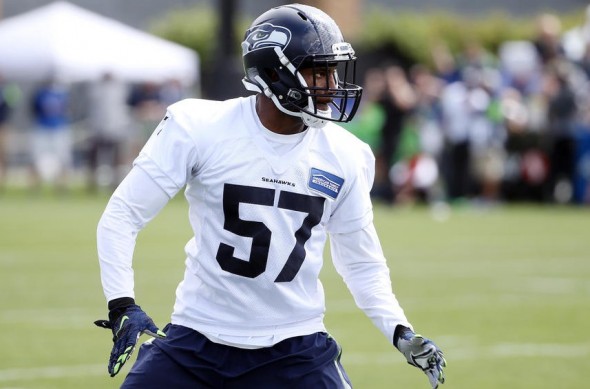 Special-teams ace Mike Morgan  has a shot at the starting lineup./ Seahawks.com

If a Seahawks fan were told that at seven years, FS Earl Thomas and SS Kam Chancellor were the longest-tenured Seattle defenders, there likely would no surprise. So . . . who’s tied with CB Richard Sherman and LB K.J. Wright at six years?

If you knew it was LB Mike Morgan, you have earned a gold star that accessorizes your blue/green face paint.

Combining longevity with obscurity is a hard thing in pro sports, although former Mariner Willie Bloomquist certainly set something of a local standard in baseball — 14 major league seasons, but only one with more than 350 at-bats.

Morgan is a gridiron Willie — a guy who seldom starts but is never out of a job.

Morgan, 28, has played in 67 regular-season games since showing up undrafted on the Seahawks doorstep in 2011, following four good years at USC — three under coach Pete Carroll.

He has started three times.

Morgan is among three guys attempting to succeed starting strongside (SAM) linebacker Bruce Irvin, who left for Oakland in free agency. The spot is a fairly rare vacancy on the defensive side, which under Carroll draws the most resources.

While the offense’s various intrigues draw most of the attention — scrutiny of Seattle’s O-line is nearly as intense as that of Hillary Clinton’s email servers — the defense again will be taxed in the early season with battering senseless its foes until the glory guys figure it out.

Or as offensive coordinator Darrell Bevell put it blithely Tuesday, ahead of Thursday’s third preseason game against Dallas, “I’d like to see some areas of improvement — we need to make sure that we’re putting points on the board.”

Meanwhile, the defense sorts through smaller issues, such as whether Morgan, the reliable, gets the start ahead of Cassius Marsh, the precocious, and Erik Pinkins, the mysterious.

The soft-spoken Morgan, who tends to get lost in circus of outspoken personalities in the Seahawks locker room, is about the last guy to go deep for a self-assessment.

“I just go out and do my job, man,” he said Tuesday. “Looking forward to playing Dallas. I just do what I’ve been doing —  be consistent, be physical, run to the ball and try not to make stuff up.”

As usual, Carroll speaks of Morgan as he would favorite slippers.

“Mike just continues to do things right,” he said after the Seahawks’ 18-11 loss to the Vikings Thursday. “He is really good at understanding the scheme, very accountable and he has always come through. He’s doing fine. The two other guys are trying to battle to make some noise for their opportunity to play there.”

Against Minnesota, the opportunities came for Marsh. The third-year pro from UCLA had 30 snaps, some with his hand on the ground as an end. Morgan had nine and Pinkins six.

The job is a hybrid — some rushing, some pass coverage. The Seahawks could end up using all three in rotation, depending on down, distance and match-up. All must have a big role on special teams, where Morgan excels.

Asked for an evaluation Thursday, Carroll said, “Mike played well, Cassius played very well, and Pink did OK. He just needs more reps, as does Cassius, to show us. There’s a lot of things have to happen.

“I have said to you from the start, there’s no reason to rush to judgment on this. Eventually, they will accumulate a hundred plays or so, so we will have a pretty good sense of what is going on.”

Morgan goes back to his freshman year of 2006 with Carroll, who jokes that they’ve been together for 15 years.

“He’s as dyed in the wool as you can get,” Carroll said last season. “He’s been with us for so long, and he’s always been a terrific team member. He has the flexibility to play all the spots. Everything makes sense to him.

“He’s also a very good teammate in terms of helping his other guys around him understand, learn, and what we expect and all of that. He’s been a great player for us for a long time. We’ve been very lucky to have him.”

Even at the elite level of pro sports, there’s room for guys who are more deed-doers than game-breakers. Ask Willie Bloomquist.