Cristian Roldan has gone from being an emergency starter in last year’s depleted midfield to a formidable starting midfielder for the Seattle Sounders. 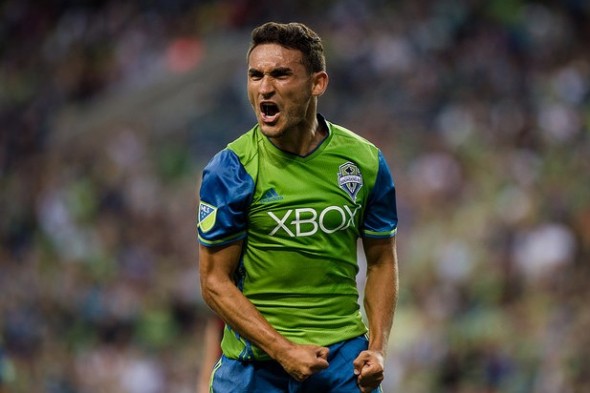 Cristian Roldan has elevated his game. People are taking notice both at the Sounders and the international level. / Jane Gershovich, Seattle Sounders FC

Seattle Sounders midfielder Cristian Roldan started his second season in MLS hoping that he could work his way into a starting spot by the end of the year after making 11 starts as an emergency replacement in 2015. Now, 24 games in, the 21-year-old has played in all but one match for the Sounders and has started 18, scoring three goals and  three assists, to become a crucial part of Seattle’s midfield.

In a 3-1 win over the Portland Timbers Sunday, Roldan drew a penalty that led to Seattle’s first goal, assisted Clint Dempsey’s game-winner and added an insurance goal with his head in the 83rd minute.

“(Roldan) is a kid that will do whatever it takes, sacrifice whatever, to help the team win,” Schmetzer said. “His commitment to the team, his eagerness to learn, all of those qualities that he has, that’s what you see out there. He is a tremendous talent and we’re only hoping for bigger and better things for him.”

Roldan’s fortunes have benefited from increased playing time in the midfield alongside Osvaldo Alonso, who was injured for large stretches of the youngster’s initial minutes last season. The veteran presence has helped Roldan’s game. So too, have encouragementst from the coaching staff to make more runs forward when in possession.

The arrival of Nicolas Lodeiro has helped Roldan as it has the rest of the midfield, giving him another target in the central midfield, providing options for a more fluid attack.

The change has been fruitful. All his goals and two of the three assists have come in the last seven matches, starting with his debut pro goal against FC Dallas July 13.

Schmetzer has taken notice, and raised his expectations for Roldan accordingly.

“I’m going to demand that he goes to the next level, because I have confidence in him,” Schmetzer said after Sunday’s win. “I think he can go to the next level. Where that is? I can’t say, but he allows me to have a little bit of freedom. When I inserted (Erik Friberg) into the lineup, and Cristian moved out wide, he didn’t miss a beat. Overall, the team was great, and Cristian has a big part in that.”

Sounders staffers aren’t the only ones who have taken notice. Roldan, who starred the University of Washington in 2013 and 2014, helping the Huskies win a Pac-12 Conference title, confirmed recently that he had been contacted by the Guatemala national team coach Walter Claveri about a potential call-up for World Cup qualifiers.

“People have reached out to me, because of being a consistent starter now, because of Erik’s injury,” Roldan said Aug. 16. “It’s opened a few doors, and hopefully I can open a few more. My goal is to do the best I can for the team and help us make the playoffs.”

Due to FIFA eligibility requirements, Roldan has to bide his time before he receives a potential nod from U.S. head coach Jurgen Klinsmann. If Roldan played for Guatemala or El Salvador, both FIFA and the nation the football association would have to release Roldan if the USMNT sought him.

Roldan has maintained that despite the interest from Central America, his play with the Sounders is his primary focus. If Roldan’s commitment, highlighted by all in the Sounders locker room who are asked about him, is as absolute as Schmetzer claimed, then the statement is far from surprising. A benefit of his loyalty to Seattle, however, could also buy time for him to show up on Klinsmann’s radar and play his way into a spot for his home nation’s team.

There still hasn’t been much murmured about interest in Roldan from the U.S. camp. He will be 23 when the 2018 World Cup in Russia rolls around, and if he continues to develop as he has through his second year, he could become an important addition to the men’s national team.

In the meantime, Roldan’s rise continues to benefit his club at every turn. The appreciation showed by the coaching staff in starting him is translating to positive play at both ends. Roldan’s star may rise quite a bit higher.