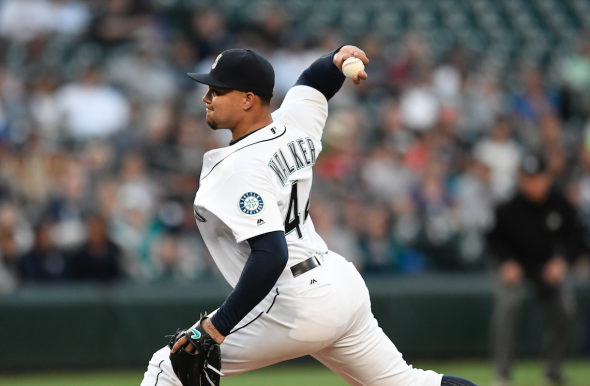 Upon his return to the Mariners, Taijuan Walker did well until the fifth inning. / Alan Chitlik, Sportspress Northwest

Walker seemed in control until the fifth inning, when the Yankees scored two quick ones on a home run from Jacoby Ellsbury, who showed some rare pop with his sixth home run of the season, giving the Yankees a 3-1 lead.

Walker’s latest chance to prove himself looked a lot like his previous starts. Dominant early on, he got into some trouble and started to unravel. Manager Scott Servais pulled him in the sixth, leaving Walker with a line that included four runs (three earned) off six hits over 5.2 innings.

Vidal Nuno came on and cleaned up Walker’s mess in the sixth. The Mariners got through the final three innings with Tony Zych (activated from the DL earlier in the day) and Wade LeBlanc (making his second appearance out of the bullpen).

The return of Walker and James Paxton’s expected Thursday start leaves Seattle with six starters, so LeBlanc was put to use in long relief.

The Mariners had three hits in the third and fourth innings, but that was about it. Sabathia retired nine in a row before the bullpen took over. The biggest of Seattle’s hits was a CF Leonys Martin triple in the third; he scored the Mariners’ only run on a SS Ketel Marte single. 2B Robinson Cano had a pair of hits, while fellow heart-of-the-order stars DH Nelson Cruz and 3B Kyle Seager went a combined 0-for-7.

“The story tonight was our offense got shut down. That’s the first time that’s happened
in a long, long time.” – Servais

“They can definitely hit the ball out of the ballpark. Sabathia did a really nice job and gave us the seven innings that he did, was outstanding.” — Yankees manager Joe Girardi

When Walker was called up, it meant Monday starter Cody Martin was on his way back to Tacoma . . . Zych was activated after spending 2½ months on the disabled list. To make room , the Mariners sent OF/1B Stefen Romero to Tacoma . . . LF Guillermo Heredia, recalled from Tacoma Monday, was in the leadoff spot Tuesday . . . Sabathia is 9-1 with a 2.09 ERA over 13 career starts at Safeco Field.

One of the biggest pitching matchups in baseball – well, Japanese baseball – will be going on at Safeco Field  starting at 12:40 p.m. Wednesday. RHP Hisashi Iwakuma (14-8, 3.78 ERA) and Yankees RHP Masahiro Tanaka (10-4, 3.24 ERA) match up for the series finale. Tanaka already has one win over his former Tohoku Rakuten Golden Eagles teammate this season, out-dueling Iwakuma 4-3 in an April game at Yankee Stadium.