The Seahawks offense finally became productive with three eye-catching touchdowns in a 27-17 triumph Thursday over the Cowboys, who had only three plays before QB Tony Romo was hurt. 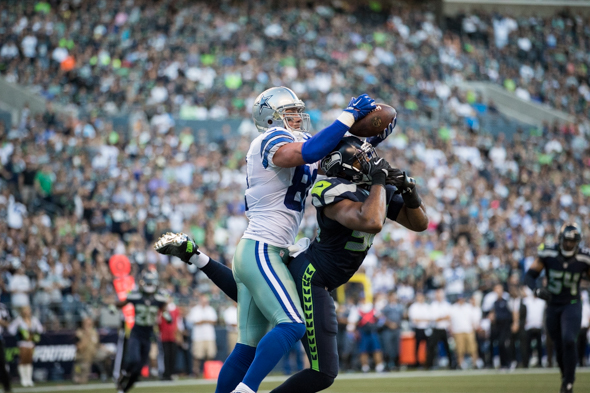 It wasn’t time to set off the emergency klaxons, but QB Russell Wilson must have sensed the unease at the Clink after the Seahawks’ No. 1 unit failed to score in its first six preseason possessions. On the seventh try Thursday night, Wilson unleashed such a masterpiece of a touchdown pass that thousands of antacid tablets were thrown away in glee.

Wilson rolled right, then lofted the ball the other way, across his body, with the perfect parabola to drop into the hands of a well-covered WR Paul Richardson in the end zone. The nine-yarder in a non-counter likely will be little noted nor long remembered, but if Seahawks fans need a public point of ignition for the 2016 season, that moment with 3:17 left in the first half will do nicely.

“Great throw and catch,” coach Pete Carroll said. “Really nice execution. We’re seeing a lot of things we can count on, as we’re seeing it in practice. That’s a good sign.”

Not only did the play put the Seahawks up 10-7 on the way to a 27-17 triumph, it looked stupendous compared to the Dallas Cowboys, whose porcelain QB, Tony Romo, didn’t make it past the game’s third play without injury.

Romo was pulled down hard on his butt during a sack by DE Cliff Avril and reached for his back. He remained down for a couple of minutes before walking off under his own power. Shortly after that, he was moving around on the sidelines normally. But Cowboys coach Jason Garrett, crushed by a 4-12 record last season largely from the injury absence of Romo, who at 36 has not played a complete season since 2012, chose not to risk further assaults by Seattle’s No. 1 defense.

“We don’t think there’s anything serious,” Garrett said. “He was campaigning to get back in the game.”

On the Seahawks sidelines, the prognosis after two desultory games against Kansas City and Minnesota was good. Wilson, who started and played two series into the second half, completed 16 of 21 passes for 192 yards. He also went unsacked, a credit to the heavily scrutinized line that worked better when Wilson unloaded more quickly.

The first TD was a result of a pattern rehearsed multiple times in warm-ups.

“I think I threw 36 balls, or something like that,” Wilson said of his pre-game routine. “The funny thing is Paul Richardson is the guy who comes out there pre-game with me and we work on throwing those corners into the end zone. It’s just more of a visualization thing, understanding and just seeing it. It was just like pregame warm-up.

“He made a great catch with a guy (CB Morris Claiborne) all over him.”

In the second half, the Seahawks did damage on the ground, with 126 yards on 20 carries, including runs of 20, 17 and 10 yards by RB Christine Michael on his first three carries of the half. He looks to be a stronger complement to starter Thomas Rawls than anyone imagined at the start of training camp.

Part of the success included newcomer RT J’Marcus Webb, who saw his first game action after sitting out the first two games with a twisted knee. He seemed to acquit himself well, as did Garry Gilliam, who played both tackle positions. The tackles are the most uncertain spots on the team’s most uncertain unit.

The offense had 370 yards and three TDs, the final two of which were nearly as spectacular as the first one.

Nine minutes into the third quarter and facing a third-and-four at the Dallas 9-yard line, Wilson dropped back and twice eluded Dallas rushers with reverse pivots until he came forward to drill WR Tyler Lockett in the front corner of the end zone, catching it standing still.

“I’m surprised he didn’t get dizzy,” said Lockett of Wilson. “I just had to get open and stay open.”

The final TD came after Wilson turned things over to backup Trevone Boykin, who in the fourth quarter completed a 72-yard drive with a Wilson-like escape-and-scamper down the sideline for a 16-yard rushing score.

“We had a certain protection and we didn’t necessarily get it picked up the way we wanted to,” Boykin said. “A guy came free and I made him miss. I tried to look for a guy downfield and as I kept going, I got closer and closer to the touchdown and I scored.”

Wilson and Boykin “did a nice job of running when they needed to,” Carroll said. “The protection on a couple of the scrambles was excellent. They had a chance to hang in the pocket and look, look, look and then take off. I’m really fired up about the progress that we’re making there.”

“We’re really trying to be the best scrambling team there is. It just showed again. It’s great affirmational football.”

Carroll also affirmed his delight with the kicking game supplied by punter Jon Ryan and PK Steven Hauschka, who hit two field goals, one from 53 yards.

“Our kickers are doing great,” he said. “Jon is ridiculously on fire right now and Hauschka keeps hitting all of his stuff, too. That’s not to go unnoticed. I’m really fired up for those guys. Our kicking game should be very solid. We have a really good chance with Tyler back on there on the returns.”

A little less encouraging for Seattle was the first-unit defense, which gave up 194 yards in the first half as the Cowboys used rookie RB Ezekiel Elliott and their heavily invested line to gash away. Rookie QB Dak Prescott jumped in for Romo and completed 15 of 19 passes for 106 yards.

But the biggest chore of the evening was to get the ones to make sixes. It was done so sublimely that it was hard to remember what the problem was. 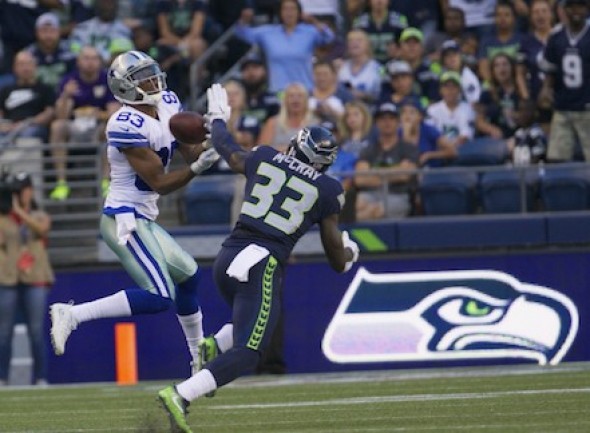