Nicolas Lodeiro, the new conduit for Seattle’s attack, may not be in the lineup Sunday if the Uruguayan Football Association pressures him to join the national team ahead of a World Cup qualifier. 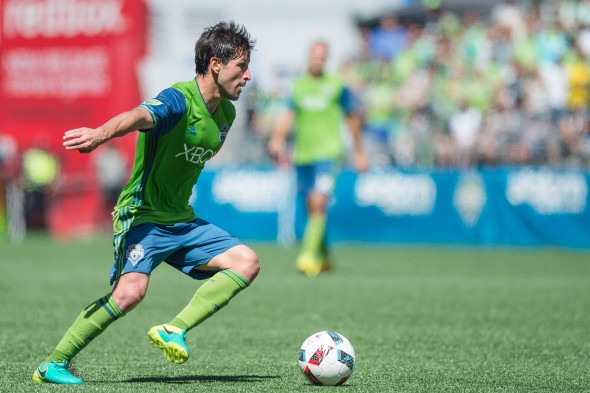 Uncertainty surrounds the status of midfielder Nicolas Lodeiro for Sunday’s match due to a potntial call-up for his native Uruguay. / Jane Gershovich, Seattle Sounders FC

Ahead of a crucial road test in Portland Sunday (2 p.m., ESPN), uncertainty surrounds the status of Nicolas Lodeiro, Seattle’s newest designated player and the man widely credited for orchestrating an on-field turnaround in which the Sounders are unbeaten in their last five matches.

Lodeiro, a Uruguayan national, may be unable to play due to a national team call-up for World Cup qualifiers, with training camp set to begin the day after the match. Lodeiro played the full 90 minutes in the 1-1 draw against Houston Wednesday, scoring in the fourth minute of stoppage time to seize a point. After the match, interim head coach Brian Schmetzer was asked if Lodeiro playing the full game was a concern.

Schmetzer’s comment suggested he is confident that Lodeiro will be with the team Sunday, but Uruguay Thursday has a big qualifying match against Argentina, which lost the 2014 World Cup final to Germany.

In recent tournaments, Lodeiro has played a diminished role in Uruguay’s midfield, making only one appearance in the recent Copa America before Uruguay was eliminated in the group stage. But the Uruguayan Football Association may lobby with the Sounders and Schmetzer to limit Lodeiro’s minutes Sunday to keep him fresher.

Seattle has given no hints about Lodeiro, which is unsurprising given the desire to keep things under wraps when facing the premier rival.

The Sounders may have to prove that they can get the job done without their latest attacking threat. A strong showing without the Uruguayan would make a statement that the club is evolving past over-reliance on one or two players.

To be effective, the team needs Lodeiro. For that reason, it is important that the 27-year-oldltake the field with Seattle at Providence Park Sunday, though overtaxing him might affect his status for future call-ups.

Seattle and Uruguay each have need of a healthy Lodeiro. For the Sounders, a key to victory will be if club or country sways the midfielder’s decision-making.