3B Shawn O’Malley made the play of the game and Edwin Diaz notched a five-out save as the Mariners ended a three-game losing streak Friday night in Chicago. 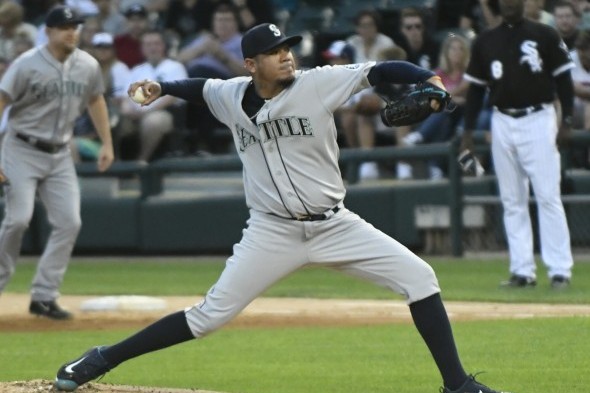 Rookie Edwin Diaz escaped a one-out, bases-loaded jam in the eighth with a mere four pitches, then fanned the side in the ninth, mainly on fastballs near 100 mph, for a five-out save in the Mariners’ 3-1 win over the Chicago White Sox Friday night at U.S. Cellular Field (box). Diaz not only preserved Felix Hernandez’s ninth win (9-4, 3.14), but made sure the Mariners (68-60) snapped a three-game losing streak.

The Mariners, who weathered a 14-strikeout, no-walk performance by Chicago ace Chris Sale, cut the Rangers’ AL West lead to 6½ games (the Rangers lost to Cleveland 12-1). Seattle moved to within two games of the second wild card slot as Baltimore lost to the Yankees 14-4.

Highlighted by a Franklin Gutierrez solo homer and an Adam Lind RBI double, the Mariners took a 3-0 lead into the seventh with Hernandez playing every bit the role of ace. Then Todd Frazier hit a solo home run, setting up a dramatic eighth.

In the eighth, a tiring Hernandez loaded the bases by allowing two singles and a walk, forcing manager Scott Servias to summon Diaz, who drew SS Tim Anderson with one out. Anderson knocked a slow roller that 3B Shawn O’Malley, making his third consecutive start in place of injured Kyle Seager, snatched barehanded and fired home to C Mike Zunino to force J.B. Shuck for the second out. Diaz then got Jose Abreu on a pop-out to set up his 1-2-3 ninth.

After the game the Mariners sent down LF Nori Aoki to Tacoma and expect to make more moves Saturday . . .The Mariners collected five hits off Sale, only two for extra bases and none after the fourth inning . . . The home run by Gutierrez in the second inning, his 12th, snapped an 0-for-15 slide . . . New call-up Guillermo Heredia got the start in left, and went 0-for-4 . . . Robinson Cano went 0-for-4 and fanned three times . . . The Mariners went 2-for-6 with runners in scoring position and stranded two.

Hernandez allowed one run on eight hits with five strikeouts and two walks. He threw 104 pitches, 67 for strikes, in registering only his second career win (first since April 2009) at U.S. Cellular Field. Hernandez is 5-0 in eight starts since coming off the disabled list . . . Hernandez had what he described as a “scary” moment before the third inning. “Everything went black,” he said. “I couldn’t feel my legs and I was a little dizzy. I had a few Red Bulls and that was probably what it was.” . . . Diaz threw 17 pitches, 14 for strikes, and notched his 11th save in 11 chances.

“We had tremendous pitching tonight and we needed it. Felix kept them off balance. It was a big night for our club and our bullpen. What a play by Shawn O’Malley to come in and bare-hand that ball. That was the play of the game. Thank God we got some runs early because after the fourth inning we had no chance against Sale.” — Servais

“I didn’t expect it to be that slow but I had a good throw to Mike to make the play and get the out.” —  O’Malley

“I knew I needed to go deep into the game today and was able to do that. I’m feeling better and better every time I go out there. I had some good secondary pitches. O’Malley made a great play.” —  Hernandez