The Sounders played 45 minutes of promising soccer Sunday, but that stretch was preceded by a 4-0 shellacking in the first half on the road in Portland. 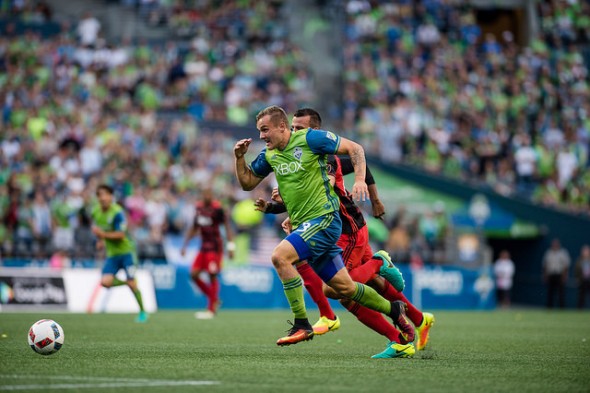 PORTLAND – Sunday’s Cascadia Cup clash at Providence Park greatly resembled the 100-meter dash —  if one runner wore earplugs and missed the starting gun. In the first half, Portland put up four goals against a sleepwalking Sounders’ back line, after which a quick pair of second-half goals restored some element of drama in Seattle’s 4-2 loss.

“I’m trying to think if I should say, ‘They played really well,’ or was it something we did wrong,” coach Brian Schmetzer said. “I take the blame for the first half. It’s my job to make sure the team is prepared, and obviously that didn’t happen. Give credit where it’s due, I think Portland came out, scored a timely goal, started us reeling backwards.”

Coming out of the gate, the Timbers had it all. After a 3-1 Sounders victory Aug. 21, the atmosphere at Providence Park was raucous and rife with tension. The Timbers fed on the energy. Seattle, by contrast, was the ultimate have-not — sluggish, uncoordinated and without its marquee player.

Clint Dempsey remained home while being monitored for an irregular heartbeat. Without his presence, the midfield was blunted. Seattle (9-13-4) could not conduct the game through Nicolas Lodeiro, who drew the most attention from Portland’s defensive midfield.

As a result, the Sounders committed cheap turnovers on lateral passes, similar to the previous contest. Sunday, though, the Timbers were set to finish their chances, or drew fouls setting up crucial set pieces. They also benefited from the services of Fanendo Adi for 90 minutes.

Adi, who sat for the majority of the Aug. 21 game after allegedly missing the team flight to Seattle, wreaked havoc with center backs Chad Marshall and Brad Evans as they tried to combat the Nigerian’s size and strength when the ball came forward.

Portland (9-10-8) took the lead in the 16th minute, when Diego Valeri sent in a corner kick from the right side that found left back Vytautas Andriuskevicius in front of the net. Sounders keeper Stefan Frei got a hand to Andriuskevicius’s header, but it deflected off the crossbar and bounced into the net for the Lithuanian’s first MLS goal.

Five minutes later, Valeri dribbled into the area after Lucas Melano let a through ball go between his legs to set up his teammate. Frei made a sprawling save with his left hand, but Valeri’s rebound fell in front of Adi, who tapped it in.

Melano added a goal of his own on a low cross from Diego Chara in the 29th minute when Seattle’s back line lost track of him.

The final insult came from a Valeri free kick that found center back Steven Taylor at the back post for Taylor’s debut goal as a Timber in his second game for the club.

The four goals in one half ties the club’s worst defensive performance — the fourth time Seattle has conceded a first-half quartet.

Evans, the Sounders captain, was critical.

“We played like crap in the first half; we played directly into their hands,” Evans said. “Forcing the ball in to the top of the box — that’s their bread and butter. They made us pay for that.

“Obviously, everybody was disappointed. Schmetzer came in and said, ‘We’re going to do one thing. We’re going to play for the badge. If you don’t do that, I’ll take you off.’”

It is unclear if that symbol motivated Schmetzer’s two halftime substitutions, but starters Tyrone Mears and Alvaro Fernandez were replaced by Román Torres and Herculez Gomez, respectively. The appearance of Torres was his first action since he tore his ACL in  September.

Torres played center back, while Evans pushed out right to replace Mears. Torres exerted himself on the game, throwing his weight around to win headers, stop crosses, and shove around Adi after he collided with Osvaldo Alonso.

Seattle scored two goals in the opening six minutes of the second half. The first came in the 47th minute when Andreas Ivanschitz took a right-footed shot that deflected off the head of Portland’s Taylor and into his own net. It was his third goal of the season.

Jordan Morris added another in the 51st minute, after he headed a ball over Portland keeper Jake Gleeson to make it 4-2.

From there, though, the Sounders stalled, despite out-shooting the Timbers 9-1 over the final 39 minutes.

Several players who played long minutes in a grueling 1-1 draw at Houston Wednesday were on shaky legs toward the end of the match, but Schmetzer said he would accept no excuses for the loss.

“I won’t make excuses for heat, travel, multiple games in a week,” he said. “We won’t make that excuse, not as long as I’m here.”

The Sounders take a week-long break to accommodate the international calendar and World Cup qualifying matches before traveling to Avaya Stadium to face the San Jose Earthquakes Sept. 10 (7:30 p.m., JoeTV).

The break may buy time for Dempsey’s medical issue to clear up, but the Sounders will also take care to unplug their ears. They would hate to miss the starting whistle again.

Six players were called up for their respective national teams ahead of the international break for qualifying matches for the 2018 World Cup, the club announced Sunday.

USMNT boss Jurgen Klinsmann seems to have taken notice of rookie Jordan Morris, who has a club-best nine goals. Morris will join the U.S. for its final two matches of the group stage, where it sits in second place, three points behind Trinidad & Tobago in Group C.

Morris, who was omitted from the U.S. roster for the Copa America Centenario and was part of the U-23 team’s failed campaign to qualify for the 2016 Rio Olympics, said it was good to receive the call-up.

“Obviously, it’s a huge honor,” Morris said. “Whenever you get to represent your country, it’s amazing, and (after) not making the Copa team, it’s exciting to be back.”

Two Sounders will represent their home countries in South American qualifying matches. Recent arrival Nicolas Lodeiro will play for Uruguay when they face off against Argentina Sept. 1 before hosting Panama Sept. 6. The Panamanian squad will be bolstered by the presence of Sounders center back Román Torres, recently recovered from a torn ACL, who is the national team’s captain.